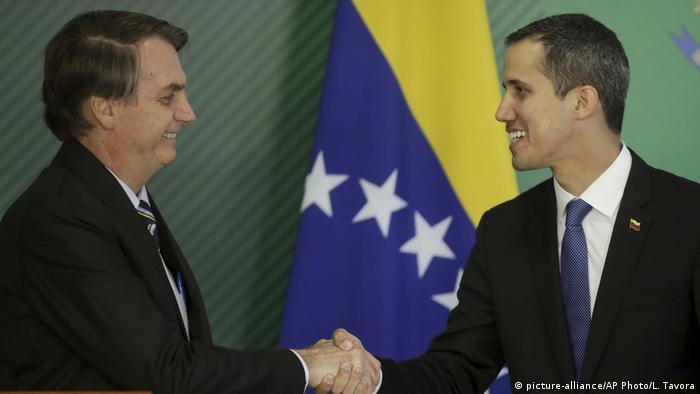 Brazil quietly recalled its entire diplomatic corps from neighboring Venezuela early on Friday, as tensions escalate between the government of far-right President Jair Bolsonaro and the authoritarian regime of his Venezuelan counterpart Nicolas Maduro.

"No-one will remain in all of Venezuela," a government official told French news agency AFP. Bolsonaro has also ordered all of Caracas' diplomatic staff to leave Brazil.

The move came on the heels of Bolsonaro calling Maduro a "dictator," to which Maduro responded that the Brazilian leader was a "fascist."

Brazil withdrew its last ambassador to Caracas in 2016, but it still had foreign service staff working from its diplomatic compound.

Longstanding tensions between the two countries over the authoritarian governments of Maduro and his predecessor Hugo Chavez, whose policies have led to widespread lacks of food and medicine, have escalated the past year. Bolsonaro was one of 50 leaders to recognize the claim of Maduro's rival Juan Guaido to the Venezuelan presidency, and more recently, Venezuela accused Brazilian forces of attacking Venezuelan soldiers who were trying to claim asylum on the border.

Maduro said Bolsonaro was trying to start an "armed conflict."

Brazil rejected the claim, with the foreign ministry saying it "does not comment on statements from the dictatorial government of Maduro."

There are some 10,000 Brazilians living in Venezuela who could be affected by the sudden decision. Bolsonaro's administration has said it is "considering how assistance will be provided" to those people.

Bolsonaro pulled the diplomatic corps shortly before a trip to the US tomeet with President Donald Trump, and the pair are expected to discuss Venezuela as well as investment and bilateral ties.

Venezuelan opposition leader Juan Guaido flouted a travel ban to travel to Washington, Brussels and Davos. After three weeks away he's back, hoping to reignite discontent against President Maduro. (12.02.2020)