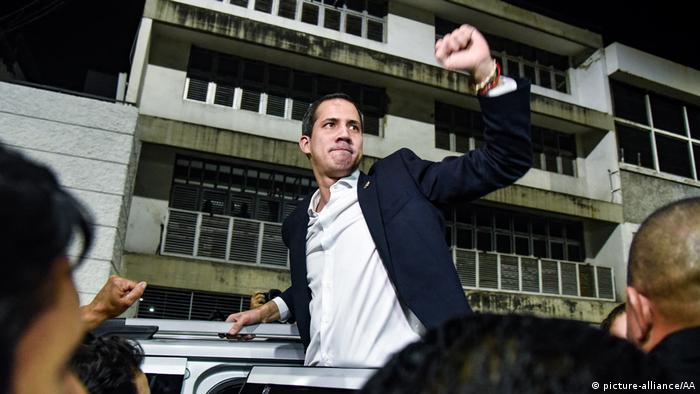 Juan Guaido, opposition leader and internationally-recognized interim President marked his return to Venezuela from a three-week trip abroad with a speech. He hoped to reignite public momentum behind his campaign to overthrow President Nicolas Maduro.

"Today more than ever we have to make our presence known," Guaido told a crowd of around 500 supporters in a plaza in the capital, Caracas. "This is not the time to go back. It's time to move forward.''

He appeared bolstered by his meetings abroad where he met with US President Donald Trump as well as European leaders and visited the World Economic Forum in Davos.

As he landed he tweeted "I bring back with me the commitment of the free world, ready to help us regain democracy and freedom."

Guaido told supporters at Tuesday night's rally that he is holding back some details from his foreign meetings that he is not able to talk about publicly. "Stay tuned,'' he said to the crowd. He defied a travel ban imposed by Maduro's government

Guaido-backers cheered him while pro-Maduro supporters shouted insults and hit his car with sticks and traffic cones, following his arrival at the airport.

Two journalists were severely beaten by Maduro supporters while trying to cover the event, according to the National Union of Press Workers in Venezuela (SNTP).

Maduro called on supporters to "defend" Venezuela and "let's not get distracted by stupidities, by dummies, by traitors to the homeland" in a reference to Guaido in a state television broadcast.

What's been happening in Venezuela?

Guaido declared himself the country's acting president in a direct challenge to Maduro in January 2019 after Maduro's 2018 re-election was denounced as rigged. More than 50 nations recognize Maduro as the interim President of Venezuela.

In early 2019, Guaido enjoyed enthusiastic support from people unhappy with Maduro and the state of economy. Guaido has been finding it increasingly difficult to maintain the momentum of earlier protests despite encouraging crowds to stage regular protests in a bid to pressure Maduro to leave.