Thousands of Guaido supporters have protested in the capital in the latest attempt to drive Maduro from power. However, Venezuela's armed forces remain loyal to the socialist ruler. 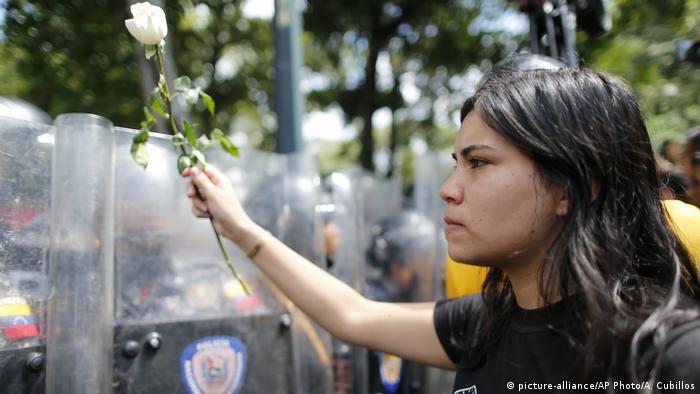 Venezuela's opposition leader Juan Guaido led thousands of his supporters through the streets of the country's capital on Saturday to demand the departure of President Nicolas Maduro.

In a speech, Guaido called on his supporters to remain in the streets in the upcoming days, reminding them how civilian action ousted Bolivia's Evo Morales only six days earlier.

In other parts of the city, Maduro supporters wearing red shirts prepared for a scheduled rally at the presidential palace in the center of Caracas. Maduro's socialist party also called upon its members to demonstrate in solidarity with his ally Morales, who is currently in exile in Mexico.

"If we stay at home, we will lose,'' Guaido said before marching with demonstrators to Bolivia's embassy in eastern Caracas. "Today, tomorrow and Monday — we will be in the street."

One protester, Deborah Angarita, a 60-year-old retired office worker, said while the rally was not large, she felt determined to "stay in the streets until the regime leaves."

Lisbeth Guerra, another protester, said she closed her two electronics shops to attend the protests. "More than anything, I want other nations in the world to take note of our crisis."

Saturday's crowds, although larger than they have been in months, still lacked the size and combativeness of January's protests when Guaido declared himself president. It remains unclear whether the rally will be able to sustain momentum.

On January 23, Guaido condemned Maduro's reelection as illegitimate and announced that he was assuming presidential powers pending new elections. He argued Maduro had "usurped" power and violated Venezuela's constitution by starting a second term.

Guaido received international backing, with more than 50 countries recognizing him as the country's legitimate president. However, despite repeated efforts, Guaido has failed to force Maduro from office.

The opposition leader encouraged crowds to stage regular protests in a bid to pressure Maduro to leave. "Today we have to continue advancing the protests until we obtain the freedom of all Venezuela," he told protesters.

Differences between Bolivia and Venezuela

Venezuela's economic crisis has led more than four million civilians to leave the country in search of better access to food and medicine. Everyday hardships have left many civilians feeling weary of change as they struggle to make ends meet.

Critics blame the country's economic collapse on years of socialist government. But Maduro points to US-backed right-wing forces who he claims intend to overthrow him to take control of the country's enormous oil reserves.

"The streets of Caracas are filled with joy with people defending their right to democracy,'' Maduro tweeted. "Let's tell the world Venezuela is strong, in peace and building a socialist homeland.''

The country's armed forces remain loyal to Maduro, whereas in Bolivia, a combination of street protests and military pressure led Morales to resign amid allegations of electoral fraud.

However, some protesters remain hopeful.

"I know there's a small chance Guaido will get Maduro out," said Rosmely Guerra, a sociology professor. "But even if there's just a 1% chance, I'm going to throw 99% of my faith behind it. What other option do we have?"