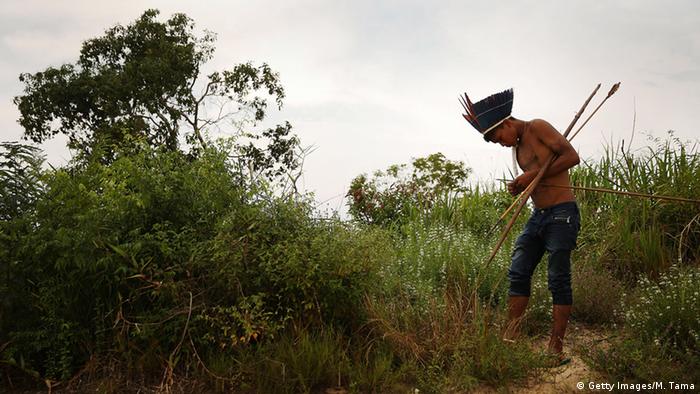 The funeral of an 87-year-old indigenous woman of the Borari ethnicity mobilized an entire neighborhood on March 20. Hundreds of people showed up to pay their respects to the victim in Santarem, a city in Brazil's Amazon region. Despite the loss the atmosphere was festive, with attendees performing a local carimbó dance.

Ten days later, the local government announced a delayed diagnosis detailing the cause of the woman's death: a coronavirus infection.

Read more: Coronavirus: Brazil is headed toward a 'perfect storm'

"Santarem could turn into a major epicenter for COVID-19 in the interior of the Amazon," said neurosurgeon Erik Jennings. The hospital where he works, Hospital Regional do Baixo Amazonas (HRBA), is already caring for two patients who went to the ceremony. Both have severe symptoms, and one is a confirmed COVID-19 case.

Santarem is the region's commercial hub, and it welcomes about 300 million tourists per year. And the city is the only specialized treatment option for 1.1 million people in western Para state, a region with a high concentration of indigenous territories.

"We haven't equipped the villages with the minimum technological or human resources to solve things in these communities," said Jennings. "The structure for the indigenous health system was based on a model that doesn't even work for white people during a pandemic."

There were four confirmed COVID-19 cases as of April 3. HRBA only has 20 hospital beds for adults in the intensive care unit and the municipal hospital has seven, meaning Santarem's hospital system could soon be overloaded. That wouldn't only compromise the hospitals' response to the coronavirus outbreak, but also to regular health services.

Jennings splits his time between the surgical center at the HRBA and a small hospital inside the indigenous territory Zoe, an isolated Amazon community. He first started working in the village as a volunteer 20 years ago, later joining the Health Ministry's Secretariat for Indigenous Health.

Since 2007, the hospital has been conducting complex surgeries and exams that respect the community's worldviews and customs. The pioneering initiative became a point of reference for the United Nations and the Health Ministry when they drew up a list of recommendations to help communities that are isolated or have only recently been contacted.

The objective of the initiative was to decentralize the hospitals' specialized services in big cities. The current system forces patients to travel, raising the risk of infection for communities that haven't already been exposed to certain diseases and could be decimated by a simple flu.

"Indigenous people who have to leave their villages to be treated will be exposed on the plane, in the ambulance and then in the hospital where people who don't have COVID-19 will be infected," said Jennings. 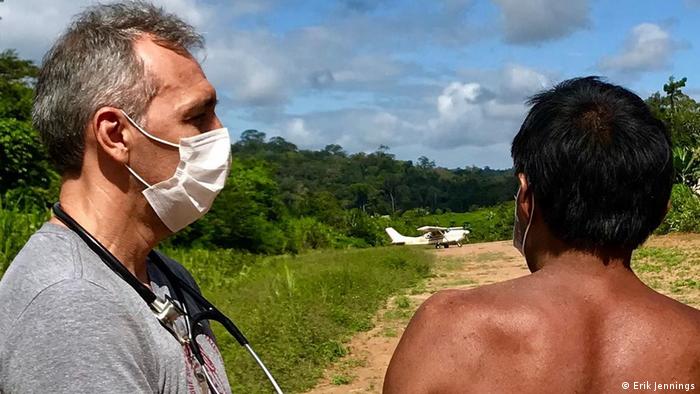 Not only do indigenous patients have to be moved to hospitals, but medical professionals are also forced to travel to the villages. The first confirmed COVID-19 case among indigenous communities in Brazil was actually an indigenous health official in Amazon state. She and 26 other people were being monitored after they had had contact with a local doctor who was diagnosed with COVID-19 after returning from a vacation.

In remote areas of the Amazon, where health teams tend to spend 15 days in the villages, this period has been extended to 30 days. Health care workers then have to isolate in the closest municipality for a fortnight, to reduce the risks caused by traveling. But it remains unclear who will pay for the professionals' accommodation in cities where they don't reside.

"The teams are very confused. Some professionals are paying for masks out of their own pockets because there's a lack of personal protective equipment. Others are scared of being asymptomatic and bringing the virus to the villages," said Marina Corradi, who monitors 16 supervisors of the program Mais Medicos (More Doctors) in northern states.

On Thursday, the Secretariat of Indigenous Health announced it would distribute rapid testing kits to detect COVID-19 among teams that visit the villages. It also announced that it would buy supplies and more protective gear, to ensure health professionals don't take the virus to communities they are treating.

Meanwhile, the Health Ministry has said the 500,000 rapid tests that have been distributed across Brazil have a 75% chance of error when they test negative for the new coronavirus.

At increased risk are communities that live in complete isolation. Specialists have warned that these ethnicities might be entirely wiped out in a genocide if the virus reaches them, an event that has occurred throughout Brazilian history.

In late March, federal prosecutors asked police to investigate a report made by indigenous leaders that said American missionary Andrew Tonkin was preparing an expedition to indigenous territories in Javari Valley. The move would go against the no-contact policy for isolated communities enshrined in the Brazilian constitution.

Last October, Brazil's agency for indigenous affairs, Funai, discharged Bruno Pereira, who coordinated the department for isolated communities. He had previously led the biggest expedition to an isolated tribe in the past 20 years, a rare project meant to prevent potential conflict between groups.

Funai replaced Periera with former evangelical missionary Ricardo Lopes Dias, a decision that caused a furor among activists. Many saw this appointment as an attempt to spread Christianity among indigenous communities.

"Despite its name — National Indigenous Foundation — Funai has abandoned its main objective of protecting and monitoring Brazil's indigenous territories with the current government. It's not a trustworthy agency for us," said Nara Bare from the Coordinator of Indigenous Organizations of the Amazon River Basin.

As of Friday, there have been 22 suspected cases among indigenous people and 19 dismissed cases. There is one confirmed case in Amazon state.

The death of the 87-year-old indigenous woman in Santarem is not included in these numbers. The local secretariat said it was only counting the cases of indigenous people who live in remote villages. Those who live in cities are treated by the public health system.

As Brazilians try to adapt to social distancing measures to slow down the spread of the virus, criminal groups have intensified their activities in indigenous territories.

Illegal mining has increased in the Amazon during the pandemic. And just last week, indigenous leader Zezico Guajajara was shot dead in Arariboia, a region of interest to loggers. The indigenous territory registered a similar crime with another leader last November.

"The criminal networks will notice the risk of being held accountable is decreasing, and we will definitely see criminal activity intensify in and around indigenous territories," said Danicley Aguilar, of Greenpeace's Amazon campaign. Aguilar wants to shed light on the decision of Brazil's Environment Institute to pare back its efforts to fight environmental crimes during the pandemic, which comes amid a deficit of 2,000 civil servants and other budget cuts.