Bundesliga leaders Borussia Dortmund travel east to face RB Leipzig on Saturday. It will be just the sixth clash between the clubs but already a strong antipathy has developed. DW takes a look at the how, when and why. 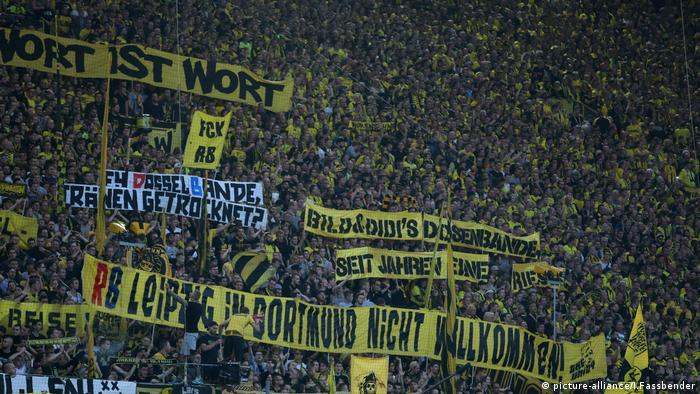 Traditionally, footballing rivalries revolve around some combination of proximity, history and politics. But with their stadiums more than 400 kilometers apart, and their first meeting coming as recently as 2016, the ill feeling between Borussia Dortmund and RB Leipzig is grounded largely in one thing: ideology.

As with previous games at the Red Bull Arena, many of Dortmund's largest fan groups, including the three vocal ultra groups, will boycott Saturday's match in protest at the ownership structure of the energy drink-backed club from Germany's east, with many planning on watching the game in Dortmund instead.

"Even if we have to do without supporting our team again: RB Leipzig against Borussia Dortmund is not our game," read a statement from the official BVB Fanabteilung (fan department) as they confirmed no club-run buses would travel across the country to Leipzig for Saturday's late game. "We want to keep football as the people's sport!"

And the clubs couldn't resist a dig at each other as game day approached, with Dortmund using the social media movement #10YearChallenge to point out that RB Leipzig didn't even exist until mid 2009, before the Red Bulls responded.

But how did we arrive at this stage? DW takes a look at the previous five meetings of the clubs to find out.

Newly-promoted Leipzig's ascent to the top flight was deeply controversial. Fans across Germany are opposed to their perceived circumvention of the country's 50+1 rule, designed to keep clubs in the hands of the fans, and uncomfortable about their ownership by Austrian drinks manufacturer Red Bull and transfer links to its various franchised clubs.

Many prominent German fan scenes continue to be vocally opposed to RB Leipzig, with hardcore Bayern Munich and Cologne supporters also among those who still refuse to attend away fixtures in Leipzig.

Dortmund's leading fan groups boycotted RB's first home game in the top flight, attending a reserve team fixture in Dortmund instead. All 4,300 tickets in the away end were snapped up in less than an hour anyway but those who did make the trip were to be disappointed as Naby Keita turned in Oliver Burke's low cross in the last minute of normal time to secure the club's first Bundesliga win.

That win proved to be the spur for an exceptional first half-season for Leipzig, who wouldn't lose a game until December. They visited Dortmund for the first time having bounced back from a defeat to Bayern Munich before Christmas with two wins, to leave them hot on the champions' tail. Pierre-Emerick Aubameyang's first half header separated the sides but the story was very much off the pitch.

RB Leipzig fans were bombarded with missiles including cans and stones on their way to the ground with 28 people later charged with offences. Fans on Dortmund's famous Südtribune (South stand) unfurled an enormous amount of banners, four percent of which were later deemed to contain illegal content, according to police. A German FA (DFB) investigation, which was able to focus only on events in the stadium, led to the closure of the Südtribune for one league game and a €100,000 fine.

A thousands-strong anti-RB Leipzig march through the streets of Dortmund passed off largely peacefully, though the feelings of the home fans were impossible to mis-interpret.

On the pitch, things weren't quite so calm, with Aubameyang opening the scoring after four minutes only for the visitors to roar in to a 3-1 lead just after the break thanks to efforts from Marcel Sabitzer, Yusuf Poulsen and a Jean-Kevin Augustin penalty. Aubameyang pulled one back from the spot with 26 minutes remaining but it wasn't enough. It was BVB's first loss after a blistering start saw them take 19 points from 21 under Peter Bosz. It was to prove the beginning of the end for the Dutch coach, who failed to win another league game before his dismissal in December.

By this stage, Dortmund had steadied the ship somewhat under interim coach Peter Stöger while Leipzig were suffering from second season syndrome.

Again, most major Dortmund fan groups stayed away but this one was a less frenetic affair, with neither side able to break a deadlock established when Augustin and Marco Reus both notched within nine first half minutes of each other. On loan Dortmund striker Michy Batshuayi missed a sitter that would've given his side their first win in Leipzig and the sides ended the campaign in disappointing fashion, the Red Bulls finishing sixth and BVB sneaking in to fourth.

Both sides had new bosses by the time they met on matchday 1 of the current campaign. Ralf Rangnick was keeping the RB Leipzig hotseat warm for Julian Nagelsmann while Lucien Favre was the latest man tasked with returning the Black and Yellows back to the summit.

As had now become customary, the Südtribune were once again keen to draw the distinction between their traditional values and Leipzig's franchise model, with a banner reading: “Here we go again! Everyone gets their chance, but for RB Leipzig: zero tolerance!” unveiled at the front of the stand.

Favre got off to a shocking start, with Augustin again making his mark, this time after less than a minute. But a Mahmoud Dahoud strike, a Sabitzer own goal, a debut bicycle kick from Axel Witsel and a late Reus effort secured a margin of victory that flattered the hosts.

It kick-started a brilliant Hinrunde (first half of the season) from Dortmund. Favre, and BVB's fans both in the Red Bull Arena and back in Dortmund, will be hoping Saturday will mark their first away win against a club whose right to exist many still deny and start the run-in to a first Bundesliga title since 2012.

Bundesliga: Bayern Munich with early chance to turn up heat on Dortmund

The Bundesliga returns from its winter break on Friday night, with the champions looking to heap pressure on the contenders. Bayern Munich stumbled in the first half of 2018-19, but their coach sees plenty to build on. (17.01.2019)