The build up to RB Leipzig's home Bundesliga debut was dominated by off-the-pitch concerns but, on Saturday, the fans joined the players in proving they belong. Of course, not everyone agrees, writes DW's Matt Pearson. 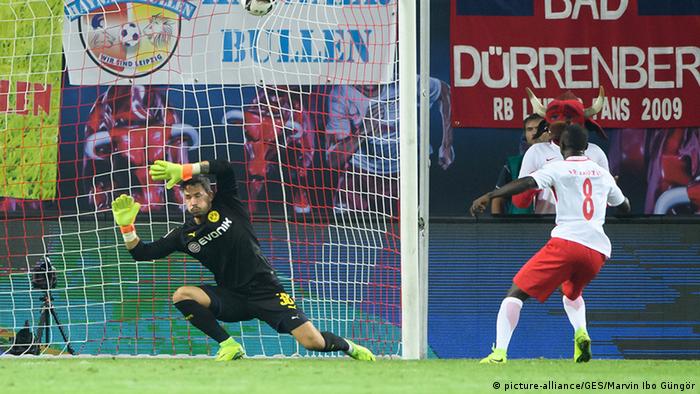 It's a more controversial statement than it first sounds but RB Leipzig are, almost indisputably now, a genuine Bundesliga force.

In truth, their rise through the divisions has long felt like a prelude to moments like Saturday night but a stunning and thoroughly deserved 1-0 win over title contenders Borussia Dortmund cements their status, though there will still be those who question the validity of it all.

Ahead of their first home game in the top flight, the home fans who sought shade as they strolled towards the Red Bull Arena on a sweltering September day certainly felt as if they belonged at the top table.

But for some of their counterparts in yellow and black the name of the stadium itself is a strikingly obvious reminder that the east German club really don't belong at all.

For many Dortmund fans, and indeed football fans across Germany, the seven-year-old club owned by the energy-drink manufacturer Red Bull stand as a shining example of everything the Bundesliga shouldn't be.

There was further confirmation of that sentiment in the absence of Südtribüne, a group of diehard Dortmund fans who travel in numbers to away fixtures, on Saturday. The fan group announced they wouldn't be travelling the 415 kilometers to this one last month, dropping a fly in the Red Bull ointment.

"It is scandalous that a purely commercial marketing branch of an Austrian drinks manufacturer can actually compete in Germany's top flight. This goes against all sporting and emotional values," their statement read. Rather than taking their seats on Saturday, the Südtribüne followed the dramatic defeat on the radio.

Their absence was felt. There were clusters of empty seats dotted around the away end despite Dortmund selling their 4,300 tickets in less than an hour. The travelling fans were comprehensively out sung by an excited home crowd, who drowned out the jeers and cheers of those in yellow with pounding drumbeats and full-throated chants.

The hosts responded on the pitch, matching their more illustrious opponents blow-for-blow in the first half, and the fans cranked the volume up further still when their team began to assert their authority on the league's second best side in the second period.

Last-minute winners never fail to produce an ear-splitting roar but the emotional and vocal release of Naby Keita's close range finish was the sound of a club arriving in the big time. A region starved of top-flight football for too long finally had its moment in the sun.

Although the away fans didn't seem to display any collective antipathy towards their opponents, with plenty of yellow shirts tucked among the white in the stands that run along each flank, individual feelings weren't all so conciliatory.

"We came here to support our team but we don't like this club," Dortmund fan Peter Herz, who travelled to the game with friends, said. "This is all fake here, it is not what German football is - it is more than business and money."

But Leipzig fans are keen to point out theirs isn't the first club in the world – or even in Germany – to be the beneficiaries of a sugar daddy (even if their case is more literal than most).

For Claudia Schulz, dressed, like her family, in this season's RB Leipzig shirt, the presence of a side from the former East Germany and the way in which the club have assembled a young and exciting side that were able to play Dortmund off the park at times, has entirely negated any concerns about their place in German football.

"For a long time we have not had Bundesliga football here and the people want it, you can see that here today" she said. "I think maybe Dortmund and Bayern have been at the top for too long. Yes, we have money but I think we don't care so much because we have a good and a young team. It's very exciting for Leipzig.”

There's little escaping Leipzig's means as a factor in their success. It's impossible to imagine fellow promoted side Freiburg being able to call on a 15-million-euro substitute to provide the winner for another 15-million- euro substitute. But that's exactly what happened on Saturday when Oliver Burke teed up Keita (signed from Leipzig's sister club RB Salzburg).

Schulz argues it's been difficult to imagine players like Burke signing for anyone but Germany's football superpowers for a long time. She says Leipzig are here to "shake things up."

They certainly did that on Saturday and Dortmund, and the rest of the Bundesliga, can expect to see a whole lot more of the cash-assisted newcomers.

After an unwelcome international break, the Bundesliga struggled on its second return. From slow starts to unexpected hat-tricks, here are some of the Bundesliga talking points from matchday two. (10.09.2016)