Bonds deepen between UAE and India as pandemic continues | Middle East| News and analysis of events in the Arab world | DW | 02.05.2021

Bonds deepen between UAE and India as pandemic continues

When the United Arab Emirates suspended flights from India, some members of the UAE's largest foreign population were stranded amid the second wave. The UAE government and private initiatives have pledged their support. 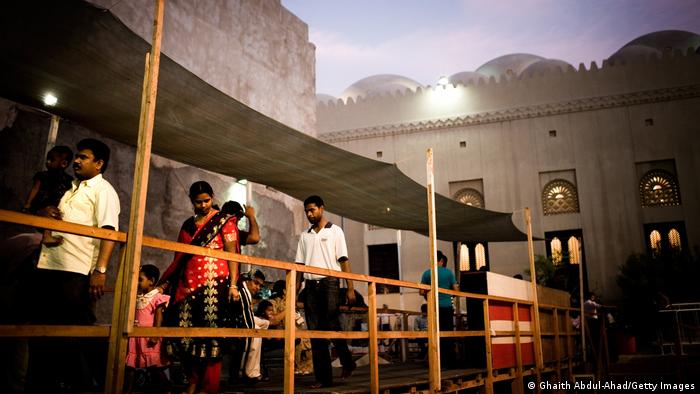 Because of the surge in COVID-19 infections in India, the United Arab Emirates has extended its suspension of incoming flights from India until May 15. In a phone call earlier this week, UAE Foreign Minister Sheikh Abdullah bin Zayed Al Nahyan told his counterpart in India, Subrahmanyam Jaishankar, that his government offered its full support and solidarity. The UAE has shipped oxygen concentrators to India.

The Indian expatriate community is the UAE's largest foreign-born population, making up about 3.42 million people, or about 30% of the country's total population, according to the International Migrant Stock 2019 report released by the Population Division of the UN Department of Economic and Social Affairs. According to the World Bank, only about 10% of the 10 million people in the UAE are Emirati citizens. Citizens are excluded from the flight ban from India, just like owners of private jets, diplomatic passport holders and official delegations. 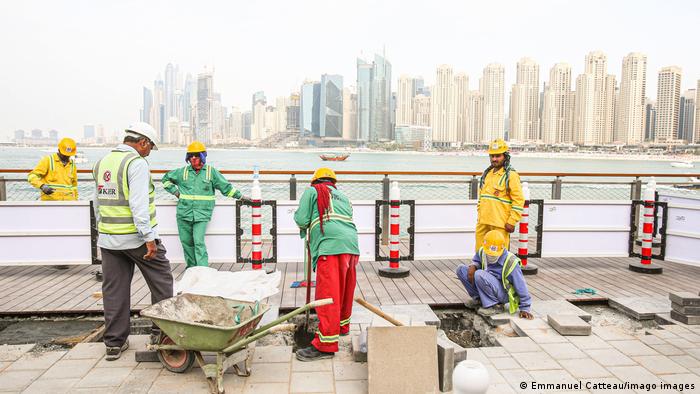 Migrant workers are often employed in the construction industry in Dubai

"To be honest, we kind of expected first the ban and then the extension, since other countries have capped connections before," Lakshmi S., a 33-year-old health worker from Andhra Pradesh who moved to Dubai five years ago, told DW by phone. Lakshmi asked that her last name not be published — "out of fear," she said. Her husband works in Dubai's construction industry, but he has been told that he will probably lose his job as of next month.

The majority of workers are bound by the kafala system, which ties the visas of migrants to sponsorship by their employers. Despite an update in 2017 that led to certain labor rights for domestic workers, the law falls short of international standards and offers fewer protections than are extended to Emiratis.

"The kafala system is at the core of what is powering the unjust situation of migrant workers, and abuses are systemic," Hiba Zayadin, Gulf researcher at Human Rights Watch, told DW. "Since the start of the pandemic, migrant workers have been forced to go back to their home countries, often without claiming the unpaid wages they were due and that they were following up on with the labor courts."

In October, Amnesty International warned the countries of the Gulf Cooperation Council (GCC) have "used the COVID-19 pandemic as a pretext to continue preexisting patterns of suppressing the right to freedom of expression."

It's safe to say that the situation of job seekers hasn't improved since the beginning of the pandemic. "Those who are unable to find jobs, or who are "returned" to manpower agencies during their trial period, face extreme precarity. The dependency on domestic workers, especially live-in, is on the rise," Meenu Sethi, a researcher at the advocacy organization Migrants Rights, concluded in a recent report.

On top of the deteriorating living and working conditions, the flight ban has meant that Indians who went home to visit or support their friends and families are now stranded there as the coronavirus spreads rapidly.

Airlines haven't reported how many passengers had been affected, but there are dozens of flights scheduled daily under normal conditions, with all major carriers flying the four-hour route. Airlines are offering to swap tickets for new dates and promising a fast resume of flights on their websites and social media accounts.

Dr. Preeti Ranjalkar is one of the many Indians who cannot return to the UAE after she visited her daughter in Mangalore. "I have been on vacation since April 2 and was scheduled to fly back on 30 April, but now I am stuck. I am a gynecologist and I have given appointments to my patients starting 1 May," Ranjalkar told the UAE's Khaleej Times.

Despite their difficult personal situations, many members of the Indian community in Dubai have started private initiatives to support the country. This week, 52-year-old Anuradha K. started a Facebook initiative to collect money to send oxygen concentrators to India. "I was upset seeing the news and it was just a heartfelt cry to reach out to people on Facebook," Anuradha, who also asked that her last name not be used, told DW.

So far, support has been overwhelming. "We have now almost 10 solar oxygen concentrators confirmed," said K. who hails from Hyderabad and moved to the UAE 25 years ago. Instead of donating to India's state fund, she wants to send the oxygen to a Rotary Club that is run by her friend back home. She hopes that the shipping won't be too expensive as she lost her job as head of finance because of the pandemic last year. 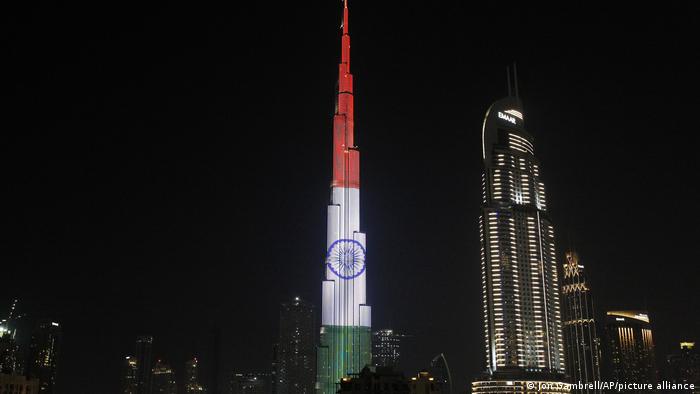 The Burj Khalifa, the world's tallest building, displayed the Indian flag in solidarity this week. This is a 2018 file photo

Two symbolic displays of solidarity took place in Dubai this week: The world's largest building, the Burj Khalifa, was lit with the colors of India's flag to showcase support, and traffic billboards were turned into "#Stay_Strong_India" support signs.

Correction May 2, 2021: A previous version of this article misspelled the name of Meenu Sethi. This has now been corrected. We apologize for the error.

As India's healthcare system crumbles under the weight of the deadly second COVID wave, people have been taking to social media to amplify calls for help.

The country's healthcare system has been overwhelmed by a deadly coronavirus infection wave. DW is broadcasting a news special on the crisis in India right now.

The United Arab Emirates has scrapped laws defending "honor" killings, in a major reform of the country's criminal law. Alcohol restrictions have been eased and a ban on unmarried couples cohabiting has been lifted.