Countries in South Asia are watching out for a potentially more infectious coronavirus variant crossing the border from India. COVID-19 case numbers are currently rising in several countries. 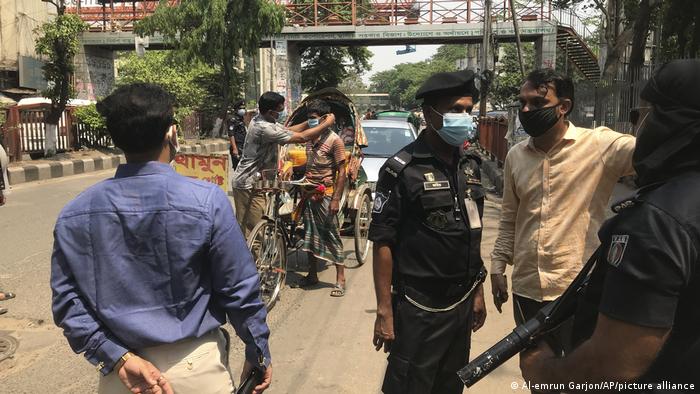 As India's second coronavirus wave surges across the country, neighbors such as Nepal, Bangladesh and Pakistan are also reporting a recent increase in new cases.

This has prompted authorities in these countries to close borders and restrict travel. However, some of these borders are porous, with many people crossing back and forth every day.

The variant, called B.1.617 and described as a "super mutation," was initially detected in India and has now been found in at least 17 countries, according to the World Health Organization (WHO).

The WHO has said preliminary modeling based on genetic sequencing showed that B.1.617 could be more transmissible.

"This virus respects no national borders and needs no passport. The double mutant shows that it is more infectious than other circulating variants in India, suggesting potential increased transmissibility," T Jacob John, an Indian virologist, told DW.

In February, Nepal's COVID infection rate was hovering around a manageable 150 to 200 new cases daily.

Over the past two weeks, Nepal has been reporting thousands of new COVID cases every day, which coincides with India's current surge.

"It is definitely scary, and we are a small country. Right now, we are seeing almost 4,000 to 5,000 cases across the country, and many of the cases are in the Lumbini province [which shares a border with India]," Ranjeet Baral, a Nepali physician, told DW from Kathmandu.

An estimated 6 million Nepali people live and work in India, and, given the porous nature of the borders, people cross frequently.

The border was closed for some time during India's lockdown last year, but it has since been reopened.

Physicians in Nepal say that, though mortality rates have been relatively low so far, COVID-19 infection rates have been high among youth, who have a higher chance of spreading the virus.

"Our health infrastructure has been stretched, and we are running short on beds. Epidemiologists have detected the Indian variant and we could be facing a potential crisis," Baral said.

Similarly, sparks from India's pandemic wildfire seem to have landed in Bangladesh to the east. Authorities there have restricted the movement of people by shutting down borders for two weeks.

Bangladesh's National Technical Advisory Committee on COVID-19 also recommended that the borders not reopen until the situation in India improves.

The committee emphasized that the government should take strict measures to guard against the "Indian variant."

"The higher authorities have decided to close the borders for two weeks. The land routes with India will be shut from April 26," Bangladesh's home minister, Asaduzzamman Khan Kamal, recently told reporters in Dhaka.

From March 15, when COVID-19 infections in Bangladesh began an upward trend, to April 28, new cases in the country jumped to more than 194,446. Currently, Bangladesh's total caseload stands at over 757,000.

To try to control the current surge, the country is conducting nearly 35,000 tests every day.

Gautam Menon, a distinguished Indian biologist, told DW that, given the amount of travel between India and its neighbors, it was "only a matter of time" before a more transmissible variant prevalent in India would cross borders.

"Border closures, such as Bangladesh has done recently, would help in the short term and are advisable," Menon said.

To the west, cases have also been climbing in Pakistan since early March, coinciding with the outbreak of the second surge in India.

It is still unknown if the Indian variant has been reported in any of the new infections. Travel from India to Pakistan has been banned since April 19.

"Viruses will cross borders when people cross borders. I am not surprised that we are seeing a surge in our neighborhood," Shahid Jameel, a virologist, told DW.

Scientists were 'taken by surprise'

India's official scientific adviser, K Vijay Raghavan, admitted for the first time that the ferocity of the second wave had taken everyone, including the scientific community, by surprise. He added that the emergence of new variants was certainly a factor.

Lancelot Pinto: India letting its guard down 'was a mistake'

"There is evidence for faster transmitting variants contributing to the surge," Raghavan told the Indian Express newspaper in an interview.

Raghavan added that B.1.617 was associated with the outbreaks in the western Maharashtra state and transmissibility increased after the double mutant variant appeared.

Epidemiologists are concerned that the spread of the pandemic has created conditions in which SARS-CoV-2 has been able to mutate and develop more virulent, potentially vaccine-resistant variants.

It is for this reason that a group of more than 200 scientists and medical researchers recently asked Indian Prime Minister Narendra Modi to release data on the patterns and severity of the COVID-19 infections.

There are concerns that the government could be withholding information on infection rates that could contribute to knowing more about how the pandemic is evolving.

India's government has been supplying countries around the world with free coronavirus vaccine doses. However, there is some worry that this "vaccine diplomacy" will come at a cost to vulnerable Indians.

The B.1.617 variant raised alarms after it was identified as a double mutant. But the fact that both mutations occur together does not necessarily mean that this variant is also twice as infectious or dangerous.

Why has Pakistan not realized its economic and political potential? 13.08.2022