Security forces conducted an operation to clear a blockade of a major fuel plant that left at least three people dead. Bolivia is suffering from food and gasoline shortages as a political crisis deepens. 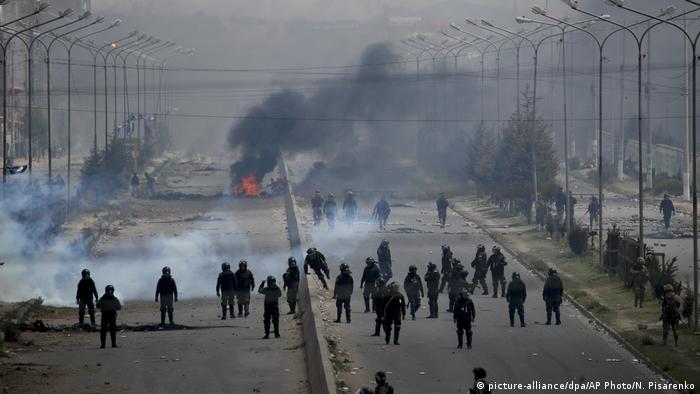 At least three supporters of unseated Bolivian President Evo Morales have been killed in clashes between protesters and security forces near a major fuel plant.

The fatalities occurred in El Alto, where security forces conducted an operation backed by armored carriers and helicopters to open access to the Senkata gas plant that protesters have blockaded. Eight people were also injured. The exact circumstances of the deaths and injuries hadn't been determined.

Public defender Nadia Cruz said the deaths were caused by gunshots and called upon the interim government to withdraw troops from policing operations to quell violence.

Meanwhile, the military announced in a statement that the operation to move the fuel from El Alto to the capital of La Paz was peaceful.

Weeks of sometimes violent protests have led to shortages of food and gasoline across the South American country as supporters of Morales blockade key transport routes.

According to the Inter-American Human Rights Commission, 23 people have been killed and more than 700 injured since riots erupted in Bolivia following a disputed October 20 election.

Morales, who resigned on November 10 and fled to Mexico after coming under pressure from opposition protesters and the military, has rallied mostly indigenous supporters against what he called a right-wing coup against him.

Interim President Jeanine Anez says she wants to hold new elections, but the process has been stalled by difficult dealing making with Congress, a body controlled by Morales' Movement Toward Socialism party.

Morales has said he wants to return from Mexico and will not run in a new election, but the interim government has threatened to prosecute him for allegations of electoral fraud and corruption.