Jeanine Anez has called for a fresh vote to be held as former leader Evo Morales promised to return, repeating allegations of a coup. Protesters from both sides have taken to the streets once more.

Anez, who declared herself president on Tuesday after Morales fled to Mexico, tweeted Wednesday: "God bless you and allow us to be free and to hold transparent elections soon."

Previously, Anez was the second vice president of the Senate and thus assumed control. The Bolivian constitution states an interim president has 90 days in which to arrange an election.

Morales, who decried the United States' recognition of Bolivia's new government, reiterated his determination to return to the country he ruled for 14 years by saying he was willing to go back "as soon as possible," while his supporters clashed with police in protests against his self-appointed successor.

He continued by telling reporters in Mexico City: "If my people ask, we're ready to go back. We'll return sooner or later ... to pacify Bolivia."

Morales' supporters and police clashed as authorities used tear gas to disperse demonstrators. In response, angry protesters ripped off corrugated sheets of metal and planks of wood from building sites, using the material as weapons. Many had flooded the streets of La Paz and the neighboring city of El Alto, brandishing indigenous flags and chanting "Now, civil war!'' 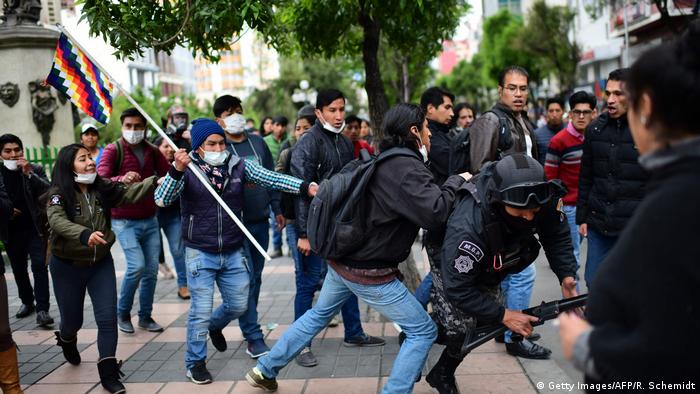 A riot policeman is bundled over amid violent clashes. Citizens were out in force to show their support of ex-President Evo Morales, waving indigenous flags and demanding his reinstatement

In Congress, Morales' loyalists were constructing a challenge to Anez's legitimacy by attempting to conduct new sessions that would undermine her claims to the presidency. The sessions were not recognized by Anez's faction, though, as they said the meetings were invalid.

However, some legal specialists contested her validity for the role, citing legal technicalities meant Congress should convene.

The state of flux in the Latin American country stems from October elections, in which Morales claimed outright victory against his challenger Carlos Mesa, amid accusations of fraud.

This led to protests, from both sides of the political spectrum, that ultimately provoked his resignation last week. The nation's first indigenous president subsequently fled to Mexico, where he arrived with just one suitcase, according to Mexican Foreign Ministry official Maximiliano Reyes.

Morales vowed a fresh vote and reformed electoral body after the OAS uncovered grave "manipulations." But a call from the military for him to resign has upped pressure on the leftist leader. (10.11.2019)