Former Bolivian President Evo Morales arrived in Mexico after being granted asylum there. Stepping off the plane Morales credited the Mexican president with saving his life.

Morales was unequivocal as he condemned what he called "the sneakiest, most nefarious coup in history" after deputy Senate speaker Jeanine Anez proclaimed herself Bolivia's new interim president.

Grateful to Mexico, will continue fighting

Earlier on Tuesday, the former president was in better spirits as stepped off the plane smiling and waving, wearing a light blue short-sleeved shirt before shaking Foreign Minister Marcelo Ebrard's hand. 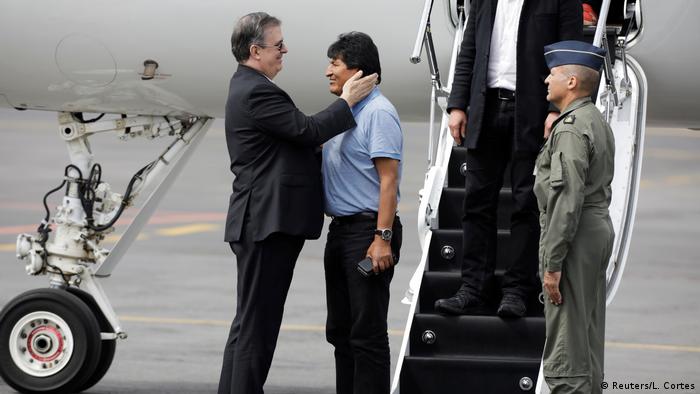 He went on to say that the only crimes he was guilty of were being indigenous and "anti-imperialist." His critics, including election observers from the Organization of American States (OAS), alleged that his election victory was rigged.

Ebrard documented the former president's journey in a series of tweets, announcing his arrival on Mexican soil as well as a photograph of Morales during his flight on a Mexican air force jet.

"It pains me to leave the country for political reasons, but I will always be watching," Morales, who has led Bolivia for the past 14 years, tweeted. "I will be back soon with more strength and energy."

The plane flew south for a stop in Paraguay after departing on Monday evening, before flying north to Mexico on Tuesday.

Morales — Bolivia's first indigenous president —  quit his post on Sunday after an election on October 20 in which he sought an unprecedented fourth term. A disputed win for the 59-year-old sparked civil unrest, and he came under pressure from the military to quit the post.

Ebrard said Morales' "life and physical integrity" were at risk in Bolivia.

The world has reacted with a variety of perspectives on the developments of the last 24 hours, with the Organization of American States calling an emergency meeting Tuesday afternoon to discuss the situation.

However, the US State Department has said the situation in Bolivia was not a coup. US President Donald Trump said that the events in Bolivia sent a strong signal to other Latin American countries, such as Venezuela and Nicaragua, and that "democracy and the will of the people will always prevail."