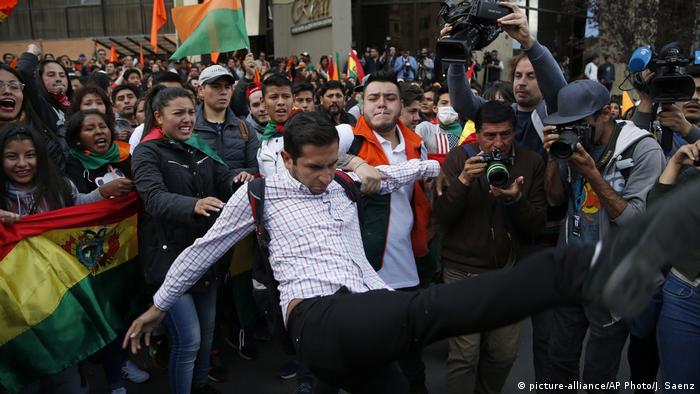 Bolivian President Evo Morales was set to win the presidential election, according to electoral authorities on Monday, prompting a swift rejection from the opposition and widespread violence.

According to official results, Morales will likely avoid a runoff election by surpassing his closest rival by more than 10 percentage points. However, opposition groups and international observers grew suspicious of the results when the electoral authority abruptly stopped releasing counts.

The last numbers released before the halt showed Morales beating the eight other candidates but falling short of the count required to avoid a runoff election. Official results put him at 45.3%, compared with 38.2% for the closest competitor, former President Carlos Mesa.

However, authorities later announced Morales was close to winning an outright victory, allowing him to avoid a runoff election against a unified opposition.

"The people again imposed their will," Morales said.

The results were swiftly condemned by opposition groups and international observers.

"We are not going to recognize those results that are part of a shameful, consummated fraud, that is putting Bolivian society in a situation of unnecessary tension," said Mesa.

The US State Department accused Bolivian authorities of trying to subvert the vote, and an observer mission from the Organization of American States expressed concerns about the counting process.

"The OAS Mission expresses its deep concern and surprise at the drastic and hard-to-explain change in the trend of the preliminary results revealed after the closing of the polls," it said, calling on electoral officials "to firmly defend the will of the Bolivian citizenry."

The foreign ministries of Argentina, Brazil and Colombia also expressed their concerns.

Mesa, who led the country between 2001-2005, accused Morales of colluding with the Supreme Electoral Tribunal (TSE) to tweak delayed results and avoid a runoff.

Protesters set fire to regional offices of the electoral body in the southern cities of Sucre and Potosi late Monday, and a crowd burned ballots from Sunday's election in Tarija.

Rioting was reported in at least six of Bolivia's nine regions. In La Paz, police attempted to disperse protesters with tear gas.

Supporters of Morales clashed with his opponents in a number of places across the country, including the capital of La Paz.

Bolivian Interior Minister Carlos Romero blamed the opposition for causing unrest and said, "They have to take care of the violence they're generating."

In office for nearly 14 years, Morales is South America's longest-serving president. If his victory is confirmed, Morales' controversial fourth term as president comes after he overturned Bolivia's two-term limit.

In a 2016 referendum, Bolivian voters rejected Morales' proposal to scrap term limits. However, in 2018, the country's Supreme Court — seen by critics as being stacked with Morales loyalists — then overturned the decision and ruled that Morales had the right to run again.

President Evo Morales is leading in early returns from the presidential election first round, but appears headed for a runoff. Morales, South America's longest-serving president, is seeking a controversial fourth term. (21.10.2019)