Thousands of angry Bolivians have taken to the streets across the country two days after the decision. The court's ruling overturned a 2016 referendum spurred by Morales' attempts to amend the constitution. 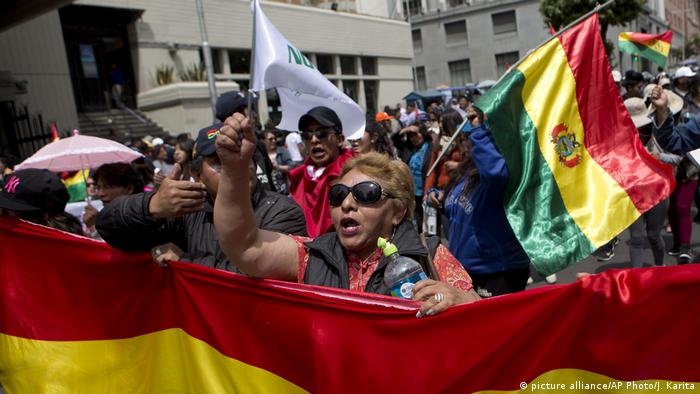 Thousands of angry Bolivians took to the streets Thursday to protest a decision by the country's Supreme Electoral Court allowing long-serving President Evo Morales to stand for a fourth term in office.

Although Bolivia's constitution bars him from running in next October's election and a 2016 national referendum determined he should not be allowed to change the constitution to do so, the court, nevertheless, ruled in his favor on Tuesday.

In the capital, La Paz, as well as major cities, including Santa Cruz and Cochabamba, angry protesters blocked streets and disrupted public transportation, chanting and waving banners emblazoned with the words "Bolivia said NO," in reference to the 2016 referendum.

Protesters had called for a general strike, yet banks and other businesses remained open. Though the government has sought to downplay the protests, other institutions, such as the Catholic Church, which is very influential in the South American country, voiced support for the protesters, saying the court's decision "called into doubt the very basis of democracy, leaving Bolivians with an uncertain future."

'What remains now is to resist'

La Paz Mayor Luis Revilla, who opposes Morales, said, "What remains now is to resist this decision, to turn to the streets in protest, to prevent this decision from being realized." Former President Carlos Mesa, Morales' main opponent in next year's election, called for the opposition to wage "a democratic battle" against the court's ruling.

Senator Arturo Murillo of the opposition Unidad Nacional railed against the court, saying: "The will of the voters is above the constitution and international norms. The Electoral Court has no respect for the result of the referendum."

The Tuesday ruling upheld a Constitutional Court ruling from last year that cited the American Convention on Human Rights, saying there should be no restriction on elections. Constitutional scholars have questioned whether an international treaty can take precedence over the country's constitution.

Morales, who has been in office since 2006, has claimed that not allowing him to run in the October 2019 presidential election would be a violation of his human rights. Already the longest-serving leader in South America, Tuesday's decision could allow him to remain in office until 2025, and perhaps beyond.