Bolivian President Evo Morales has agreed to run for re-election in 2019, defying a referendum that confirmed the legal limit of two consecutive terms. Party officials have suggested several ways to bypass the rule. 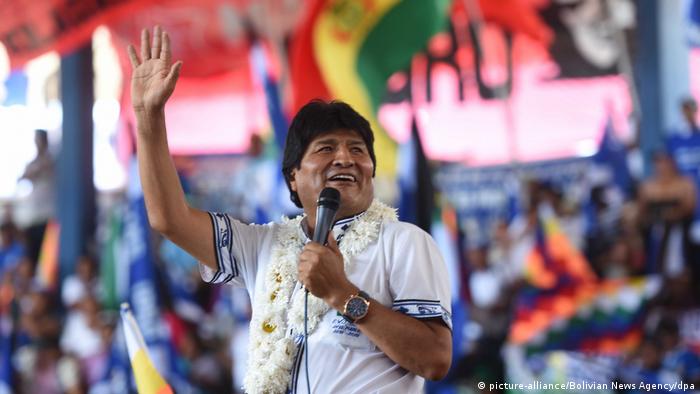 The ruling Movement for Socialism party backed Morales unanimously on Saturday, following a party congress in the eastern Bolivian city of Montero.

The president welcomed the decision, noting that his party had already defeated the right "so many times."

"If the people decide it, Evo will continue," he added.

Morales is currently in his third term. While the South American country has a two-term limit for its presidents, Morales' first term was cut short by a constitutional reform in 2009 which allowed him to run twice more.

Earlier this year, the government announced a bid to change the constitution again so as to allow Morales another re-election.

However, the bid was narrowly defeated in a February referendum.

The 57-year-old president's reputation was also damaged last year when reports surfaced about his relationship with a much younger women. The 29-year-old Gabriela Zapata worked as an executive for a Chinese company that won a large government contract for a railway project. Morales admitted to the relationship, but denied ever using his post to help the firm do business in Bolivia.

During the party congress on Saturday, the ruling party pitched four potential ways to allow Morales to run despite the constitutional limits. They include a petition drive to change the regulations, an extension of mandate, asking the Constitutional Tribunal for a reinterpretation of the rules, or having Morales resign six months before the 2019 elections so he would be able to run again.

In response, the opposition said that any such attempts would be unconstitutional, noting the referendum results.

Morales first won power in 2005, and another successful presidential bid would keep him in office until early 2025.