A recount is underway in Bolivia's controversial presidential election, with more protests expected. The EU criticized the "unexpected interruption" of the vote count and called on Bolivia to uphold democratic values. 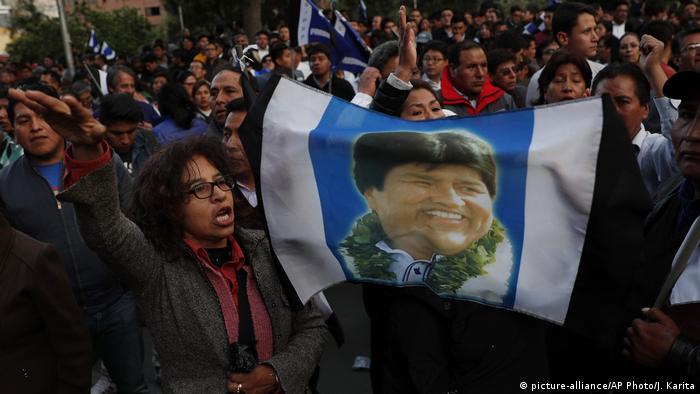 The EU expressed concern on Tuesday over irregularities in Bolivia's presidential election and the violence and unrest it has sparked. Protests are expected, even as official results are not due for several days.

Morales, the country's first indigenous president and its longest-serving leader, is seeking a fourth term in office.

Bolivia's top electoral authority announced on Sunday night that Morales had won with 45.3% of the votes, with his closest rival, former President Carlos Mesa, coming in second with 38.2%. Morales fell short of clearing a 10-percentage-point difference with Mesa to avoid a runoff.

The discrepancy and delay in results led to rioting and protests by opposition voters and activists, with several clashes taking place between them and Morales' supporters.

The Bolivian government asked the Organization of American States (OAS) to conduct an audit of the vote count, saying he had “nothing to hide.”

Foreign Minister Diego Pary said the government would accept the final result of the election. "We're the ones who are most interested in counting the votes of all Bolivians," Pary told a news conference in the country's capital, La Paz.

According to Reuters news agency, on Tuesday, the OAS accepted the invitation by the Bolivian government.

"The unexpected interruption of the electronic vote counting after the first round of the general elections in Bolivia has sparked serious concerns that need to be fully and swiftly addressed," EU Foreign Affairs spokeswoman Maja Kocijancic said in a statement.

"Recent incidents need to be investigated and we furthermore call on all parties to refrain from violence," the statement read.

Kocijancic stressed that EU cooperation on economic and social development was founded on "a shared commitment to democratic values and principles that should be upheld at all times."

Bolivia's opposition has accused government officials of aiding Morales in avoiding a runoff battle by manipulating the election results.

Morales, on the other hand, has claimed an outright victory since late Sunday, when he told supporters that outstanding votes would count in his favor to clear the threshold.

"The people again imposed their will," Morales said.

It is uncertain whether an audit will be enough to calm the violent protests and strikes in Bolivia, with representatives of civil society organizations from Bolivia's six regions calling to extend a strike originally set for Tuesday in the country's largest city Santa Cruz.

Morales had faced growing dissatisfaction at home ahead of the vote and in recent years, with his candidacy in the 2019 presidential election being seen as controversial.

The Bolivian president lost a 2016 referendum where he sought to remove presidential terms and then refused to accept the results. Bolivia's top court, which critics say is allied with the president, ruled that term limits would violate Morales' political rights as a citizen.

Morales and his current rival also have a history. Former president Mesa stepped down in 2005 amid an outbreak of demonstrations that were led by Morales, who was then leader of a coca growers union.

The struggle against Mesa in 2005 gave him the national platform to launch a movement that would bring him to office that year.

The ICJ has ruled in a century-old debate between two South American neighbors over one controversial coastline — and the ruling is not to Bolivia's liking. Chile and Bolivia have butted heads over sea access since 1904. (01.10.2018)