The police and military used live fire against supporters of former President Evo Morales. The violence deepens unrest and poses a heightened challenge to the interim government. 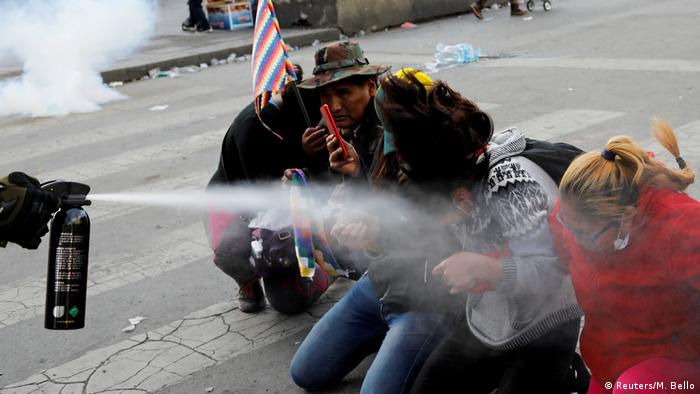 Five supporters of former Bolivian President Evo Morales were killed in clashes between protesters and security forces in central Bolivia on Friday.

The violence, which also left at least 75 injured, escalates unrest facing a four-day-old interim government whose opponents accuse it of carrying out a foreign-backed, right-wing coup to topple the country's first indigenous leader.

Thousands of mostly indigenous protesters had gathered peacefully in Sacaba, but clashes broke out when they attempted to cross a military checkpoint near the city of Cochabamba, the country's fourth-largest city.

Witnesses reported the police and military fired live ammunition at protesters, who had earlier been shot at with tear gas.

Morales, who resigned on Sunday and fled to Mexico after coming under pressure from opposition protesters and the military following a disputed October 20 election, wrote on Twitter that the interim government was massacring people and represented a "true dictatorship."

The Inter-American Commission for Human Rights condemned what it called a disproportionate use by security forces of live fire and tear gas against protesters.

The interim government didn't immediately comment on the deaths but said around 100 people had been arrested.

Angry supporters of Morales have staged their own protests since his ouster against the interim government.

Interim President Jeanine Anez, the vice president of the senate who took over on Tuesday after a spate of resignations, said Friday that Morales could return to Bolivia but would face justice over allegations of electoral fraud and corruption.

However, she has said Morales cannot be a candidate in new elections.

Morales claims he is still president because Congress did not officially accept his resignation.

The Constitutional Court has backed Anez's claim that she didn't need to be confirmed by Congress, a body controlled by Morales' Movement Toward Socialism party.

The interim government is seeking to strike a deal with the Movement for Socialism to hold new elections to end the crisis.

Morales' nearly 14 years in power were marked by an economic boom that addressed entrenched inequality and provided greater rights to indigenous communities in a country traditionally dominated by white-skinned descendants of Europeans.

However, many people became disenchanted with his bid to hold onto power for a fourth term.

In some Latin American countries, the struggle for power increasingly takes place in court. The instrumentalization of the judiciary is becoming a problem for the democracies of the region.