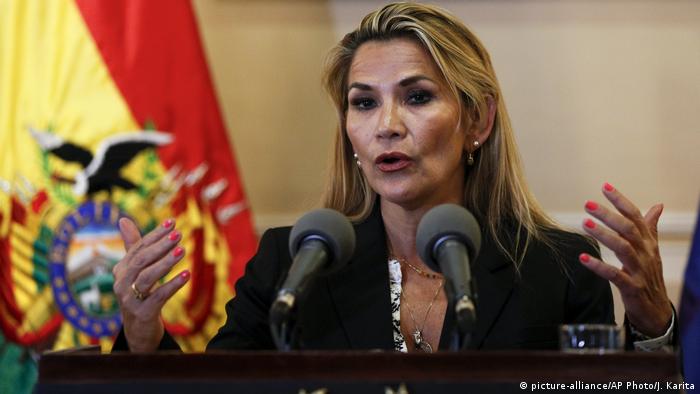 The decision by the conservative interim government upends Bolivian foreign policy following the resignation of Evo Morales, who had cultivated close ties with like-minded socialist governments in Latin America during his nearly 14 years in power.

Morales resigned on Sunday and fled to Mexico after coming under pressure from protesters and the military following a disputed October 20 election. The vote gave him a win but was marked by allegations of fraud and anger over his refusal to accept the results of a referendum preventing him from running for a fourth term.

Bolivia's first indigenous leader described his ouster as a foreign-backed, right-wing coup. Cuba and Venezuela have supported Morales' assertion he was toppled in a coup.

Interim Foreign Minister Karen Longaric said Friday that Venezuelan diplomats and Cuban officials were fomenting unrest against the interim government and ordered them to leave.

Cuba said 700 members of its medical mission to Bolivia would be removed but denied any role in pro-Morales protests after four doctors were arrested.

Cuba has a respected health service and has long sent tens of thousands of health workers to dozens of countries in exchange for foreign currency.

The expulsion of Cuban health workers comes after similar moves from governments in Brazil and Ecuador in recent months amid concerns the medical program was a cover for political meddling.

Angry supporters of Morales have staged their own protests since his ouster that have brought further unrest. Many protesters are from indigenous communities.

Interim President Jeanine Anez, the vice president of the senate who took over on Tuesday after a spate of resignations, said Friday that Morales could return to Bolivia but would face justice over allegations of electoral fraud and corruption.

However, she has said that Morales cannot be a candidate in new elections.

Morales claims he is still president because Congress did not officially accept his resignation.

The Constitutional Court has backed Anez's claim that she didn't need to be confirmed by Congress, a body controlled by Morales' Movement Toward Socialism party.

The interim government is seeking to strike a deal with the Movement Toward Socialism to hold new elections to end the crisis.

Bolivian authorities are under pressure to deliver a free and fair election after Evo Morales's government collapsed amid protests and claims of electoral fraud. Here's what you need to know about the political crisis. (11.11.2019)