The recent killing of a young Pakistani blogger, known for criticizing the nation's powerful military, has once again reignited the debate about the deteriorating freedom of expression in the country.

The stabbing to death of Muhammad Bilal Khan, a 22-year-old blogger, in Islamabad on Sunday night showed how fragile free speech in Pakistan is. Khan, who has over 16,000 followers on Twitter, 48,000 on his YouTube channel and 22,000 on Facebook, is known for criticizing the country's powerful military and the spy agency Inter Services Intelligence (ISI).

The blogger was also religiously inclined and held controversial views. "My son's only fault was that he spoke about the Prophet," the deceased's father Abdullah said.

But Khan's killing hours after posting a sarcastic tweet criticizing the appointment of General Faiz Hameed as the new ISI chief, has fueled speculation that the security establishment was behind his murder. Several Twitter users said that his criticism of the Pakistan army and the ISI led to his killing, although these allegations can't be verified.

Soon after his killing, #Justice4MuhammadBilalKhan started trending on social media.

Some rights activists believe the incident has created fear among those who are critical toward the nation's powerful military. Pakistan's army denies any role in curbing free speech or targeting those who criticize it. 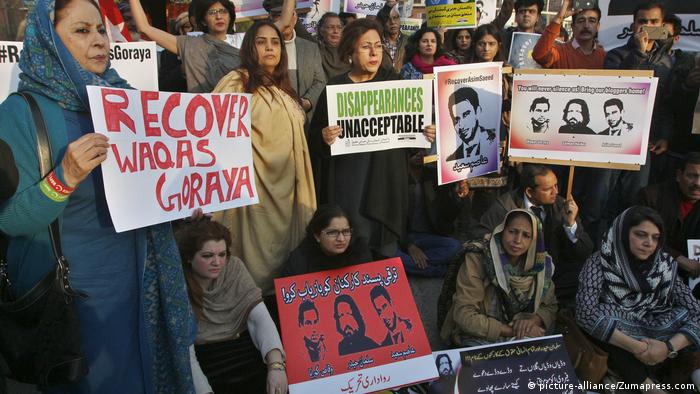 The country's non-governmental Human Rights Commission of Pakistan (HRCP) has called on the government to conduct an impartial inquiry into the killing and bring the perpetrators to justice. It also demanded that the authorities protect people regardless of their political and religious views.

HRCP's Asad Butt believes the space for free speech is shrinking in Pakistan. "The fact that he was murdered hours after a tweet criticizing the appointment of the ISI chief raises important questions. Who has the capacity to trace the blogger in such a quick span of time, get his mobile number and kill him in this way?"

Butt says the murder will lead to increased censorship in the country. "The media in the country have already been stifled. A little space was available on Twitter and other social media networks, where some media people and other independent-minded ones would express critical views," he pointed out. "Now, even they will be scared of expressing their views."

Pakistani journalists and media outlets say they are facing increasing restrictions, particularly when it comes to critical coverage of the security establishment.

Authorities are also targeting social media, asking Twitter to suspend accounts and submitting thousands of requests to Facebook to take down pages for a variety of reasons, ranging from criticism of the military to propagating hate and insulting Islam. The government says the curbs are aimed at monitoring extremist content.

In recent months, the security establishment has been accused of arresting dozens of workers of the Pashtun Tahafaz (Protection) Movement, or PTM, which has criticized the military's actions in the tribal regions in the northwestern province of Khyber Pakhtunkhwa and the western province of Baluchistan.

"We have been facing a media blackout since the very first day," Mohsin Dawar, a parliamentarian and founding member of the PTM, told the AP news agency last December. "The military now is enjoying unquestioned power in the country, and the PTM questioned their power."

PTM leader Said Alam Mahsud told DW that there is no freedom of expression in the country. "At least 27 activists of our movement have been arrested for merely criticizing the army on social media," he said. "We held massive rallies, but the media was instructed by the army's media wing not to cover our rallies, protests and public gatherings. The situation is so dire that the army instructs news channels as to what topics they should discuss during their talk shows and what to avoid."

Blame the army for everything?

Still, some in Pakistan say Bilal Khan's murder has nothing to do with the military. General Amjad Shoib, a defender of the Pakistani army policies, dismissed the allegations, saying: "There are many anti-army social media activists with millions of followers, but the army has never harmed them. What will it get out of the murder of an ordinary man whose following ran into a few thousands?"

The allegations are "completely baseless," Shoib said, criticizing the rights groups leveling allegations. "It's become a fashion to blame the army for everything."

To back his criticism, Shoib pointed to a previous incident, when an activist named Sabeen Mehmood was killed in Karachi and some sections immediately blamed the army for the murder. He noted that the "Islamic State" group later claimed responsibility for the killing.

Ahsan Raza, a Lahore-based political analyst, said the reason behind the blogger's killing is still unclear. "Most of Bilal Khan's tweets were filled with hate. He was the member of a religious group that is going through internal fragmentation. So there is a high possibility that he might have been killed because of internal rivalry."

The shutting down of a US-funded Pashto-language radio station has raised concern over Pakistani authorities clamping down on free speech and Western media outlets in the country. Shah Meer Baloch reports. (08.02.2018)

Pakistan has secured a multibillion-dollar bailout package from the IMF in a desperate attempt to get out of a crippling economic situation. But the road to strengthen the nation's finances is tough. (13.05.2019)