Blockchain in the energy transition: Hope or hype? | Environment | All topics from climate change to conservation | DW | 29.03.2018

The technology that made bitcoin possible could solve key challenges of a renewables-based energy system. The race is on to radically change how to we consume and generate power.

Blockchain is the energy sector's elusive Next Big Thing. Experts say the technology, more commonly associated with cryptocurrencies, could hold the key to transforming a traditional energy system based on centralized power plants to one powered by a multitude of volatile, diffusely scattered renewable installations.

"We have less and less conventional power plants to rely on, but more and more renewables, and we need means to integrate them into a system, so we are looking for new technologies," Ulrike Hörchens, spokesperson for German grid operator TenneT, told DW.

The idea is to attract "prosumers" — electricity customers who also produce their own renewable power and feed it back into the network — with free power in exchange for the contribution they can make to stabilizing the grid.

Currently, the German grid isn't up to the job of transporting electricity between the country's windswept north — dotted with turbines that produce more power than can be consumed locally — and its energy-hungry industrial south. 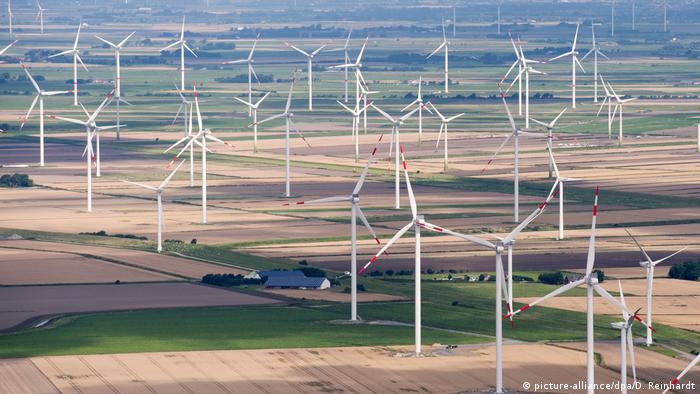 Powerful winds in the north can result in turbines being taken offline to avoid overloading the grid, even as fossil-fueled power stations are ramped up to meet demand in the south. In 2017 alone, these stabilization measures cost TenneT over €1 billion ($1.2 billion).

But experts say networking small-scale production units could do the job instead. "With home photovoltaic systems we need less curtailment of wind, and that is good for the energy transition, because it means that more renewable energy can be used," Hörchens said.

TenneT and its partner are trying to create a virtual energy pool. Its building blocks — individual households with storage batteries — are distributed over a wide area and digitally interlinked.

Smart software would allow each unit to react to changes in the grid in real time. Too little electricity on the grid, and they feed in the power they have generated themselves. Too much, and they draw it off — for example charging household appliances or electric cars.

Jean-Baptiste Cornefert, managing director of e-services at Sonnen, told DW blockchain was "basically the only way to handle" data from the vast number of household units potentially involved in such a network.

This technology could help smooth out peaks and troughs in the power system, and allow peer-to-peer trade between Sonnen's customers.

Blockchain can verify all these transactions without the need for a central main server. Information is encrypted and stored in bundles — or blocks — for each customer, making the whole process virtually immune to fraud or tampering.

With the program still in its test phase, Hörchens says there are only around 100 home storage systems in the network. This summer, TenneT will have gathered data on how this limited system works and decide if it can be expanded. With the right technology, home PV arrays could play a part in replacing conventional power plants

Sonnen spokesperson Mathias Bloch said if 10 percent of German households opted for a battery in their basement and hooked it up this kind of network they could provide 6,000 MW of capacity — roughly four times that of Germany's biggest nuclear reactor.

According to Fabian Reetz at Berlin-based think tank Stiftung Neue Verantwortung, most blockchain-based initiatives in the energy sector are not economically sustainable — not yet, at least.

So far, small-scale pilot projects, some sponsored by large energy companies, "are being conducted in order to gain experience," Reetz told DW.  April 2016 saw the first sale of excess solar power traded within a New York community via a peer-to-peer transaction platform.

The decentralized approach shows promise, but so far doesn't offer a positive return on investment, so companies remain cautious.

One stumbling block is blockchain's power-consumption. Critics say the huge amount of energy needed for the complex process of verifying transactions could make the system unworkable. Bitcoin has been accused of gobbling up as much electricity as a medium-sized European country.

Unlike the cryptocurrency, the TenneT-Sonnen project uses a private blockchain model, which is less decentralized in terms of computing power and requires fewer resources. It runs on open-source blockchain software Hyperledger, hosted by The Linux Foundation.

Reetz says as long as the number of households is small the verification process uses a manageable amount of power. "But as the structure grows, the process will become more costly," he warns.

Still, according to Reetz, "the biggest constraint" is not lack of computing power, but the need "to find prosumers who would be willing to participate."

A change of mentality

What's needed isn't just technological progress, but a change in mentality — from thinking of the power system as a supply we passively plug into, to a network in which each user plays an active role.

At this point, individual customers in the German market are still more interested in "a sturdy energy supply," than its means of its delivery, Reetz says. But he adds that the situation is "changing really fast."

Cornefert is cautious in his expectations, calling blockchain "an enabler for the industry" that "provides transparency by giving you options."

Reetz on the other hand, sees it as "the TCP/IP protocol" of the energy system, referring to the protocol which revolutionized the internet. And experience gained in the energy system could be applied way beyond it.

"In a couple of years," Reetz says, "we probably won't be talking about blockchain anymore, but about the applications built on it" — applications that embrace everything from data storage to online voting.

Carrefour: eggs and blockchain come together

French retail giant Carrefour has announced a major extension of its blockchain-based product traceability program. It allows for a transparent and secure sharing of information with the company's consumers. (06.03.2018)

Migration is on the rise in many nations. For those living outside their home country, Bitcoin remittance platforms offer a quick and cheap alternative for sending money back home to friends and family. (31.01.2018)