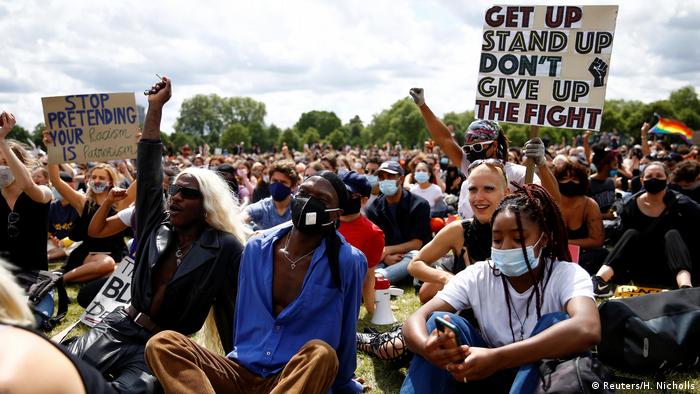 Hundreds of people joined Black Lives Matter protests across Britain on Saturday, marking the fourth weekend of anti-racism demonstrations in a row.

Large rallies were underway in Glasgow, Birmingham, Manchester, Edinburgh and the capital, London, where activists gathered in Hyde Park.

British campaigners have been staging protests since the death of African American George Floyd at the hands of police in the US city of Minneapolis last month.

Although the gatherings have been largely peaceful, clashes between rival groups of right-wing counterprotesters and anti-racism activists have erupted at some events.

Earlier this week, members of the far-right attacked a refugee-rights gathering in Glasgow, while in London far-right activists and protesters clashed with police.

Police in London reported Saturday that they had made dozens of arrests at recent protests and charged 24 people with offenses including assault, criminal damage and breaking social distancing rules.

Authorities have been urging people to stay home and observe coronavirus restrictions, which currently prevent more than six people from attending a gathering.

"We remain in a health pandemic," Metropolitan Police Commander Alex Murray said. "We value democracy and the right for people to have a voice, but would ask people to do so in another way, and not come to London to demonstrate."

Calls for a conversation

Among the activists' demands is that the UK faces up to its own history of slave trading, colonialism and racial inequality. Black Lives Matter London rejected calls from the police to end the protests, saying that the UK was "far from innocent, and therefore we must persist by reminding this country and government that Black Lives Matter."

Prime Minister Boris Johnson has pledged to set up a commission to address racial inequality, but critics say they want more urgent action. Protest leader Imarn Ayton, who demanded a meeting with the prime minister, says protesters would continue to march until their demands for equality and justice are met.

"I have been here every day, I am the person that leads 20,000 people every protest," she said. "Everyone else seems to be in contact with me, except for Boris, so I would like a conversation."

Also on Saturday, hundreds of demonstrators gathered in the French capital, Paris, to protest against racism and police brutality.

The crowd was set to march to the former home of Lamine Dieng, a Franco-Senegalese man who died in police custody in 2007, before joining up with another demonstration demanding rights for undocumented workers.

While those two gatherings were approved, authorities banned other protests, including a demonstration planned by the Black African Defense League near the US Embassy.

Protesters have pulled down a statue of a Confederate general in the US capital following nationwide rallies marking the end of slavery . The toppling comes just ahead of a controversial rally by President Donald Trump. (20.06.2020)

Police in the Netherlands have broken up rival protests at the statue of a Dutch East India Company officer. Colonial-era figures have become focal points of anti-racism protests around Europe in recent weeks. (20.06.2020)

Police have fired tear gas at protesters in Paris, with anti-racism rallies held in other French cities. A group of counterprotesters unfurled a banner against "anti-white racism" from a roof of a Paris building. (13.06.2020)

Over 100 arrested as UK far-right groups clash with police

'Gone with the Wind' and other stereotypical depictions in film

The current Black Lives Matter protests have also brought the issue of racism in film to the forefront. "Gone With The Wind" was temporarily removed from a streaming platform. But many other works are problematic. (17.06.2020)

UK Prime Minister Boris Johnson missed an urgent ministerial meeting on the heatwave to prepare for a leaving party at his country retreat. As the mercury rises, the UK has issued its first-ever extreme heat warning.