The EU has voted to denounce racism and police brutality both within the bloc and the US in a new resolution, adopting the slogan "Black Lives Matter." The resolution also condemns the "appalling death of George Floyd." 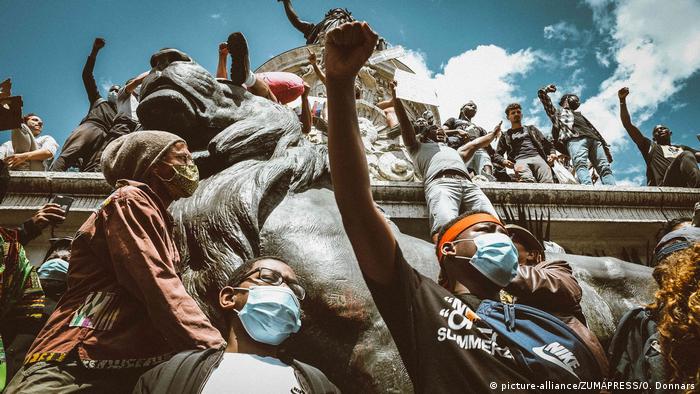 The European Parliament voted Friday to declare "Black Lives Matter" in a resolution to denounce racism and white supremacy. The resolution has no legal ramifications, but sends a signal of support to anti-racism protests.

Protests against racism and police brutality have spread across Europe in recent weeks after the killing of unarmed Black man George Floyd in Minneapolis in the US on May 25.

The resolution was passed by 493 votes to 104 and "strongly condemns the appalling death of George Floyd."

Resolution condemns US and EU alike

The resolution also condemns the heavy-handed reaction in the US to protesters and criticizes US President Donald Trump for his "inflammatory rhetoric" as he threatened to deploy the military against protesters.

However, EU member states were not exempt from criticism. The European Parliament called upon EU capitals to denounce "the disproportionate use of force and racist tendencies in law enforcement."

The new resolution also identifies the historic slave trade, which many countries in the bloc financially benefited from, as a "crime against humanity."

The European Parliament also passed a resolution on Friday which threatens China with legal action if Beijing imposes a new security law on Hong Kong. Also approved was a call for an investigation into the alleged misuse of EU funds by Czech Prime Minister Andrej Babis.

However, rights groups criticized the UN statement as it did not mention the US explicitly, accusing the body of caving to pressure from Washington.

The EU's resolution comes on Juneteenth, the historic anniversary of the end of slavery in the US. President Trump will host his first rally in Tulsa, Oklahoma on Saturday, the site of one of the country's worst race massacres in 1921. Trump threatened "any protesters, anarchists, agitators, looters or lowlifes" on Twitter ahead of the rally.

Trump has ignored his own government's public health advice to slow the spread of coronavirus in hosting the rally.

A previous version of this article included a quote attributed to EU lawmaker Miriam Dalli. This has now been removed. The department apologizes for the error.

For years, workers at McDonald's around the globe have complained of sexual harassment. As part of a push for corporate accountability, the fast-food chain's accusers were invited to speak at the European Parliament.