Two British companies with historical links to the slave trade have pledged to invest in projects supporting black and other minority ethnic communities. Lloyds and Greene King were listed on a slavery legacy database. 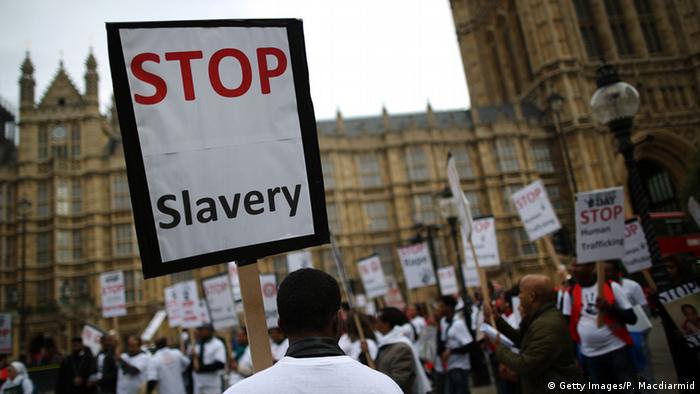 The companies made the commitments in light of their links to the slave trade. Both firms were included in a database of companies compiled by University College London (UCL).

Greene King was founded in 1799 by Benjamin Greene, who was among the 47,000 people who received compensation paid to slave owners when slavery was abolished in the British Empire in 1833. Greene gave up three plantations in Montserrat and St. Kitts for the equivalent of 500,000 pounds (€555,000, $628,000) in today's currency.

"It is inexcusable that one of our founders profited from slavery and argued against its abolition in the 1800s," Greene King chief executive Nick Mackenzie said. "We don't have all the answers so that is why we are taking time to listen and learn from all the voices, including our team members and charity partners as we strengthen our diversity and inclusion work."

Stage #6: Slavery, the Greatest of All Evils

The records also show that Simon Fraser, a founder subscriber member to Lloyds, was given the equivalent of 400,000 pounds for his estate in Dominica. Founded in 1688, Lloyds also insured slave ships.

"Recent events have shone a spotlight on the inequality that black people have experienced over many years as a result of systematic and structural racism that has existed in many aspects of society and unleashed difficult conversations that were long overdue," said a statement from Lloyds. "We will provide financial support to charities and organisations promoting opportunity and inclusion for black and minority ethnic groups."

The promises were made as the UK grapples with its legacy of the slave trade in response to the Black Lives Matter movement.

The movement has gained renewed prominence amid global protests over the death of George Floyd, an unarmed black man, during an arrested by white policeman in the United States. Earlier this month, protesters in the southwestern English city of Bristol pulled down a bronze statue of the 17th century slave trader Edward Colston. The statue was dumped in the local harbor.

Tens of thousands of people have gathered in Berlin and across Germany to support the Black Lives Matter movement. Other European cities including London also saw huge demos, while three rallies in Paris were banned. (06.06.2020)

Protesters in the UK have pulled down a statue of a slave trader during a demonstration in honor of George Floyd. Since Black Lives Matter protests began, controversial statues have come down in cities around the globe. (07.06.2020)

While colonial-era statues are being torn down in the UK and Belgium, some Eastern European countries have already banished communist-era monuments to isolated parks. Are there better ways to deal with canceled "heroes"? (18.06.2020)