The patriotic song Rule Britannia tells Britons they will "never, ever be slaves." Yet millions were enslaved or traded by the British, who reaped economic gains. DW examines the debate in Britain today. 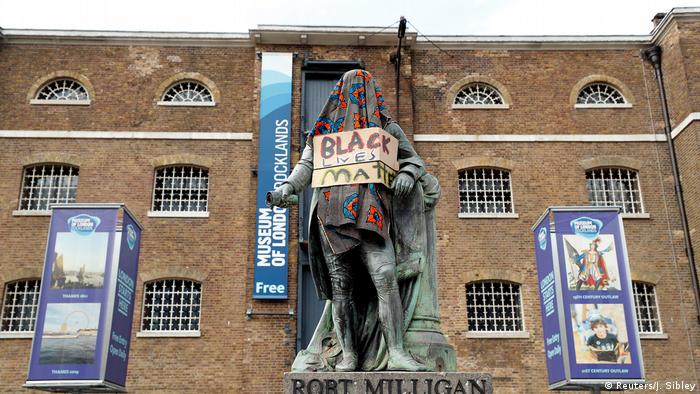 With statues coming down or threatened to be pulled down all over the UK, following protests initiated by the Black Lives Matter movement in the US, interest in the origins and lasting effects of the slave trade have spiked. And Britain, which was deeply enmeshed in the slave trade in the 17th and 18th centuries, sits on one of history's deepest fault lines.

The historian David Richardson has calculated that British ships carried 3.4 million or more captured Africans to the Americas, with estimates of the total number of enslaved African transported by European traders at 12 million.

"The industrial revolution, and the contribution of slavery to Britain's economy, were deeply intertwined, making it hard to pinpoint the exact long-term impact of slavery," Richard Toye, co-author of a forthcoming book The Churchill Myths, told DW. 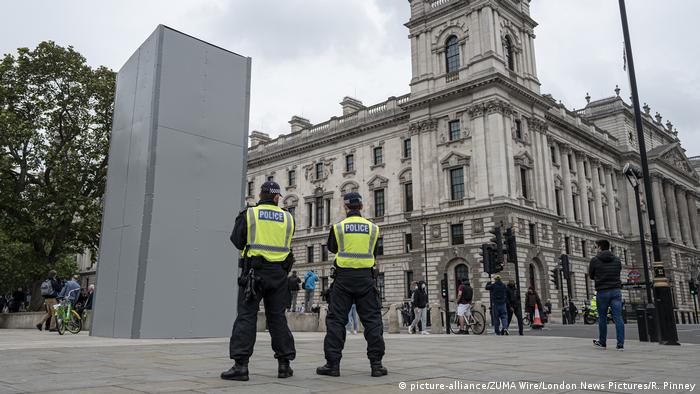 As Brits are searching their souls about the UK's colonial past, even statues of former prime minister Winston Churchill have become fiercely contested and need to be protected by police from the wrath of protesters

Making profits from the labor of the enslaved

The "triangular trade" saw ships sail from Britain loaded with goods, which were exchanged on West African shores for Africans captured by local rulers. These enslaved African were transported across the Atlantic and forced to work in plantations. The ships were then loaded with the products of slave labor, export crops and commodities like sugar and rum, and returned to Britain to be sold.

The sugar plantations were key to creating Britain's most valuable colonies. By the end of the 18th century, Bristol, Glasgow and Liverpool had become major ports handling the cargoes brought back.

"Britain's slavery economy was enormous and extremely complex," Ryan Hanley, history lecturer at the University of Exeter, told DW. "While it is not possible to provide an exact figure of just how much British money was linked to the profits of slavery, it is clear that the economy benefited enormously from the exploitation of African slave labor in the Caribbean," he says.

The slave trade was also key in the development of the wider economy. "The copper bars that some British merchants traded for enslaved Africans, for example, were produced in South Wales, as were the cheap woolen garments used as uniforms for the enslaved in the West Indies," Hanley says.

"Clearly, slavery and colonialism were intimately linked to the development of much of the financial infrastructure that enabled Britain to emerge as the economic and imperial global powerhouse of the nineteenth century," he adds. 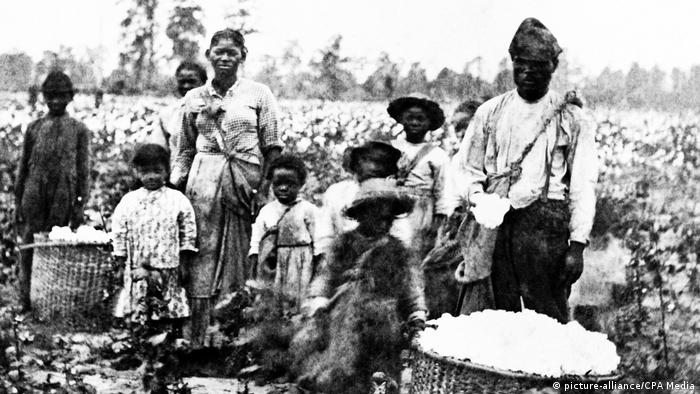 The number of people shipped in the "Triangular trade" was so huge that enslaved Africans became the most numerous Old World immigrants in North America in the late 18th century. But far more slaves were taken to South America

The trade gave a big stimulus to the insurance industry. Slave traders' need for large amounts of credit was also significant in the establishment of a number of the country's largest banks; Lloyd's of London, Barclay's Bank and the Bank of England all have some connection to the consolidation or expansion of British slavery, Hanley notes.

In light of their links to slave trade, Lloyd's of London and the pub chain Greene King  recently have pledged to financially support projects that help ethnic minorities. Greene King chief executive Nick Mackenzie said it was "inexcusable that one of our founders profited from slavery and argued against its abolition in the 1800s."

Edward Colston (1636 - 1721), whose statue was pulled down in Bristol, left a large endowment to the Society of Merchant Venturers, an organization which was instrumental in developing the Great Western Railway during the Victorian period. "Indeed, much of the financing of the railroads, that beloved symbol of Victorian industrial progress, has been linked to the compensation payouts given to slave owners," says Hanley.

However, some historians question whether the slave trade so thoroughly permeated Britain's everyday economy. "Generally people fed, clothed and housed themselves without drawing on any product manufactured by slave labor," says David Eltis, a professor of history at Emory University who runs the slavevoyages.org website.

"Sugar, coffee, rum, comprised a trivial share of British diets," he told DW. He is critical of the links with industrialization and notes the largest slave trader and the largest slave empire in the Americas were the Portuguese and Brazil.

"Britain industrialized, Portugal did not, or at least not until much later. How could slavery and the slave trade have had anything to do with the development of the West? Germany, Italy and others had no links with Africa and the Americas, yet reached developed status anyway," he says.

It was not until the Slavery Abolition Act of 1833 that the institution was finally abolished in the British Empire. Slave owners in the British West Indies received compensation of 20 million pounds, estimated at about 20 billion pounds in today's money.

This was at roughly 40% of the government's budget, the largest state-sponsored payout in British history before the banking crisis of 2008. The government took out a loan to pay it, which was only paid off in 2015. Among those who received payouts, according to researchers at University College London (UCL), were the family of ex-Prime Minister David Cameron and the Church of England.

"After abolition, a great wrong was done when it was decided to compensate the former slave owners rather than those who had been enslaved," Toye believes.

"We cannot now try to edit or censor our past," UK Prime Minister Boris Johnson said last week as the debate about statues flared in the UK. In 2002 Johnson wrote in a column written in The Spectator that British colonialism in Africa is "not a blot upon our conscience … The problem is not that we were once in charge, but that we are not in charge any more."

Catherine Hall, head of a research project into slavery at London University, believes slavery has been forgotten in conventional British history. She told BBC Radio 4's Today program, "What's been remembered is abolition rather than the slave trade and extraordinarily many people do not know about Britain's colonial past in relation to slavery," she said.

The historian David Olusoga wrote in The Guardian newspaper that Britain's education system has, for decades, "rejected pleas and requests" made by two generations of black British people for black history to be made a core part of the national curriculum.

"As a result it is a national blind spot, a gap in our collective knowledge that affects us all — black and white," wrote Olusoga.

Hanley says Britain is undergoing a reckoning with its colonial past and how that continues to affect the present. "For many people that process will be painful: historical truth-telling often is," he believes.

Andy Hall, a labor rights activist told DW that it was important to remember that modern forms of slavery still exist and are "systemic around the world, particularly in many of the supply chains servicing the UK market." An estimated 24.9 million people are in forced labor globally, according to the International Labour Organization (ILO).

Under Britain’s 2015 Modern Slavery Act, all businesses with a turnover of over 36 million pounds are obliged to produce an annual statement outlining actions they have undertaken to combat slavery in their supply chains. But many of the world’s top brands have failed to do so, CORE, a watchdog on corporate accountability, said.

"The level of complacency from major companies, particularly those that trumpet their corporate social responsibility, is startling," CORE's former director, Marilyn Croser, said in a statement.

The central bank in the Netherlands admitted that early directors profited from plantations in the Caribbean and South America and advocated against the Dutch abolition of slavery.