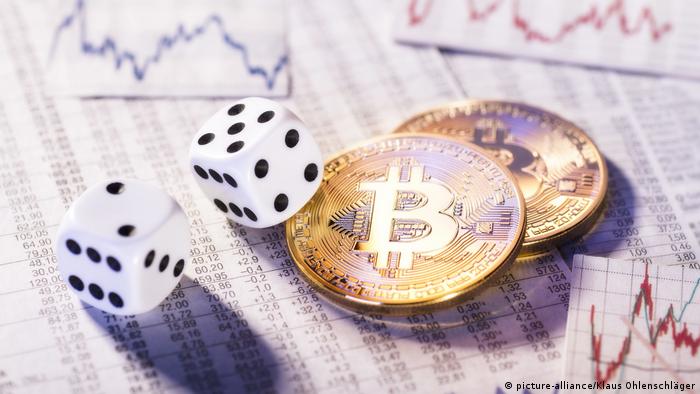 Social Media influencers may be predicting an "insane recovery" soon in the value of Bitcoin and other cryptocurrencies, but many would-be investors can only look longingly at last December's $19,764 (€17,154) price, and wonder 'What have I just missed?'

2017 was a stratospheric year that saw Bitcoin grow almost 2,000 percent from barely $1,000 in January to eye-watering all-time highs. This year, however, holders of the world's biggest digital currency have seen much of their considerable profit disappear.

Last week, Bitcoin fell further — below $6,000, having traded as high as $8,000 since the start of the summer. The likes of Ethereum, Litecoin and Zcash — which are all traded online, independently of central banks, all saw similar falls.

Many coins are worthless

Bitcoin and Co. have so many proponents in the digital world, but still so few financial sector backers that it's hard to predict whether a recovery is imminent or if, as some bearish analysts have warned, they won't survive another crypto-winter — the nickname given to the period in January when their values first nosedived.

"It's largely speculation driving prices up and down and it's really impossible to tell where they're going to go next," Dominik Rehse, a specialist in blockchain technology at Germany's Centre for European Economic Research (ZEW) told DW.

The Financial Times (FT), meanwhile cited Peter Hetherington, the CEO of the online trading platform IG, as saying that interest in trading cryptocurrencies has now dwindled. Co-founder of the fin-tech consultancy Simon Taylor told the business daily that the hype around digital currencies "has gone."

Since they first emerged a decade ago, digital currencies have been dismissed as Ponzi schemes, and as conduits for money laundering — it was even reported that Bitcoin was used by the "Islamic State" (IS) armed group to move cash. JP Morgan Chase Chairman and CEO Jamie Dimon famously labelled Bitcoin a "fraud," before admitting that the blockchain technology is "real."

Yet cryptocurrencies are thought to have enrichened tens of thousands of investors, and turned a handful into billionaires.

Institutional investors on board?

Despite the doubters, and this year's bubble bursting, establishment investors — who, until recently, remained on the sidelines — continue to show interest in the neo-currencies. Just last month, US investment giant BlackRock said it was setting up a working group to look into cryptocurrencies, and the blockchain technology that underpins them. The news helped Bitcoin to rebound some 5 percent.

Further establishment acceptance will be key to the further growth of the crypto-giants going forward, especially as they remain unregulated in most countries, Rehse said.

"It very much depends on how regulators continue to react to these new technologies, and whether we can find productive uses for them beyond being a payment platform outside the existing financial system," he told DW.

At the G20 finance ministers' summit in Argentina in March, the world's wealthiest countries agreed to regulate cryptocurrencies to some degree — to help tackle security concerns following a rise in the hacking of crypto-exchanges.

Several countries have moved first, including Russia, where a new law to regulate digital currencies is currently being debated by parliament. Rehse also gave the example of Japan, which plans to issue official crypto tokens and currency for the 2020 Tokyo Olympics.

Other countries, including Germany, remain hesitant in creating environments for the digital assets to flourish, Rehse added.

"Governments need to be careful not to miss out on this vital innovation, which is really driving large areas of economic activity," he warned.

This year's price volatility in cryptocurrencies is an exaggerated form of what global stock markets have recently experienced. The threat of a global trade war, and uncertainty over the future growth potential of several US tech giants, has seen share prices wobble, just to a lesser degree.

For cryptocurrencies to gain mainstream acceptance, their volatility will need to be steadied, which both regulation and the participation of major financial industry players should help.

"Just like countries with high inflation often struggle due to unstable currencies, the same applies for cryptocurrencies. For them to become a commonly accepted method of payment, they need to be stable," Rehse told DW.

A handful worth investing in

Since Bitcoin's invention, some 1,000 copycats — many of them scams — have fallen by the wayside. Even so, some 2,000 cryptocurrencies remain in operation, leading many pundits to predict consolidation in the near term. After all, only 15 coins have a $1 billion plus market capitalization, according to the FT.

ZEW's Reyse warned that cybercriminals or some other technical issue, could suddenly hit any of the largest crypto platforms, for example Ethereum — whose technology drives a lot of other digital assets, which could "render all these currencies obsolete."

In the meantime, the huge energy consumption required by most blockchains to process cryptocurrency transactions is also likely to come under further regulatory scrutiny, which could see more digital coins and token platforms forced out of business.

Crypto-enterpreneurs hope that rather than government intervention, and too much red-tape, new innovations could offer the sector the potential for the next growth spurt.

"Any kind of new technology that reduces the energy used in blockchain could lead to a considerable increase in interest in cryptocurrencies and a rise in the number of new coins," Rehse predicted.

Apple Inc supplier Foxconn has agreed to manufacture a blockchain phone from startup Sirin Labs. The contract electronics maker's entry has heated up the race for a phone aimed at digital coin aficionados. (10.04.2018)