Democracy and human rights were the focus of talks between the US president and Belarus opposition leader Sviatlana Tsikhanouskaya in Washington, DC. 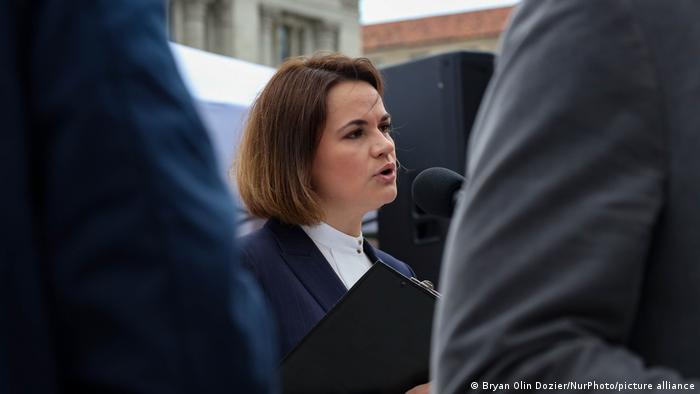 US President Joe Biden reiterated his support for democracy and human rights in Belarus in talks with opposition leader Sviatlana Tsikhanouskaya in the White House on Wednesday morning.

"I was honored to meet with @Tsihanouskaya at the White House this morning. The United States stands with the people of Belarus in their quest for democracy and universal human rights," said Biden via Twitter.

For her part, Tsikhanouskaya released a tweet reading: "Thank you, @POTUS, for a powerful sign of solidarity with millions of fearless Belarusians who are peacefully fighting for their freedom. Today, Belarus is on the frontline of the battle between democracy and autocracy. The world stands with us. Belarus will be a success story."

Why is Tsikhanouskaya in the US?

Tsikhanouskaya is trying to garner support for stronger action against Belarusian President Alexander Lukashenko and his regime. She has also met with US Secretary of State Antony Blinken and White House National Security Adviser Jake Sullivan.

Last week, she urged the US to impose sanctions on companies in Belarus' oil, potash, steel and wood industries.

Tsikhanouskaya spoke with DW about sanctions while in Berlin last month, saying: "Lukashenko only understands the language of force and economic sanctions. This is the mechanism that should be used ... the sanctions must be maximally tough."

Her calls follow last year's presidential elections, which were widely regarded as unfair and corrupt.

Lukashenko's claims of election victory sparked nationwide protests that resulted in mass arrests and human rights abuses that have been condemned by Western democracies.

Tsikhanouskaya, who lives in Lithuanian exile and whose husband is currently a political prisoner in Belarus, confessed she is often tired and scared. "But I understand I have no right to give up, because people who are in jail didn't give up. They now are suffering for us," she said.

"Only these people, the families of those repressed in Belarus, have given me the energy to go on," she added.

Asked whether she believes she can return to Belarus, Tikhanovskaya said: "I'll go back home, as soon as my home is ready for me."

The Belarusian leader said "ill-wishers" are "trying to strangle Belarus" in his first speech since a commercial flight was intercepted and a critical blogger arrested.