The Russian-German singer made it onto Forbes' top 10 of highest-paid women in music. While all the other stars on the list are international household names, "Schlager Queen" Helene Fischer is a very German phenomenon.

Katy Perry and Taylor Swift are way at the top of Forbes magazine's list of 10 best-paid women in music published earlier this week, followed by a series of other well-known pop stars:

Anyone outside the German-speaking world who's remotely in tune with today's pop music charts will certainly recognize all those names — except one: Helene Fischer.

According to the highly regarded business magazine, Fischer's pretax earnings from June 2017 through June 2018 were at least a million dollars higher than Celine Dion's and Britney Spears'. Another list published by the New York Times earlier in November determined that she was the seventh most successful concert artist in the world.

That led many music insiders to ask: But why don't I even know her?

The successful star has found her own — very mainstream — niche in German-speaking countries, which is why her promoters didn't put that much energy into promoting her only English album, titled The English Ones, from 2010.

She has been dubbed the "Queen of Schlager," a genre so German there's no proper translation for it (Wikipedia helpfully points out that it's also known as "entertainer music" or "German hit mix" in the US). It's a kitschy form of sentimental pop that has developed over the years, going from happy-go-lucky schmaltzy anthems in the 1960s to become closely associated with Euro-disco music today, the shrill sugary style that has made the Eurovision Song Contest so popular. 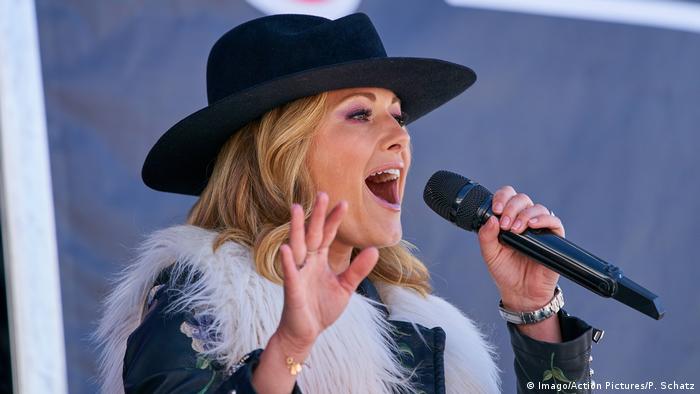 From Siberia to Germany's best-selling star

Born on August 5, 1984 in Siberia's Krasnojarsk, Fischer emigrated to West Germany with her family at the age of three. After studying music at the Frankfurt Stage & Musical School for three years and performing in musicals such as the Rocky Horror Show, she released her first album in 2006, titled Von hier bis unendlich (From Here Till Forever). Her singles quickly made it to the top of Germany's different "hit parade" shows.

She has since sold over 13 million albums. No other star has collected nearly as many Echo Awards (which was until this year Germany's top music prize, based on commercial success) as she has: 17.

Her latest, self-titled, album debuted at No 1 in the Austrian, German and Swiss albums charts in May 2017 and has sold over 700,000 copies within a year. The tour that followed, developed in collaboration with Cirque du Soleil acrobats, started in September 2017, and filled stadiums throughout the German-speaking world. The average ticket price of €71.50 ($81), along with various advertising contracts, contributed to her landing among the world's best paid entertainers.

Helene Fischer "has managed to bring schlager to the mainstream. Up until about 15 years ago, it existed in a parallel universe," Ingo Grabowsky, an expert of the genre, told DW. Even though some of schlager's most popular stars already filled stadiums before her, "it was just a certain group of people that listened to schlager. Today, enthusiasm for the genre has even reached academic circles."

Still, despite her widespread popularity, she is not everybody's darling. "Either you adore her or you reject her," said music expert  Volkmar Kramarz. "Helene Fischer has become a symbol for the fact that an artist can, on the one hand, be popular and successful, but at the same time be completely rejected by a huge part of the public."

Now that Fischer's name has been circulating in the English-speaking press, longstanding rumors that she might be considering a career move to the US have also been reactivated.

Fischer's idol, the Canadian singer Celine Dion, has announced the end of her extremely profitable concert residency in Las Vegas for the summer of 2019, which means there'll be a vacant spot at The Colosseum Theater at Caesars Palace.

Asked about the possibility a few months ago, Fischer replied: "Of course it's an attractive idea. But I couldn't answer that yet. One should however never say never."

Helene Fischer is the ultimate German pop queen, wildly successful nationwide. Should anyone plan to sell decals or compression hosiery using her name, they better think twice — her name is registered as a trademark. (06.07.2018)

Helene Fischer. A career in pictures

German folk pop star Helene Fischer releases her new album on May 12. The self-titled collection of songs is the latest highlight in an unparalleled music career. Here's a look back at the rest. (12.05.2017)

After a four-year gap, Germany's biggest pop star is back with a single featuring Luis Fonsi of "Despacito" fame. Is Fischer eyeing the international market?

Billie Eilish, Madonna and Elton John were among dozens of stars taking part in the digital event to raise money for Ukrainian and other refugees worldwide.