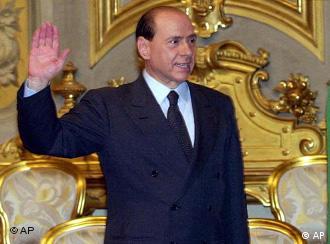 Soon to be back in the dock?

The law, which was passed last June, gave the country’s five highest officials immunity, but it has been criticized as existing solely to end Berlusconi’s numerous legal headaches. Dubbed “Lex Berlusconi” by some, it helped the prime minister avoid possible conviction while Italy held the rotating EU presidency last autumn.

Since the court has determined that the law is unconstitutional, Berlusconi will once again face trial for allegedly bribing judges in the 1980s while he was a business man. The trial had been stopped after the law went into effect.

“Every man is the same before the law,” Antonio Di Pietro, an opposition member of parliament and former crusading prosecutor, told the Associated Press after the legislation was annulled.

But Berlusconi’s justice minister Roberto Castelli criticized the verdict, saying it could complicate relations between politicians and the judiciary. “I fear after this verdict the polemics will become even worse,” he said.

Berlusconi has repeatedly contended that he has done no wrong and left-wing magistrates have mounted an unfounded campaign against him. In the face of a possible onslaught of politically motivated legal action against him, Berlusconi is reportedly considering calling early elections.

“If that’s how things stand, then it’s better to go back to the polls,” he told the daily newspaper Corriere della Sera.

A billionaire media mogul turned politician, Berlusconi has gone to court eight times over the past decade for varying corruption offenses. He has been found guilty several times, however, by winning on appeal or due to the statute of limitations nothing has stuck to the "Teflon premier."

Though the latest case against Berlusconi was stopped this summer after the immunity law was passed, the trial against his business associated continued. A key charge that a firm owned by Berlusconi bribed judges to win approval of a corporate takeover in the 1980s was rejected, but a court did convict Berlusconi friend and lawyer Cesare Previti of paying off a Rome judge. Previti is currently appealing his sentence of five years in jail.

Berlusconi, Italy’s richest man, has repeatedly run into trouble due to his business dealings. In December, Italian President Carlo Azeglio Ciampi decided not to sign a new media law that the opposition fears would add to the influence of the prime minister’s already powerful media empire.

Berlusconi owns three Mediaset channels, Italia 1, Rete 4 and Canale 5 and as premier wields political influence over the board of state public broadcaster RAI, Mediaset's only serious competition. Berlusconi's holdings have long made him the subject of serious conflict of interest allegations.

Italian Premier Silvio Berlusconi steps down as EU Council president Wednesday. He is likely to be remembered longer than his predecessors: Not for scarce political successes but rather his flamboyant personality. (December 30, 2003)

Just weeks before Italy gives up its rotating presidency of the EU, the country's Constitutional Court is to rule on whether to overturn a law which ensures legal immunity for Prime Minister Silvio Berlusconi. (December 9, 2003)