Italian Premier Silvio Berlusconi steps down as EU Council president Wednesday. He is likely to be remembered longer than his predecessors: Not for scarce political successes but rather his flamboyant personality. 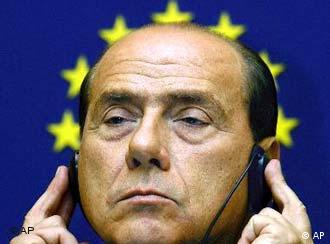 European Union officials had mixed feelings last July when Berlusconi took over the EU Council presidency, an agenda setting role that rotates among member states every six months. As a multi-billionaire media mogul, Berlusconi controls most of Italy’s television and has frequently been known to push for legislation to serve his personal needs.

While managing to evade charges of forging balance sheets, illegal campaign financing, tax fraud and bribing, he called Italian judges “red robes” and accused them of planning to overthrow his government.

A Nazi comparison for starters 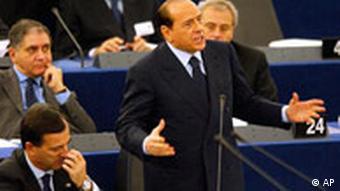 Berlusconi talks before the European Parliament in Strasbourg.

At least one EU parliamentarian got a dose of classic Berlusconi when the Italian made his inaugural visit to the EU legislature. He attacked the German Social Democrat member, Martin Schulz, after Schulz had sharply criticized the conservative prime minister.

“Mr. Schulz, I know there is in Italy a man producing a film on the Nazi concentration camps," he said. "I’d like to suggest you for the role of guard. You’d be perfect."

The two men later exchanged apologies, but it was difficult navigation for the Italian presidency from then on. For one, German Chancellor Gerhard Schröder was annoyed at Berlusconi and lost no opportunity to make his thoughts known.

“In both content and form this (Nazi) comparison is a derailment,” he said in Germany’s parliament, the Bundestag, and demanded an apology from his Italian counterpart.

In terms of his work at the helm of the EU, Berlusconi's presidency was overshadowed by the failure to negotiate an EU constitution. Many delegations in Brussels said that Berlusconi’s chaotic management during the talks contributed considerably to the summit’s falling apart.

Berlusconi on the other hand didn’t consider the summit a complete failure.

“We have actually reached agreement on 82 contentious points where it seemed almost ruled out,” he said. “So in that sense the conference did have a positive outcome.” Diplomats who took part in the negotiations dispute this.

Right after the summit, the Italian president declared his presidency to have been one of the most glorious of recent years. 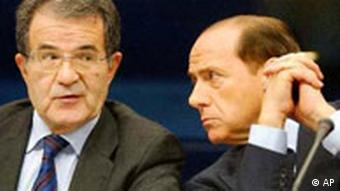 That’s been called into question most vocally by the president of the European Commission, Romano Prodi, a fellow Italian who was locked with Berlusconi in a covert election campaign because he intends to head the left's candidacy against the prime minister in the next Italian election. Prodi said that of the 13 big goals set out for the Italian presidency, only five were implemented.

The most important initiative during the last half a year was the economic program called "Quickstart" which is designed to push a number of infrastructure projects costing billions, Prodi said.

Berlusconi lists as a success the establishment of a European border protection agency and the distribution of new European authorities to ten member states. He satisfied a personal wish by fetching the agency for food safety to Parma. His argument was that there are so many good restaurants in the town famous for its seasoned, salt-cured and air-dried hams.

The Italians didn’t facilitate progress on another major matter: EU member states still can’t agree on a structured immigration and refugee policy. Despite his earlier confrontation with Berlusconi, Germany’s Martin Schulz stirred things up again in July when he had accused the Italian of preventing the introduction of a Europe-wide arrest warrant out of his own interest. And now, six months later, nothing had happened yet on that.

“Regretfully, I have to say that you not only didn’t do your homework, but you’ve failed totally,” Schulz said.

That time Berlusconi said nothing.

Berlusconi Stirs up a Storm with Mussolini Comments

Following the collapse of the EU summit last weekend, Italy’s Silvio Berlusconi has been criticized for not securing a deal on a new constitution. On Tuesday he had to defend his EU presidency to the European Parliament. (Dec. 17, 2003)

Parliamentarians Give Berlusconi an "F"

In a highly defensive appearance before the European Parliament on Wednesday, Italy's prime minister alienated many with his Nazi jokes. But he did lay out a solid plan for his country's leadership of the EU. (July 4, 2003)