Berlusconi Stirs up a Storm with Mussolini Comments | Europe | News and current affairs from around the continent | DW | 12.09.2003

Berlusconi Stirs up a Storm with Mussolini Comments 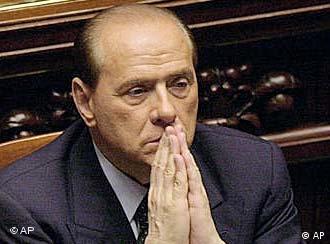 Back in the hot seat -- Italian Prime Minister Silvio Berlusconi.

Two months after the Italian prime minister sparked outrage with a comparison of a German member of the European Parliament to a Nazi concentration camp guard, the scandal-prone Silvio Berlusconi has once again appalled critics and allies alike with controversial remarks glossing over a dark chapter of Italy’s past.

In an interview published in the British magazine Spectator on Thursday, Berlusconi appeared to defend the actions of Italy’s former fascist dictator Benito Mussolini, who was allied with Nazi dictator Adolf Hitler in World War Two. When asked if Mussolini was "benign," Berlusconi replied: "Mussolini never killed anyone. Mussolini sent people on holiday in internal exile."

The prime minister later said he had reacted "as a patriot, as a real Italian" when his interviewers had compared Mussolini to deposed Iraqi dictator Saddam Hussein. "I never intended to reevaluate Mussolini," Berlusconi said.

The Italian leader also attacked the opposition and accused it of manipulating his words, adding that he couldn’t understand why he constantly faced a barrage of criticism as head of the government.

The Italian prime minister’s latest gaffe has provoked anger and touched a raw nerve in a country, whose postwar democracy was founded on an anti-fascist consensus.

Mussolini, also known as "Il Duce" (the leader), ruled from 1922 to 1943 with an iron fist and attempted to create an Italian empire in alliance with Hitler’s Germany. He introduced Italy’s first anti-Semitic laws in 1938, which paved the way for the eventual deportation of around 7,000 Jews to Nazi concentration camps.

The leftwing opposition was livid on Friday and vowed Berlusconi wouldn’t head a democracy born out of the World War Two resistance movement for long. Pierluigi Castagnetti, parliamentary party leader of the Margherita party, told Reuters the prime minister’s remarks were "incredible and shocking."

The Italian prime minister’s latest blunder even had his own party ranks and members of the far right National Alliance, which traces its roots back to Mussolini’s fascist movement, squirming in embarrassment. Many made no bones about their dismay.

"Anti-fascism is a value that unites," said Luca Volonte, parliamentary leader of the Christian Democrat Union, an important part of Berlusconi’s governing coalition. "It unites the majority. It unites the government with the opposition. It unites the country. To split over that which unites is senseless."

Some of Berlusconi’s political allies rallied to his defense, blaming the uproar on a twisted interpretation of the premier's words.

"I don’t want to believe that the prime minister made the comments on fascism reported by the news agencies," Giorgio La Malfa, leader of the Republican party said. Agriculture Minister Gianni Alemanno of the National Alliance said: "I hope this is a journalistic error."

Italian papers on Friday struck a resigned note as Berlusconi’s latest verbal faux pas hit headlines. Even the usually pro-Berlusconi daily Il Tempo ran a title "The only thing he (Berlusconi) didn’t do is call Mussolini an honest man". The paper La Repubblica had a story headlined "Berlusconi Lets Fascism off the Hook".

The uproar marks the latest in a string of verbal slips for Berlusconi ever since Italy took over the six-month rotating EU presidency in July this year, which has given the Italian leader a more prominent role on the European stage. 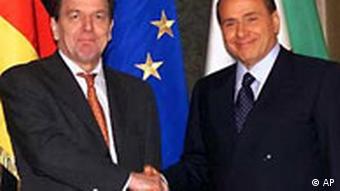 Berlusconi’s debut as EU head earned a notorious reputation with the by now infamous Nazi comparison that created a rift with Berlin. It was followed by an escalating row between Berlin and Rome after a junior Italian minister spoke degradingly of German tourists, which led German Chancellor Schröder (photo, left) to cancel his summer vacation to Italy. Berlusconi refused to apologize. Last week, in the first part of the Spectator interview, Berlusconi drew ire with his comments that Italy’s judges were "mentally disturbed" and "anthropologically different" from other people.

The glib prime minister, who insists he is often misquoted and misunderstood by the media, remained unruffled this time too. "I’m sure of myself. I’ve never been down because of the criticism that seems to be unfounded, in my opinion," Italian news agency AGI quoted Berlusconi as saying this week. "I have fun seeing people’s reactions, and will continue to be myself."

Basta! The Chancellor Has Enough of Pasta!

The chancellor's scrapping of his Italian holiday following insulting remarks by an Italian minister earned him plaudits as well as criticism, but fears remain whether diplomatic ties can weather the current crisis.(July 11, 2003)