How do you make a city more sustainable? One street in the Berlin neighborhood of Kreuzberg is trying to figure that out with local democracy, yellow furniture and green dots. But not everyone is happy. 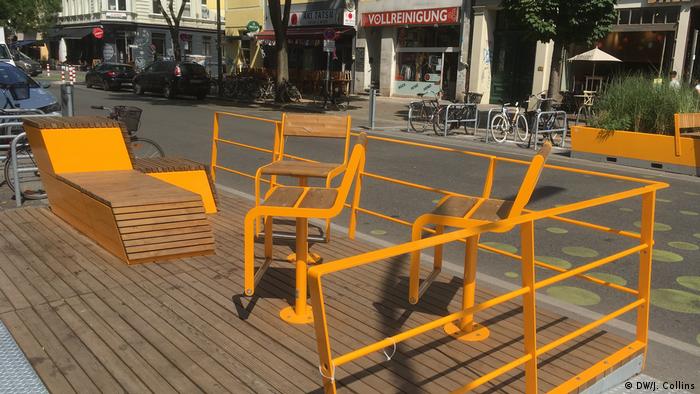 In the scorching summer sunshine, a few people have taken respite by sitting on the canary-yellow metal furniture dotted along Berlin's leafy Bergmannstrasse.

The new street furniture is part of a government-run test phase to turn the street into a "meeting zone," aimed at making the street in the city's Kreuzberg-Friedrichshain district greener by reducing traffic and improving poor air quality.

Read more: A day in the life of eco-Berlin

Once a quiet street, Bergmannstrasse is now wildly popular among tourists and Berlin newcomers alike. Over the past decade, Berlin itself has grown twice as fast as city planners predicted and between 2013 and 2018 more than 15,000 extra people moved to the district. Today cars, bikes and people jostle for space.

But not all locals are convinced the changes will benefit the area.

Romina Bassarino from Argentina, one of the people taking a break on the "nice and comfortable" seats, has mixed views.

"I think it would make more sense if more people used them — usually they are empty," said 37-year-old Bassarino, who has been living in the neighborhood for nine years. 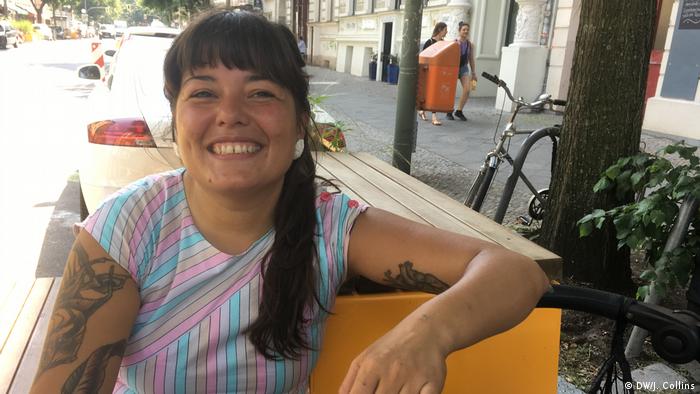 Read more: Living next door to tourism in Berlin

Other responses range from outright confusion to anger.

Ingrid Saniwski has lived in the Bergmann neighborhood since fleeing Soviet-occupied Lithuania with her family 55 years ago. She says today the "totally ugly" seats are empty. But in the evening that changes.

"At night people are having parties [on the benches] ...People are complaining that they can't sleep," she said.

As for one of the other measures — green dots painted on the road to encourage road traffic to slow down — the 76-year-old had this to say: "You couldn't get anymore loony than those green dots. What are they supposed to be?"

Hans-Peter Hubert, a long time resident in the area, fought to ensure that locals were involved in Bergmannstrasse zone decision process. Hubert and the initiative he founded to reduce traffic on a street adjacent to Bergmannstrasse helped establish a steering group of residents and representatives from the city government to guide a citizen participation process. 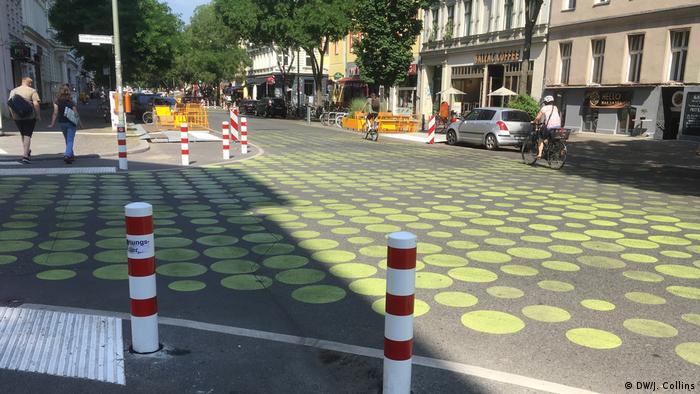 Since then, they've held workshops and meetings with hundreds of participants from the area, and citizens like Saniwski and Bassarino can now provide feedback about the changes, including the green dots, online.

While the process hasn't been without its challenges, Hubert says 300 locals turned up to their last workshop in May and were thinking constructively and creatively about how their neighborhood should look.

That's in contrast to their first meeting on the project in 2014 when people "were jumping up, throwing chairs, shouting slogans and insulting the government representatives," said Hubert.

Still, the question of how and if Bergmannstrasse will ultimately be transformed after the test phase finishes in November remains open. The local government will vote on a final concept for the green area once they've evaluated local opinion. 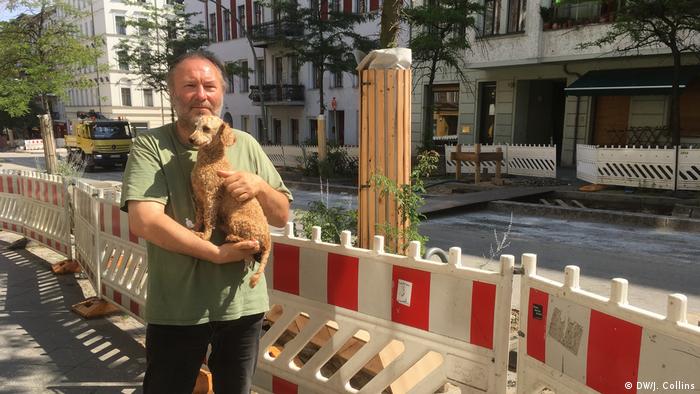 "I'm curious to see if there will be a consensus," said Florian Schmidt, local Green Party councilor for building, planning and facility management, involved in the project. "But when we discussed it at the last workshop with about 300 people, the consensus was that cars should be reduced. Car traffic was really the most important point."

Schmidt thinks citizens participation is good in theory but "can take a really long time." Instead it might be a better option to work more with initiatives that want to make urban mobility greener, he said.

Changing Cities is one such initiative in Germany pushing to change how people get around. In 2016, the group started a cycling campaign that eventually pushed the Berlin Senate to pass Germany's first "mobility law," which aims to improve public transport and introduce thousands of kilometers of new bike lanes by 2030.

Berlin seriously lags behind bicycle-friendly cities like Copenhagen and Amsterdam in terms of infrastructure and, in recent years, has become increasingly dangerous for cyclists. 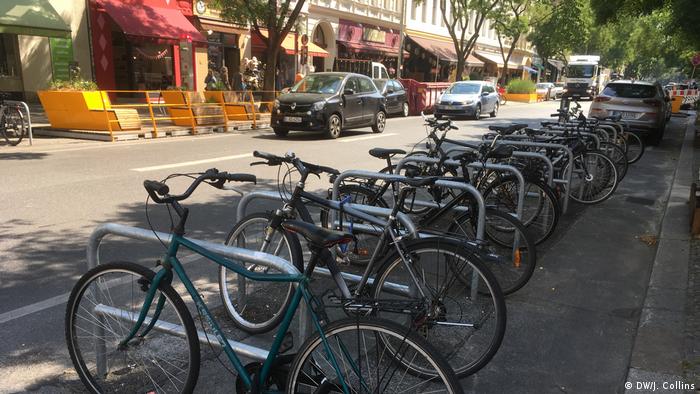 Berlin is lagging behind other cities when it comes to bike infrastructure. But on Bergmannstrasse, car parking spaces have made way for places to lock your bike

"Change is still slow partly because of budget and staff cuts," said Ragnhild Sorensen from Changing Cities. "But also because city officials have been planning for cars and not bikes for the last 70 years."

"A lot of politicians think that the car owners are the majority and are their voters,"  said Sorensen. "It is not like that anymore — not in the big cities." Changing Cities now has 15 initiatives across Germany working to support pedestrians and cyclists.

Back on Bergmannstrasse, Guillaume Berthot chats with customers in the wine shop he works in. Berthot says that after the weather and wine, complaints about the changes to the street are the main topics of conversation. Part of that is because people are often skeptical of change, still he thinks Berlin could learn from examples in France where many cities have pedestrian zones.

Berthot thinks the test phase lacked a proper vision of how the street would look in the end.

"It would be interesting if they did it in like France, where you have a lot of spaces in cities where there are no cars. It's green and it's really interesting to be able to chill and enjoy it,"  he said. "Because right now, you can't tell me it's nice to sit here with all those cars going by."

Berlin rents are rising at an eye-watering pace, and many blame greedy real estate firms for the situation. Activists have now proposed nationalizing housing companies. The idea is legal, novel, and highly controversial. (28.11.2018)

Can green pioneer Costa Rica get citizens on their bikes?

Costa Rica gets 98% of its power from renewables, yet has one of the biggest carbon footprints in Central America. Now, it wants to clean up transport, but can cycling improve its image? (21.05.2019)

The Norwegian capital plans to cut emissions by 95 percent by 2030, despite being one of Europe's fastest growing cities. As European Green Capital 2019, it hopes to set an example for others. (02.01.2019)