Living next door to tourism in Berlin

Berlin's popularity with tourists is growing, but so is local residents' resentment: noise, rubbish levels and prices are rising. Is the tourism boom backfiring? We assess the mood in Berlin's Kreuzberg district. 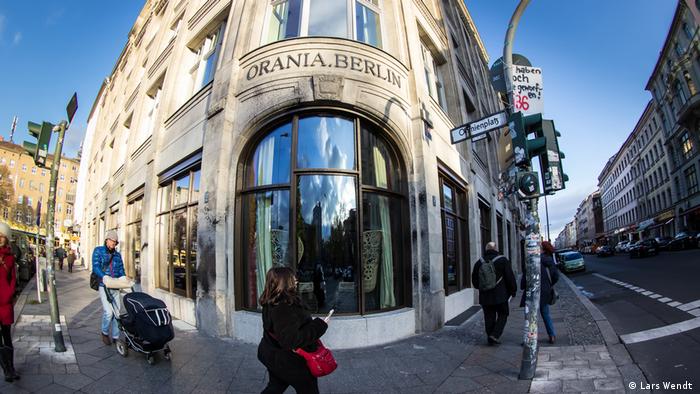 The new Orania Hotel sits in the middle of Kreuzberg like a docked cruise liner. It dropped anchor behind its historically listed sandstone façade in September. In front of the hotel lies the greenery of Oranienplatz square, on which refugees were still camping three years ago. The huge windows from German imperial times are a reminder of the building's original incarnation as a department store. After years lying vacant, it's now a hotel for well-heeled tourists that also features concerts. An overnight stay costs between 200 and 750 euros.

In an area better known as a bastion of the left-wing scene, the luxury hotel has met with incomprehension. "Why here, of all places?" a local woman grumbles. Others welcome the revitalization but remain skeptical: "The people with big money don't go to Kreuzberg. It'll torpedo itself." 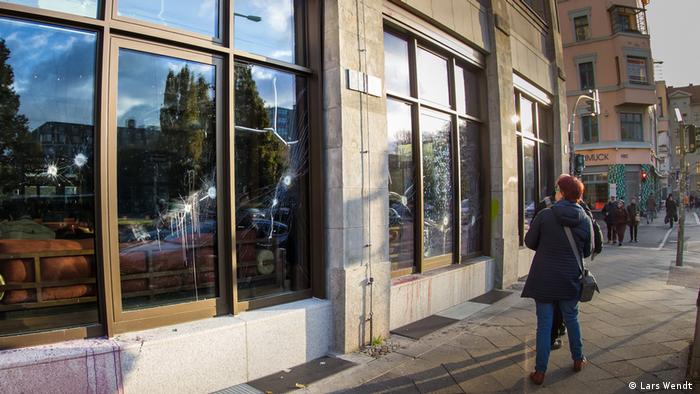 While the luxury hotel had already caused heated debate in the district before its opening, it soon became an object of hatred among radicals. The meter-high windows on the ground floor have been targeted with stones and baseball bats. Nonetheless, two dozen guests sit in the hotel bar and restaurant - with their backs to the window panes.

The thoughtlessness of partying tourists

If you walk down Oranienstrasse, you will still find some long-established shops, pubs and clubs, such as SO36, where the Dead Kennedys and other punk greats played in the 1980s. On this November evening the lights are on. Inside a wrestling event is taking place. Several audience members are standing outside the door, smoking. Four Spanish women walk past. They're looking for the location of the May Day riots and rave about the street as Berlin's most multicultural spot. 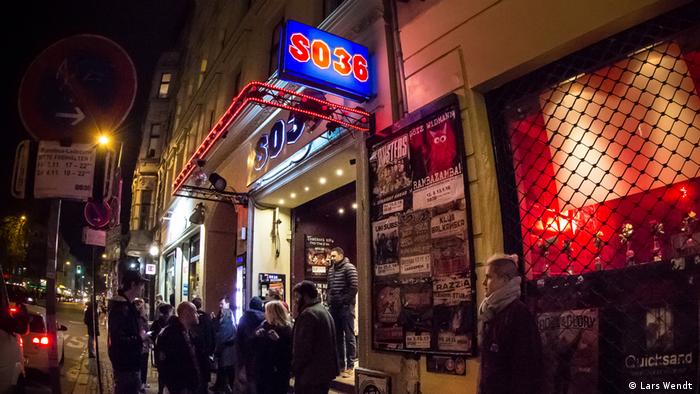 Otherwise, there are few tourists to see. It's a contrast to the usual crowds in the summer. "It's much fuller then. As an average consumer trying to get home from work, you can't even get through," Patricia, who sells yarn in the Fadeninsel, diagonally opposite SO36, tells us. The yarn shop has its own problems with partying tourists. "They leave bottles in the flower tubs. They sit out here on the window sill. Scraps of food, cigarette butts - everything ends up on the ground," says its owner Marita Tenberg. 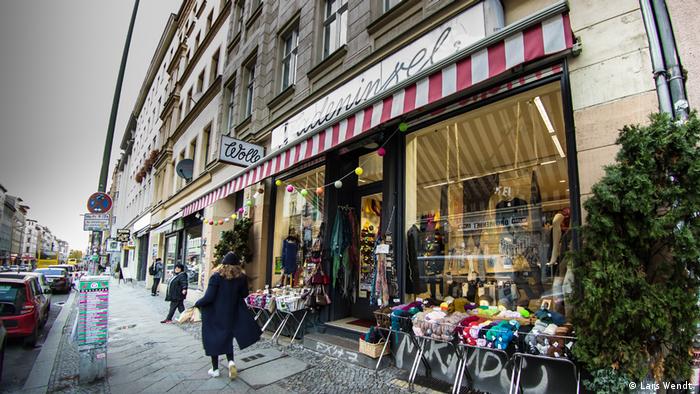 Right next door, Michael Wießler has run his comic book shop, Modern Graphics, since 1991. On its shelves are comic books and graphic novels in German and English, pop merchandise and indie books, Donald Duck next to a Berlin graphic biography of Nick Cave. This is how Wießler describes the attitude of tourists who come to party: "'So here we are in Kreuzberg. Let's tear up the town.' We used to have that with Berliners from other districts - if they even dared come here. But in the past twenty years the numbers have grown larger." He says there's not as much binge-drinking and mayhem as in parts of Friedrichshain or the Mitte district, but "the way has been paved."

While Wießler continues to work in his office, Astrid, a regular customer, is leafing through a manga. She gets especially annoyed at tourists when they buy their beer cheaply at the kiosk and then sit down in a pub with it. "The pub owners have to pay rent and their employees. I've spoken to tourists a several times about it." 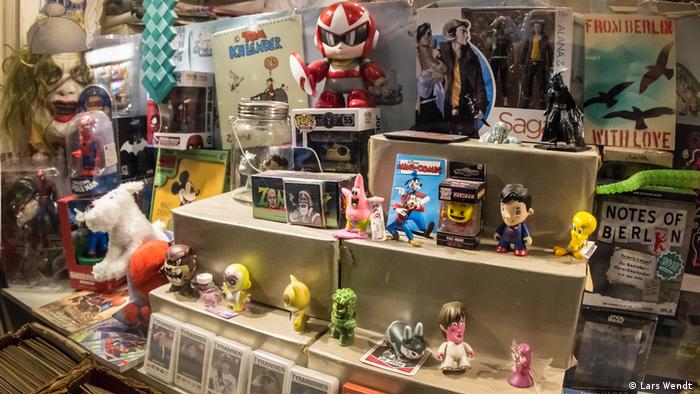 In 2014, the fact that increasing tourism had been causing conflict between residents and visitors for some time attracted the district council's attention. Since then there has been a law prohibiting the repurposing of residential housing, which means entire apartments can no longer be rented out as vacation homes without permission from the district. Despite that, the number of people in Berlin offering their apartments as vacation rentals on Airbnb continued to rise until 2016. Entire courtyard wings of apartment houses around Oranienstrasse were turned into holiday apartments, their tenants forced out.

Residents feel they've been left on their own. As one of them, Astrid says critically, "Here one shop after another is being turned into a restaurant or bar. More and more fast food places and snack bars are springing up on side streets that used to be relatively quiet. The kiosks that sell cheap alcohol, cigarettes and more around the clock put chairs outside their doors, although they're not restaurants. And the district doesn't stand up against it. It's the laissez-fair style at the district level here in Kreuzberg that angers me." 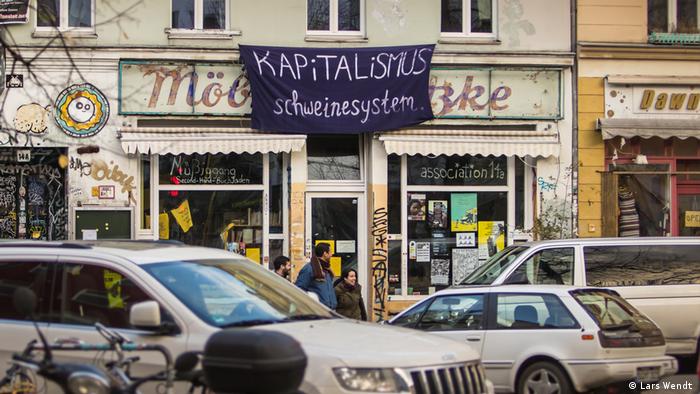 Michael Wießler from "Modern Graphics" confirms that Oranienstrasse has changed. "In 1991, when we opened here, there were lots more small shops." He views developments with skepticism. "When you look at the rise in commercial rents alone in this area - who can afford them?" Yet the street's diversity is what makes it attractive - to tourists as well.

Many here agree that tourists also bring advantages. Wießler's shop used to be frequented only by Berliners and graphic novel fans. For him as a businessman the onslaught of tourists is positive. "We definitely benefit from it." 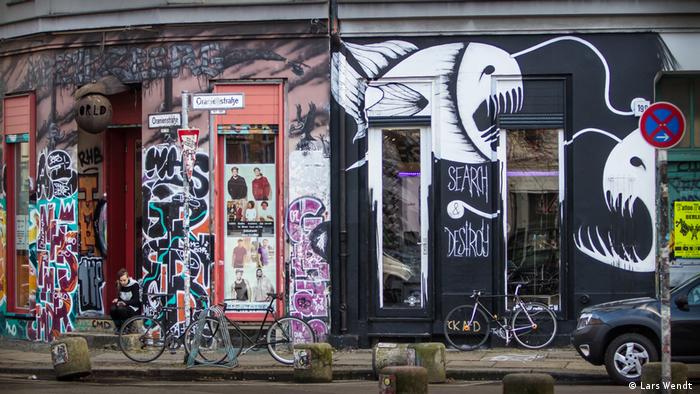 Local resident Astrid remembers: "Oranienstrasse was always a place to stroll, but there used to be only left-wingers and Turks. Nowadays the area is more colorful and relaxed - partly because of all the informally-clad tourists. You no longer get stupid propositions if you wear evening dress, a mini-skirt or high-heeled shoes."

Marita Tenberg from "Fadeninsel" also finds her tourists enjoyable. "But people who come to buy yarn are a very special clientele. They're often Danish tourists, but also from Asia and Australia."

According to a study by the city marketing agency visitBerlin, most residents of Friedrichshein-Kreuzberg don't feel disturbed or restricted by tourism, even though, at 66%, the approval rating is lower than in Berlin as a whole (85%). 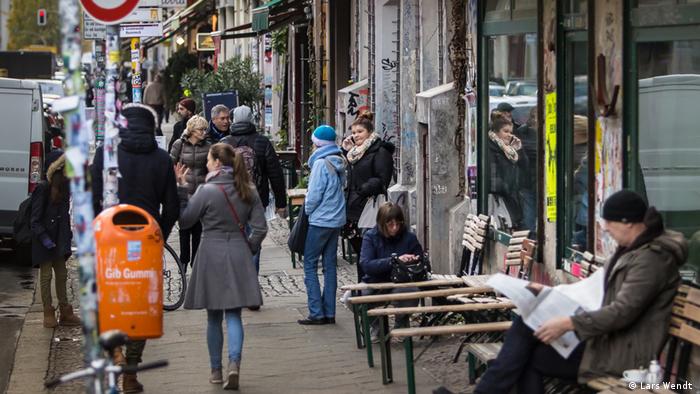 In 2017, visitBerlin anticipates overnight stays in the German capital to total 31 million. Over  the past few years, Berlin, with its wide range of cultural activities, rose to third most popular European city break destination - behind London and Paris. According to Tänzler, "Growth was very rapid. It's not surprising that it led to upheaval in certain places. But we're not exclusively a party city. Tourists who come to party are more noticeable and disturb residents the most." He says tourists are not necessarily the majority among the revellers. "According to those we asked on the Admiralbrücke bridge, a notorious party hotspot, in the summer, for instance, more than 50% came from other Berlin districts."

To make sure relations between locals and tourists don't deteriorate further, the new tourism concept which the city plans to present in 2018 aims to manage the flood of visitors more acceptably and counteract the developments that restrict quality of life. Even though it is clear that there are no quick fixes, visitBerlin spokesman Christian Tänzler says "We're working on finding a balance, together with residents, politicians and the tourism industry."

Whether in the process the mixture on Oranienstrasse so typical of Berlin can be maintained will set a benchmark for residents and tourists. Otherwise the next escalation in resentment against what is being called touristification might soon take place in the Friedrichshain-Kreuzberg district.

Berlin 24/7 How much tourism can Berlin stand?

Tourism in Berlin is booming. But not everybody is happy about it. Too many parties, too much waste, people groan. Nobody is shouting for a cutoff yet, but DW columnist Gero Schliess recommends prompt action. (22.10.2017)

Party tourists are not welcome

Last weekend, yet another anti-tourism demonstration took place in the city of Palma de Majorca. How much tourism is too much? DW talked to Torsten Kirstges, an expert on tourism, to learn more. (22.09.2017)

Citizens protest on Spanish island of Majorca against mass tourism

A citizens' protest against mass tourism on the Spanish holiday island of Majorca symbolically closed the tourism ministry. The island has had enough of drunken visitors and wants more sustainable forms of tourism. (31.07.2017)