The German capital's fame as a cyclist's paradise has attracted many rental bikes companies. And now electric scooters have joined this fast-paced business race. The fight for this new market has started. 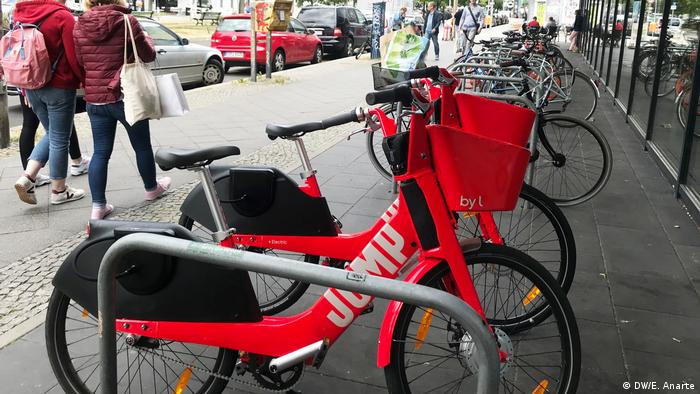 "When he woke up, the dinosaur was still there," Honduran writer Augusto Monterroso's most popular micro-story goes. In Berlin and other German cities, tons of rental bikes and electric scooters from different companies have joined the urban landscape in recent weeks.

"I suddenly see them all around, it feels like it happened overnight," Anna Böhm, a 23-year-old student living in Berlin, told DW. "E-scooters are really cool, and it's great to have so many options."

Yet the question, for investors and entrepreneurs, is whether this is more than a hype. Can it become a profitable business bet in the long run? When looking back in a couple of years, will e-scooters even still be there?

The rental bike and e-scooter race is at least promising. Big players like Lidl, Uber (with its Jump electric bike) or the Chinese bicycle sharing system Mobike are competing with the e-scooters released by startups like Berlin-based Tier or Lime, founded in San Mateo, California. Steven Fleming, founder of consultancy Cycle Space, believes that a "deficiency" in the way cities are planned and built has created an opportunity for bike share companies. "A lot of us don't use our bikes to go to the theatre, to the shopping center or to the workplace because we are afraid they will be stolen," he told DW. However, in his opinion, most people would actually prefer to be using their own bikes.

Many bike users seem to agree. "We have a safety issue with bikes, they get stolen too often," Carolin Kruse, from Neukölln's Bike-friendly Network, told DW. "I must say I'm starting to notice some sort of cultural change. I see many more people biking than before."

Nonetheless, it's very unlikely that all the providers will end up getting a piece of the cake. The battle for the market share has already started. And, according to Daniel Schellong, a consultant at BCG, "after a certain wave of consolidation there's going to be only two or three winners, maybe four. Those are the ones that will stay."

Riding to the winning formula

There are things that seem to be obvious, when it comes to choosing what to ride: With an e-scooter one cannot carry groceries the same way as on a bike, but it might be better for those who want to avoid arriving sweaty. But beyond pragmatical questions, what are the key factors to secure market leadership in such an environment?

"Optimize operations, bolster product durability, forge a strategy for rapid growth and beef up funding," Schellong outlined. Together with this, he added, "cooperation with cities, regulators and public transport authorities" is also essential. 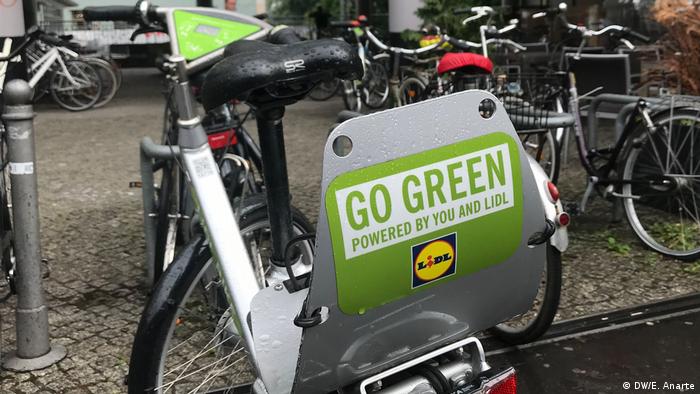 But they also need to address the concerns that surround these micro-mobility alternatives, such as safety. E-scooters can be dangerous to both riders and pedestrians. In Spain, for example, the regulation of these systems was toughened some months ago after a series of deaths. Last week a well-known YouTuber was killed while riding an electric scooter around a London roundabout.

For Fleming, however, we need to take a look at the broader picture. "Yes, e-scooters can be very dangerous, since the users don't wear helmets and the wheels are very small." But for him this means we have to rethink cities and public spaces. He is convinced that if cars were not taking that much space, these accidents would scarcely happen. "So the real answer is to put e-bikes and e-scooters in the middle of the road and take the cars outside the city."

Our moves are information — and money

But there's also a further concern regarding privacy and personal data. "If you look at the ownership of some of these companies, there's often a big data firm among their shareholders," Fleming underlined. He thinks companies might be hoping to make money from the data they're gathering from individuals by tracking their moves when using these bikes or scooters. "Two places where these bikes have been most widely accepted are China, which is a surveillance society, and Singapore, which is one as well."

"I'm not in those boardrooms to know," he said, "but it's reasonable to speculate that the value of the data is part of the business plan of a lot of these companies."

By contrast, Schellong believes this should not be a large concern if these firms follow the same laws as everyone else. "In Germany we have data protection laws that prevent providers from using personal data," he said. 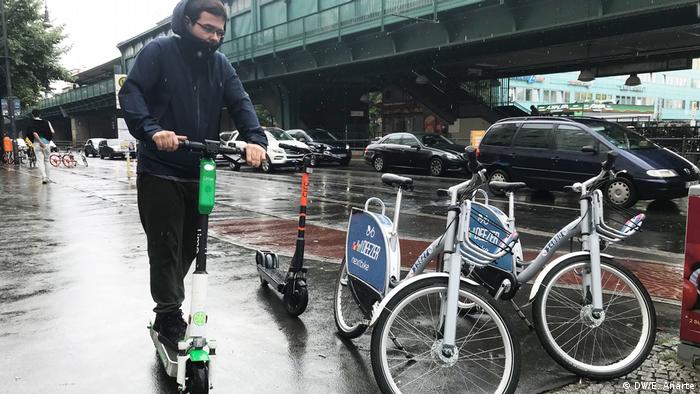 Even the rain won't stop some from taking an e-scooter

Companies will have to take all these factors and concerns into account in order to place their brands in a market where the offer is hard to differentiate. Marketing and promotional discounts will therefore be decisive in their success, the researchers from the BCG highlighted. Competition on price, turf and e-scooter availability will also play a decisive role.

Schellong is convinced that, just like on the American West Coast, people in Germany and Europe will soon get used to e-scooters and rental bikes and will end up integrating them into the urban ecosystem. More changes in terms of regulation will also come. "For instance, in Los Angeles you cannot drive them close to the beach area because there are many pedestrians," he added.

Consequently, this German expert stands up for giving these services a chance, considering both their promises and pitfalls. "We should try to use them to create greener cities." In his opinion, they can play a part in the broader urban transport planning. "We should be open for the change."

They already motor through the United States and many European countries. Soon, they will also be a common sight on Germany's streets. Are we seeing an important shift away from the car in terms of transport policy? (17.05.2019)