Berlin Food Week just kicked off, offering visitors cooking demonstrations, lectures and food markets. It's proof of Berlin's food craze and the fact that its culinary scene is catching up with the rest of the world. 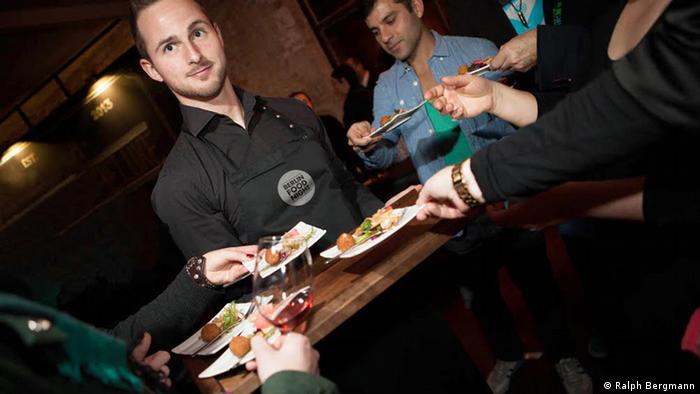 It's a common complaint among those who move to Berlin that they've come a few years too late: too late to the party Berlin was known for in the early 90s; too late for the extremely low rents that could be found as the city rebuilt itself after reunification; too late to catch the real bohemian vibe before all the expats, techies, and Prenzlauer Berg parents swept in and gentrification kicked in.

But as someone who cares about food - and by that I mean really delicious and diverse food - coming to Berlin a few years ago was just the right time.

When Cathrin Brandes, a culinary consultant and supper club host, moved to Berlin in the early 90s, just a few years after the fall of the Berlin Wall and Germany's reunification, the food scene was bleak. She says back then, the restaurants in the West were traditional and conservative, while today's hub of Mitte was completely empty.

But thanks to tourism, a growing startup scene, and a handful of restaurants that paved the way, Berlin's food scene began to grow. 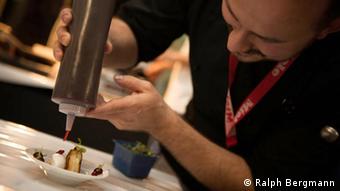 It was just that startup vibe and its built-in base of techies and food lovers that caused Jörn Gutowski to pick Berlin as the home base for his own food-related startup. TRY FOODS offers single-ingredient tasting sets, which explain the history of just one single product.

When Gutowski moved to Berlin in 2003, he witnessed the same culinary wasteland Brandes describes, with no restaurant options in his neighborhood of Friedrichshain.

"People didn't go out to eat but they ate to go out," he says. "Eating was something you had to do beforehand, to get a basis for your drinking."

In Berlin, food is the new party

Today, this party focus seems to have shifted to food being the center of attention.

"There was always a lot of innovation in Berlin when it comes to nightlife," says Gutowski. "But those innovative drivers are getting older now and people are putting more emphasis on food."

A perfect example for this is the Neue Heimat Berlin Village Market in the district of Friedrichshain. The owners of the market ran the popular techno club Bar 25 for nearly a decade, but now their focus has shifted on food and they organize a weekly street food market, bringing together food stalls of ethnics eats and creative concepts, as well as pop-up events.

In many ways, these food events are also catering to the hoards of young people that still come to Berlin looking for its infamous nightlife. "These events have a communal aspect," says Gutowski. "It's more important for people in a city like Berlin to have a feeling that you are in a place with like-minded people." 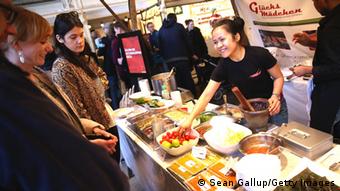 And the Village Market is just the latest in a string of street food markets that have popped up all over Berlin throughout the last years.

Kavita Meelu, a British-Indian expat, was looking for the kind of creativity in Berlin's food scene that she had found back at home in London. And so she helped get a weekly event up and running: Markthalle Neun's Street Food Thursday, which brings together many of the entrepreneurial cooks and expats looking for a place to showcase their cuisines and creativity.

Not long after Street Food Thursday started in 2012, Bite Club launched, a street food market featuring DJs and cocktails. The Spree River-side location just outside of the Arena night club adds a bit more party atmosphere to the market concept. 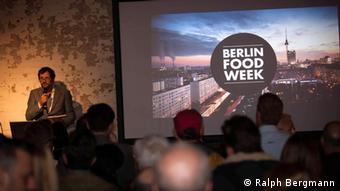 In many ways, the street food markets that are currently dominating Berlin are simply mimicking food fairs like Smorgasburg, the weekend meet-up of food vendors that I used to go to back in Brooklyn. But the city is also starting to set its own trends.

While some food entrepreneurs are clearly looking outward, some are looking inward instead, picking up on the interest in artisanal and traditional production and German-made goods.

All over the city you can find shops focusing on regional products, like Fritz Blomeyer, a cheese monger who only sells German cheese, or Culinary Misfits, a store selling "seconds," misshapen or unsightly produce from organic regional farmers.

This focus on regional products could be fully experience at this month's Stadt Land Food, a four day festival that took over Kreuzberg's Markthalle Neun with tastings, lectures, cooking demonstrations, and pop-up dinners, all focused on the city's agriculture and artisanal food scene.

Crowds spilled onto the street and could sample everything from local sausages and cheeses to Berlin-brewed beer and freshly roasted coffee. The festival also included the first annual Berlin Street Food Awards, food film screenings, and cheese and bread making workshops.

And an interest in regional cuisine isn't all that's currently happening in Berlin's food scene. There is also a growing appreciation for the traditional.

"You see more and more traditional types of recipes, names, and food that producers are using. 10 years ago no one would have done that, no one would have thought that was okay,” says Gutowski, who recently canvased the Berlin food trend scene for a booklet to accompany his upcoming Berlin tasting set, which will premier during Berlin Food Week.

Although most people would agree that Berlin certainly has momentum, the city is currently still playing catch-up when it comes to food. And because Berlin isn't home to a large, wealthy population willing to spend big bucks on fine dining like in other larger cosmopolitan cities, it will continue to do so, and develop its lower end - albeit trendy - food scene for some time.

And as Gutowski rightly puts its, the food scene in Berlin really mimics the cityscape of Germany's capital. Berlin does not have the impressive skyline of New York City, nor can you easily pinpoint a few places that will provide a great sense of its food world.

"To completely appreciate Berlin, you need to go into the courtyards, you have to spend some time here" Gutowski says. "And that's the same with the food scene. There are a lot of pop ups and temporary places, a lot is happening, but you have to look for it."

A recipe for peace in the Middle East

Berlin resident Ciska Jansen created a brand-new cooking class that aims to connect young adults from Israel, Palestine and Germany by focusing on similarities - like food - rather than political difference. (30.09.2014)