With Germany's global profile on the rise, its bid for a nonpermanent UN Security Council seat was well received in New York. But a reported deal that would guarantee a seat for Israel has cast a shadow over the effort. 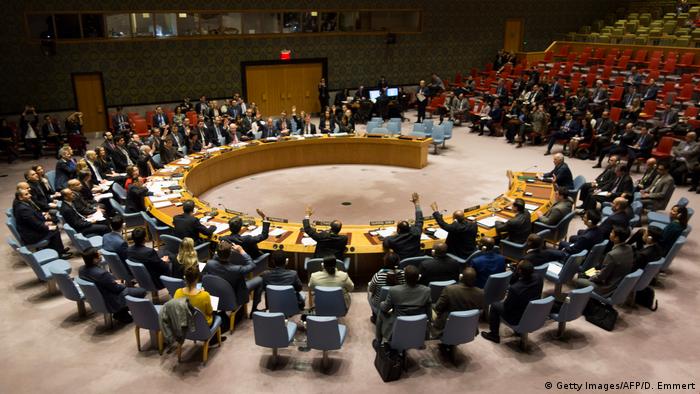 He praised the UN headquarters in New York's Turtle Bay neighborhood as "a special place" that is "where the world meets." He hosted a dinner for representatives of small Caribbean and Pacific islands at Germany's UN mission, outlining Berlin's goal to combat climate change — a key issue facing those nations.

Maas highlighted the fact that Germany is one of the UN's biggest contributors. He also expressed gratitude for the trust that he said had been given to Germany at the UN, describing the candidacy for a rotating Security Council seat as a way to try to give back.

"We are shouldering responsibility already, and we are prepared to shoulder responsibility in the future," Maas said in New York. "And we show this through our candidacy for a nonpermanent seat for the UN Security Council 2019 and 2020." 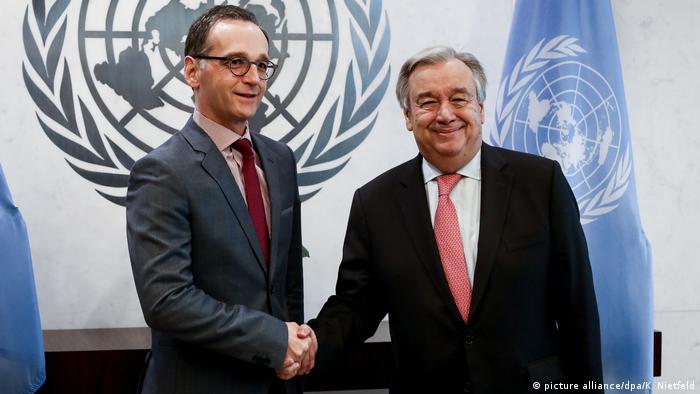 Maas took two thinly veiled swipes at a US president who has repeatedly lashed out the UN.

"We live in a time where we need more United Nations and not less as some may think," Maas said. He noted that it was important to allow reason to prevail in discussions at the UN during what he called "the age of fake news."

Maas also spoke at the UN Security Council about Germany's commitment to peacekeeping, and met representatives of the African Group, UN Secretary-General Antonio Guterres and US Ambassador to the UN Nikki Haley. He capped off his New York trip by meeting with leaders of US Jewish organizations.

Support for a bigger role

Germany's long-established track record as a highly engaged UN member coupled with the Berlin's being increasingly perceived as something of a counterweight to the Trump administration has led to support for a larger international role for the country in New York.

"Its last membership was productive," Michael Doyle, a former UN assistant secretary-general and the current director of Columbia University's Global Policy Initiative, told DW in an email. "And Chancellor Merkel is the only statesperson who is a credible candidate for the role of 'leader of the Free World.'"

"Berlin has been a stalwart leader in Europe and is increasingly visible on the world stage," noted Michael John Williams, a professor and director of New York University's international relations program.

"I'd say prospects for Germany are pretty good," predicted Richard Boucher, a Brown University scholar and former US ambassador who was the longest serving spokesman in the history of the US State Department.

"Countries are looking to find a 'Western' representative who can counterbalance Trump," he said.

Though Germany enjoys broad support for its increased global role, a recently surfaced issue has led to questions about its Security Council bid. The issue was raised in a tweet by Richard Grenell, the Trump administration's designated ambassador to Germany, who claimed that a deal was cut some 20 years ago for Israel to run unopposed in 2018 as part of the UN's Western European and Others Group (WEOG).

Grenell stated that Richard Holbrooke, the deceased former US ambassador to Germany and the UN, orchestrated the agreement. Germany is currently one of three countries campaigning for two rotating Security Council seats from the WEOG region. Belgium and Israel are each also vying for a seat, which Israel has never held. Israel became part of WEOG in 2000.

Asked about accusations that Germany's bid violated an agreement allegedly made by WEOG members that would have allowed Israel to run unchallenged for a seat, Foreign Minister Maas said it had always been practice that there have been different candidacies.

"We are not campaigning against anyone," he said. "We are a candidate for a seat for the UN Security Council. We are doing this every eight years, and this has always been the case, and that's what we have agreed."

Asked whether he was aware of a noncompete deal, Michael Doyle, the former No. 3 UN official, said he was not. But he added that discussions about such a deal could complicate Germany's bid, especially because Israel had never been on the council before.

"Thus, competing may come with a great deal of adverse publicity and will almost certainly ignite a US presidential tweet storm," Doyle wrote. "Germany might want to reconsider and wait two years," he noted. Queried about his two picks for the two available WEOG seats, Doyle named Israel and Germany.

Recollection of an agreement

Suzanne Nossel, a former top aide to Holbrooke who has also held several other high-ranking State Department positions in the Obama and Clinton administrations, said a deal had been made. 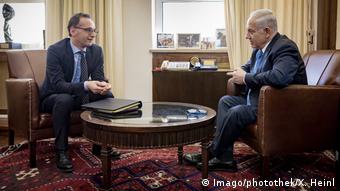 "While I did not work on this specific issue on Holbrooke's staff, my understanding is that the agreement to allow Israel into the WEOG included an understanding that they would not be part of the Security Council rotation for a long initial period and would then run unopposed as a WEOG candidate in 2018, because it was recognized at the time that it would be difficult, if not impossible, for Israel to garner more votes than another WEOG member," Nossel told DW in an email.

Nossel said that, in order to not only rely on decades-old recollections, diplomatic cables that were exchanged by WEOG members at the time could be consulted to clarify whether there was, in fact, such an agreement and how firm it was.

"While recollections are not enough if the existence of an agreement can be substantiated, it should be honored so that the viability of future long-range diplomatic accords is not undermined," Nossel added.

The election for the two reserved WEOG seats is scheduled for June 8.