Germany has urged caution on the Palestinian drive for full membership in the UN, emphasizing instead the importance of resuming negotiations with Israel. The EU, meanwhile, is struggling to adopt a common position. 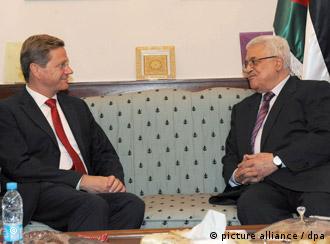 Westerwelle is reportedly not keen on Palestine's proposal

German Foreign Minister Guido Westerwelle has reacted coolly to the Palestinian Authority's bid to win full membership in the United Nations this month, saying instead that he supported direct negotiations between Israel and Palestine.

"Germany's position, like a number of other European Union countries, is not positive," Malki told the Voice of Palestine radio.

Westerwelle, currently on a three-day Mideast tour, met with Abbas in the Jordanian capital of Amman on Sunday. The Jordanian Royal court subsequently issued a statement emphasizing the significance of Europe's role in resolving the Israeli-Palestinian conflict.

"Germany and Europe have an important role to play in backing efforts that seek to re-establish comprehensive peace in the region in the run-up for the creation of an independent Palestinian state within the 1967 borders in accordance with the two-state vision," the statement said. 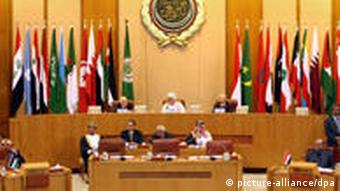 The European Union, however, has run into difficulty formulating a single position on the Palestinian bid among its 27 member states. While states such as Germany have been skeptical, France has been supportive of the initiative.

Although EU foreign policy chief Catherine Ashton said the bloc will not have definitive position until a proposal has been presented, she said Palestinians and Israelis must resume talks.

"What's very clear…from the European Union is that the way forward is negotiations," Ashton said in Cairo on Monday.

The Arab League, meanwhile, has agreed to help mobilize support for a Palestinian bid to join the UN. The organization's chief Nabil al-Arabi said "communications and consultations will continue in order to reach the goal" of Palestinian membership.

Palestine currently has "observer" status at the UN. Full-fledged membership requires a recommendation from the Security Council and support from two-thirds of the General Assembly. The US has already said it will veto the Palestinian proposal.

If full-fledged membership fails, Palestine can apply for non-member status, which requires a straight majority in the General Assembly.

The Palestinian Authority is busy finalizing its strategy for statehood ahead of the UN General Assembly in September. The UN Security Council, meanwhile, is already starting to debate the prospect. (26.07.2011)

Fresh from a surprise stop in Libya, Germany's foreign and development ministers spend a day in Israel and the Palestinian Territories, where they have warned that unilateralism could endanger the peace process. (14.06.2011)

Berlin to call on Palestinians to drop UN resolution on independence

Berlin wants the Palestinians to stick to stalled negotiations with Israel over a two-state solution and abandon a plan to seek recognition as an independent state from the UN. (13.06.2011)