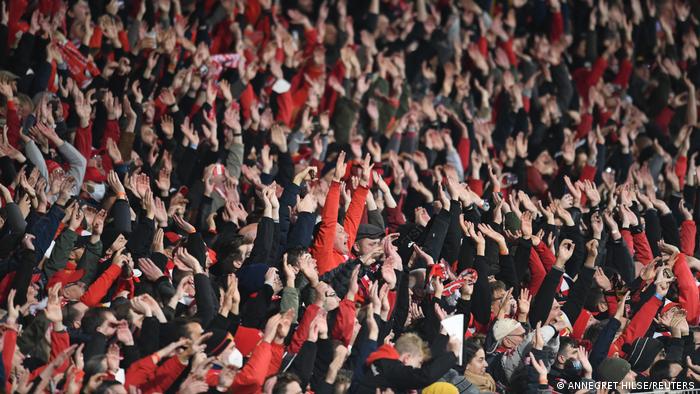 As excited fans make their way out of the station, chatting and sipping beer on their way to the Stadion an der Alten Försterei, everything seems normal.

A sold-out Berlin Derby under the lights on a Saturday night. What more could you want?

But the situation is anything but normal. Germany finds itself in the grip of a fourth wave of coronavirus infections, the country is reporting new record numbers of infections on a daily basis and intensive care units are filling up.

Only one day earlier, the federal states of Bavaria and Saxony announced partial lockdowns to come into effect next week.

And in Berlin? Thousands are gathered at the turnstiles, packed together like sardines. Hosts Union requested permission from the state senate to stage the derby in front of a capacity crowd, and the politicians acquiesced. 22,012 tickets have been sold, and the fans are determined to get into the stadium on time.

"We're sticking to all the regulations," assures Union spokesman Christian Arbeit, and the home fans seem comfortable "We feel safe," says one. "Otherwise, we wouldn't be here."

Union are operating a so-called "2G" system, meaning that ticket holders have to provide proof that they are either vaccinated against ("geimpft") or have recovered from ("genesen") COVID-19. Furthermore, the club have "requested" that fans test themselves as well, and "recommend" that masks are worn at all times, as Arbeit reminds them over the PA system.

There's no alcohol on sale either, although this has more to do with the categorization of the derby as a "high risk fixture," despite Hertha's hardcore ultras boycotting games due to the restrictions, and their Union counterparts not officially attending as a group.

As for those who are in attendance, however, the rules, regulations and requests are quickly forgotten once Taiwo Awoniyi pounces on an error by Hertha defender Marton Dardai to give Union the lead. Plastic cups fly through the air and the fans fall into each other's arms on the standing terraces which make up over 80% of the stadium.

When Christopher Trimmel doubles the lead with a volley into the bottom corner, the euphoria only increases. And why not? Union, the underdogs from the former East Berlin who were only promoted to the Bundesliga for the first time in 2019, are dominating Hertha, their established local rivals.

The songs and chants echo around the stadium. After three "ghost" derbies behind closed doors, it's understandable that the clubs and the supporters want to live out their rivalry and their fan culture under normal conditions. And it feels normal. But it's really not, neither in a football sense nor within the context of the pandemic.

Statistically, the danger of infection for vaccinated and recovered people in a football stadium might be low, and professional football may take place outdoors. But when juxtaposed against packed hospitals and exhausted medical personal, what is real quickly becomes surreal.

"We have to remain optimistic," insists spokesman Arbeit. "We have to do our best to stage events securely and in accordance with the regulations." 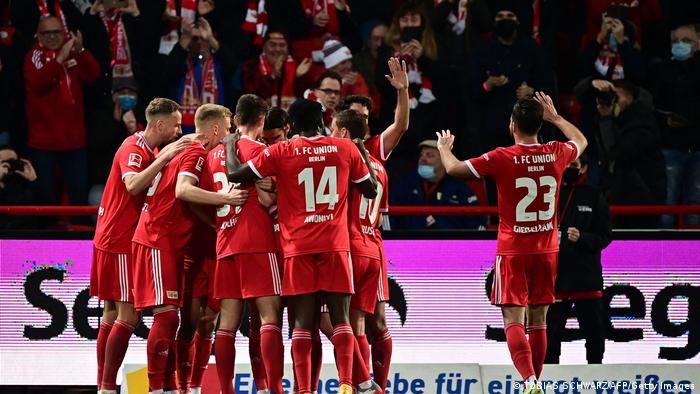 And indeed, Union have pushed harder than most to allow fans back as quick as possible.

The atmosphere at the Stadion an der Alten Försterei is sacred to the club and its supporters. The idea of playing without fans would be a nightmare at the best of times, but even more so when the club is at an historic high in the Bundesliga and even competing in the UEFA Conference League.

But not only do "ghost games" leave Union bereft of their famous fan culture, they also hit the club's bottom line. What's more, with the stadium consisting predominantly of terracing with only a small number of seats, reduced capacities with clearly defined social distancing measures are difficult to implement.

But how long will Union and other German clubs be able to continue under such conditions? Many experts are describing the current pandemic situation as worse than previous waves, despite Germany having vaccinated almost 70% of its population. Lothar Wieler, the president of the Robert Koch Institute for disease control, has already called for large-scale public events to be canceled altogether.

In neighboring Austria and the Netherlands, professional football is already taking place behind closed doors again. In the eastern German state of Saxony, Bundesliga side RB Leipzig will also play their next few home games in an empty stadium.

"We're sticking to all the recommendations and we're doing it very well," said Union head coach Urs Fischer at full-time, as his victorious players did a lap of honor. "But ultimately we'll have to accept whatever the politicians decide."

None of that will have interested Union's supporters. "City champions! Berlin's number one!" they chanted, bouncing up and down in unison. Hardly any of them wearing a mask. It all felt ominously normal.