German Foreign Minister Guido Westerwelle has called on the Israeli government to freeze its settlement program and support a two-state solution with the Palestinians. 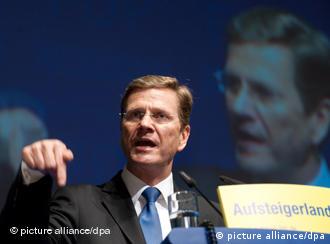 In an interview on Deutschlandfunk national radio Westerwelle said, "Germany is convinced that the settlement program must be frozen. This is not just Germany's stance, but of the European Union and the entire international community."

He also stated that a two-state solution for Israelis and Palestinians is advocated not only by Germany, but also by the rest of the EU and the United States. 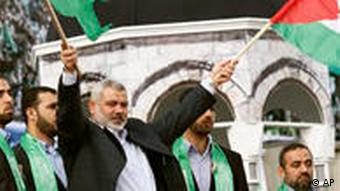 Goerzig says engaging Hamas could be good leverage with Israel

When asked about an appropriate time for the EU to increase its pressure on Israel, Westerwelle said it would be best to first see what results come from last week's Middle East quartet talks in Moscow between the EU, the US, Russia, and the United Nations.

EU foreign ministers universally condemned Israeli policies at a meeting on Monday in Brussels, but remained at odds on how to put more pressure on the country. The EU is Israel's largest trading partner, and the bloc has so far declined to impose trade sanctions.

But Carolin Goerzig, an analyst at the European Union Institute for Security Studies in Paris, told Deutsche Welle that if the EU wants to increase its leverage on Israel in order to stop the building of further settlements, the bloc should engage greater discussion with Hamas.

"So far the little pressure that has been exerted on Israel has not proven fruitful really, and at the same time going to the other extreme could also backfire," said Goerzig. "So what could really pressure Israel is a moderation of Hamas, because then Israel would have to show face and react."

Goerzig added that the conditions set out by the quartet for a Palestinian government, which include the renunciation of violence, the recognition of Israel's right to exist, and a commitment to all agreements signed by the Palestine Liberation Organization and Israel, do not encourage Hamas to come to the negotiating table. 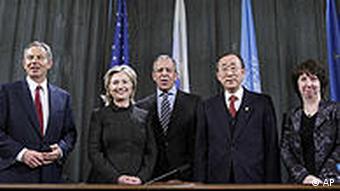 The EU has been looking to increase its international presence

"I'm not saying we should recognize Hamas as a negotiation partner right away, but it has never been stated what they would gain from agreeing to these quartet conditions," said Goerzig. "Hamas has shown some steps of moderation, but the EU has never reacted positively, so Hamas always stands to lose without any benefits if it becomes more moderate."

The issue of Israeli settlements is in some ways testing the EU's - and Germany's - international role. But Goerzig says the EU's presence in the quartet was not as strong as it could have been.

"The EU has been shy about asserting itself in the quartet, which could be related to its lack of coherence," said Goerzig. "There is a need for debate on this issue in the EU, and I think Germany could drive such a debate."

The EU foreign policy chief Catherine Ashton said recently she will push for the launch of "proximity" talks between the Israelis and the Palestinians as a prologue to formal negotiations.

EU to step up pressure on Israel over settlements

European foreign ministers meeting in Brussels have strongly criticized Israel's intention of building further settlements in East Jerusalem. They called for an immediate stop urging Israel to get back to negotiations. (22.03.2010)

The Middle East diplomatic quartet met in Moscow on Friday to weigh the options on how to get stalled peace talks between Israelis and Palestinians back on track. But experts say it may be time to change tactics. (19.03.2010)

Germany has criticized an Israeli decision to build 1,600 Jewish homes on occupied land arguing that it could hinder planned peace talks. The plan has also been condemned by the European Union. (10.03.2010)