One year after the Berlin Christmas market attack, German politicians have said more must be done to offer assistance to victims following a terrorist incident. What should that support look like?

On the one-year anniversary of the Berlin Christmas market attack, in which 12 people were killed, Justice Minister Heiko Maas has said the German government "was not sufficiently prepared for the consequences of such a terrorist attack for those affected."

"For this we can only apologize to the victims and surviving relatives. It remains a never-ending task of politics in a democratic constitutional state to learn from mistakes and to assume our responsibility towards the victims of terror," Maas wrote in an op-ed in the Tuesday edition of the Tagesspiegel newspaper.

At a private ceremony for the bereaved and emergency workers on Tuesday, President Frank-Walter Steinmeier said there had been some failings in providing support and comfort to victims' relatives: "It is true that some support came late and remained unsatisfactory," Steinmeier said. "Many family members and injured, many of you felt abandoned by the state."

German Chancellor Angela Merkel vowed that Germany would learn from the experience over how to deal with the relatives of victims. Speaking after the ceremony, Merkel said that she and entire federal government would heed the lessons and "do everything humanly possible to not just improve security, but to help those whose lives have been affected or destroyed."

Mayor Michael Müller unveiled a memorial for the victims outside the city's Kaiser Wilhelm Memorial Church. The 17-meter-long line of bronze in the ground symbolizes the wound the attack left behind in the lives of the friends and families of the victims. The names of the victims have been engraved in the steps of the church. On Tuesday evening, at the exact time of the attack a year ago, church bells are to chime for 12 minutes.

A few hours later, Amri drove the truck into the Christmas market at Berlin's Breitscheidplatz, killing 11 people and injuring 56. He managed to escape and was shot dead by Italian police on December 23 after an altercation with officers outside Milan's Sesto San Giovanni train station.

In his article, Maas proposed setting up a coordination office in a government ministry so that any victims of future attacks would immediately have a contact person at federal level, and called for the law to be changed so that all victims of terrorist attacks could be treated and compensated equally, no matter their nationality or the weapons used.

Commissioner for the victims

Ahead of the anniversary, DW spoke with Kurt Beck, the government's official commissioner for the victims of the attack, who brought up similar concerns. 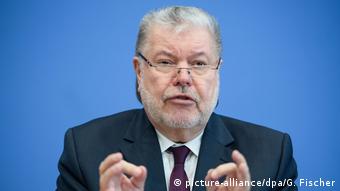 DW: There has been a lot of criticism over how the government handled the situation after the attack on Berlin's Breitscheidplatz Christmas market on December 19, 2016. Is that criticism fair?

Kurt Beck: We all said that of course, attacks like those in France could happen in Germany, too ­— but we weren't really prepared. I believe that in turn led an error of judgment. [Then-President] Joachim Gauck spoke to the victims' families, but the chancellor didn't, and the relatives see that as a considerable deficiency.

Why didn't Chancellor Angela Merkel speak to them?

I believe she thought that since the president spoke to them, she didn't want to top that — at least that's what she told me. She meant it in good faith, but she misjudged the situation.

The sentiment in France after the 2015 Paris attacks was, as a French official reportedly put it, that they were victims of "an attack on the French nation." Is that something we Germans simply don't have the knack for?

We first had to realize that our society was under attack, our culture, and that people actually lost their lives as a consequence. And that we have to deal with such a situation together. We have now come to that realization, but at first it was not as developed.

The authorities plan to engage with the relatives of victims in a different way in the future. What needs to be put in place?

First, there must be someone people can turn to at the immediate site of an incident. In Berlin, people milled about and couldn't find anyone to tell them what to do. Secondly, there needs to be a permanent contact that takes care of people. And thirdly, I believe we need to significantly change the legal foundations, we need hardship funds to foot larger benefits.

In addition, we need to correct the Crime Victims Compensation Act, which is aimed at Germans and members of EU states, but not foreigners from non-EU member states. Everyone should be treated the same.

Legislation, regulations ­— that sounds quite "German." But how must attitudes change?

Well, if I don't have the legal basis to give the people financial support, empathy alone won't do much good, either, and would be insufficient. We must also approach the people. I visited the victims' families at home, spoke to them and gave them the opportunity to pour out their grief, their horror, their anger ­— "how could something like that even happen?" — and I believe that we must keep that up while at the same time, we must give people material support wherever possible.

Kurt Beck is the former state premier of Rhineland-Palatinate. In March, he was appointed the government's official commissioner for the victims of the Berlin Christmas market attack, which killed 12 people and injured dozens more.

Shortly before the anniversary of the 2016 Berlin terror attack, Chancellor Angela Merkel has paid a surprise visit to Breitscheidtplatz's Christmas market. Survivors recently criticized Merkel's handling of the attack. (12.12.2017)