Interior Minister de Maiziere said Syrians would likely see their protections and rights curbed in the wake of the refugee crisis. But Berlin later denied that any changes were actually in the works. 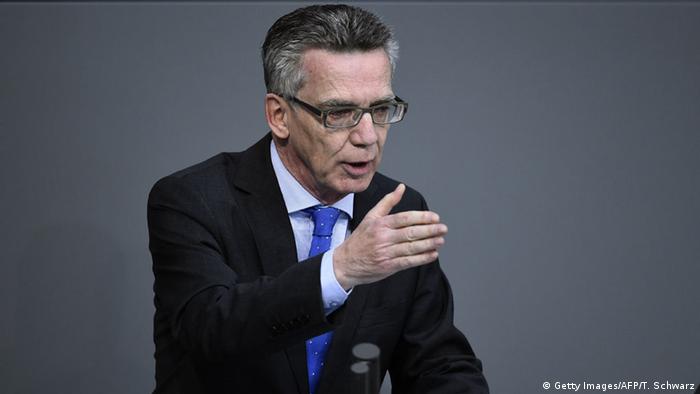 German Interior Minister Thomas de Maiziere was forced to backtrack on Friday night about changes to the status of Syrians fleeing to Germany. Mere hours after he said in an interview with Deutschlandradio that in the future, "for a limited time" Syrians would be given "subsidiary protection," but not full refugee status, de Maiziere publically corrected himself by saying "for now, things will stay as they have been."

The minister's initial comments thickened the air of confusion that has surrounded the German government's policy concerning refugees for weeks. German cities and municipalities are scrambling to cope with the number of people seeking asylum in the country. The federal government has said it expects 800,000 asylum applications this year, but other experts have estimated that over 1 million people could look for refuge in Germany this year.

Syrians represent the largest group of people who have fled to Germany, seeking protection from the ongoing civil war in their home country. Some 244,000 Syrians have applied for asylum in Germany so far this year.

Plan to give Syrians 'subsidiary status'

De Maiziere had told the German public radio broadcaster, "What we will do in the future with the Syrians ... is we will say to them: you will be given protection, but only what we call 'subsidiary protection,' meaning it is for a limited time, and without family reunification."

German Chancellor Angela Merkel and de Maiziere's Christian Democrats (CDU) had already struck a deal with coalition partners the Social Democrats (SPD) on Thursday that asylum seekers with "subsidiary status" would not be able to bring family members to live in Germany for at least two years.

Up until now, however, Syrians being granted "subsidiary" protection has been a very rare occurrence. According to the Federal Office for Migration and Refugees (BAMF), of the 55,600 asylum applications received by Syrians in August, only 53 were given this lower protection status.

By Friday evening, de Maiziere had already gone back on his morning statements - saying "at the beginning of the week, we had planned on implementing these changes."

But there are still "things that need to be discussed," he added.

For Merkel's part, her spokesman, Steffen Seibert, assured the public that no changes to the rights of Syrian refugees had been made. Germany is "sticking to the practice currently in place," he said on Twitter.

As the situation for refugees in the Balkans worsens, German volunteers are going the extra mile - literally - to deliver supplies. Groups are driving thousands of kilometers, sometimes covertly, to reach eastern Europe. (06.11.2015)

Tempelhof airport has already been repurposed as a refugee shelter for the thousands arriving in the German capital. Now a proposal to build shelters on the airfield has raised suspicions among local campaigners. (05.11.2015)

India: Thieves arrested for using monkeys in robberies 3h ago

Turkey's Erdogan voices support for Ukraine amid crisis 8h ago