Tempelhof airport has already been repurposed as a refugee shelter for the thousands arriving in the German capital. Now a proposal to build shelters on the airfield has raised suspicions among local campaigners. 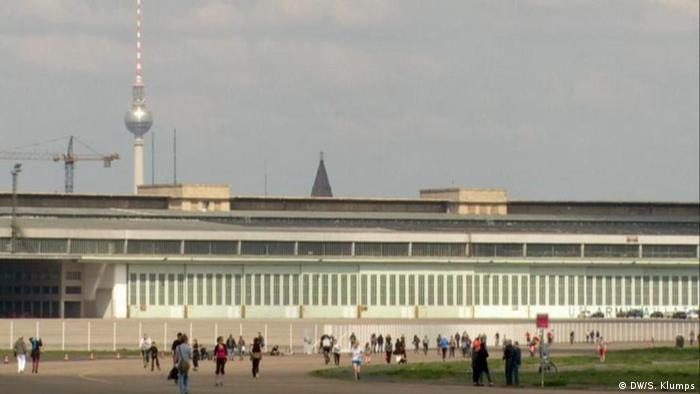 It was a Nazi building project, the scene of the Soviet-Union-defying Berlin Air Lift, a festival and fashion show venue, and one of the sets for the new "Hunger Games" film, but Berlin's Tempelhof Airport is now being put to yet another use. It is on the way to becoming Germany's biggest refugee shelter.

Over 600 refugees are already sleeping on camp beds in Hangar 1 of the historic airport, with Hangars 3 and 4 being converted to house around 800 each. The airport will potentially have a capacity to hold around 2,300 refugees, which, given that several hundred are reportedly arriving in the German capital every day, is likely to be necessary at some point.

Now, the Berlin city government may well go one stage further and begin building new shelters for refugees on the former airfield - defying a referendum that stopped apartment buildings being built around the edges of the much-loved public park that the field has become. In May 2014, some 740,000 Berliners (or 64 percent of those who took part in the plebiscite) voted to keep all 380 hectares of the green space free, scuppering the government's plans to allow property developers to encroach on its edges. Over 600 refugees have already been housed at the airport

According to a report in Thursday's edition of the "Berliner Morgenpost" newspaper, the new proposal, from Björn Böhning, head of the Berlin chancellery (the office of Mayor Michael Müller), would create an exception to the democratically-determined building ban for "reception centers, communal shelters, and other shelters for refugees and asylum seekers." But what has riled campaigners is that Böhning is proposing to build the new structures on the exact same 200-meter strip of land along one side of the park that had once been earmarked for development.

Berlin city government spokesman Bernhard Schodrowski was at pains to make clear that the government was only planning temporary shelters. "There are plans, because we want to prevent homelessness among refugees," he told DW. "So we want to make legal preparations for temporary buildings - nothing concrete, not buildings, stone-on-stone - installations to house refugees."

Felix Herzog, who was spokesman for the "100 percent Tempelhof" campaign that threw a spanner in the government's original plans, is more than suspicious of the proposed alteration of the law. "The government is using this emergency situation to soften the law on the Tempelhof field," he told DW. He pointed out there is a concrete space directly in front of the airport building that could be used for temporary shelters - and indeed would be better suited for the purpose. "There is a solid base there already, and getting water to the area they are suggesting would be very difficult," he said.

"I think to change the law after just a year and a half is a real insult to the whole system of having citizens involved in the democratic process," he said. "If they want to change the law, it has to be within a discussion process."

Berlin has been struggling to find enough public property to house its influx of refugees - well over 50,000 this year - and the mayor is already tinkering with local laws to make it easier for him to act unilaterally. This includes a proposal to allow the mayor to overrule district councils so that empty retail spaces can be appropriated. 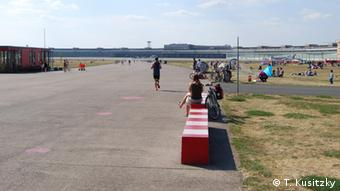 The Tempelhof airfield has become a much-loved park

The city's Social Affairs Minister Mario Czaja has called on owners of empty residential properties to make them available for refugees, and has set up an Internet platform for the purpose. But the city has been grappling with a shortage of affordable housing for many years, and old age pensioners, students, and the unemployed all crowd the same market.

The notion that the city is thinking of confiscating private property has been raised in the media several times - though that cannot happen unless all other resources are exhausted. Nevertheless, Czaja's ministry has already taken over seven private properties - six former office blocks and an empty factory building, the "Berliner Morgenpost" reported - for housing refugees - though with the agreement of the owners. Authorities are even lowering standards so that more properties can be considered for emergency shelters - in other words, properties without bathrooms can be fitted with prefabricated shower containers.

Managing border crossings has become a fairly orderly process for officials, but a painful, cold wait for the migrants and refugees in Austria. Alison Langley reports from the border near Salzburg. (05.11.2015)

In Germany, a job doesn't always cut it

Lately, reports on the German labor market have seemed enthusiastic. The Federal Labor Office announced the lowest unemployment rate in 24 years. All fine then? A closer look at the figures suggest otherwise. (05.11.2015)

German Chancellor Angela Merkel and the leaders of her two coalition partners are due to meet on the refugee crisis. A sticking point has been "transit zones" to identify those without asylum chances on arrival. (05.11.2015)