The heads of Germany's Grand Coalition have announced a basic agreement on the treatment of migrants, including faster processing of asylum requests. Some of the migrants would be required to stay in specific areas. 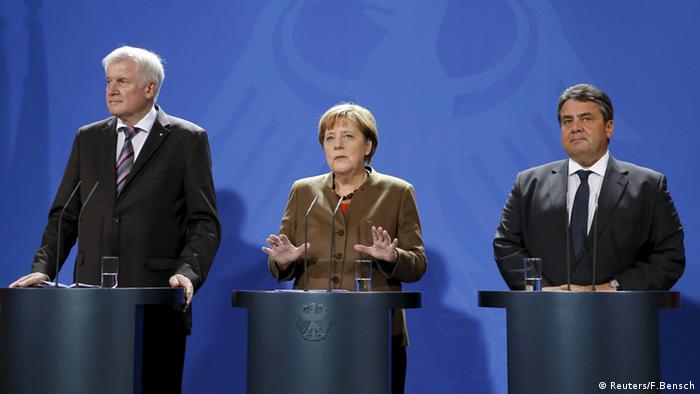 The leaders of Germany's governing coalition parties - Chancellor Angela Merkel, Sigmar Gabriel and Horst Seehofer - agreed on a new strategy to process refugees, the three said in a joint statement on Thursday.

Announcing the agreement, Merkel said the process for many asylum seekers would be sped up.

"We need to show that we are an open and a tolerant country, but also a country which respects its constitution," she told reporters.

Officials are set to create three to five registration centers for the newcomers, speeding up the processing of asylum applications. At least two of them are to be created in Bavaria, the German state that has seen most of the influx.

Refugees would be requested to stay in predetermined areas near the centers, harming their chances of a successful application if they broke the residency rules. If the immigrants leave the area more than once, their asylum request would be automatically denied.

However, under the agreement, there would be no guarded "transit zones" on the German border, as proposed by the Bavarian conservative CSU but opposed by Gabriel's Social Democrats (SPD).

Head of the Christian Social Union, the Bavarian sister party to Merkel's Christian Democratic Union, Horst Seehofer denied that his party wanted to put refugees in jail for leaving the designated areas.

"Our first priority is the humane treatment of people coming to us," he said.

Most of the measures agreed Thursday would only apply to migrants from so-called safe countries, specifically Albania and Kosovo, whose applications are routinely denied by the German authorities.

The coalition heads have expressed hope that the speedy return of such refugees free up resources for those truly threatened.

According to the coalition representatives, the Berlin government intends to create a new refugee ID, which the migrants would need in order to place an asylum requests and ask for state support. In addition, refugees would be asked to pay part of the expenses for the German courses provided upon entering the country.

Up to a million refugees

In addition, some categories of migrants would not be allowed to bring in family members before spending at least two years in Germany.

Germany is expecting between 800,000 and a million people to apply for asylum this year alone, more than double the number than in previous years.

Have something to say? Add your comments below. The thread will remain open for 24 hours.