Sneaker fanatics who didn't manage to get their hands on Adidas shoes that double as Berlin public transit tickets have one last chance. BVG is auctioning off the last two pairs for charity, but they're not cheap. Berlin's public transportation company Berliner Verkehrsbetriebe (BVG) placed its last two pairs of Adidas sneakers up for auction on eBay on Thursday, saying they will donate the proceeds to a local charity to benefit the city's homeless.

"'They'll all end up on eBay anyway,' you said. Fine, then we're auctioning off our last two pairs to benefit the Kältehilfe [a charity that offers shelter to the homeless during the winter], since many people sleep outside, even if there's not a sneaker sale," BVG wrote on Twitter.

Hundreds of people waited for hours in the cold — including some who'd camped out for days — for the shoes to go on sale at Adidas on January 16.

The tongue of the sneakers serves as a year-long ticket to ride Berlin's buses, trams and subways — but the person has to be wearing the shoes for the ticket to be valid. The pattern on the shoe is the same as the infamous, graffiti-resistant covering of Berlin's subway train seats. 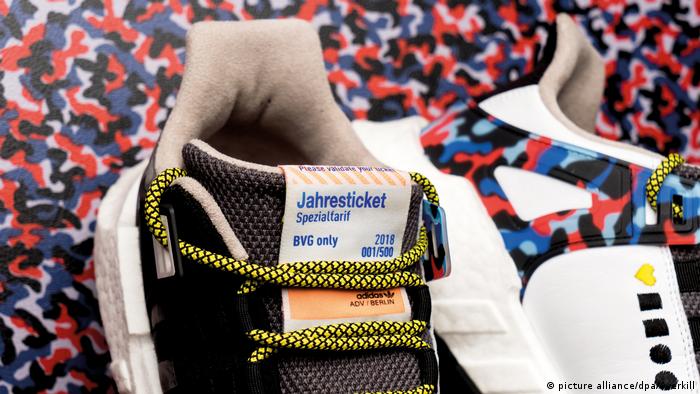 The two pairs — sizes 41 1/3 and 44 (US sizes 8 and 11) — are two so-called "sample copies" of the shoes and are not part of the 500 numbered and limited pairs that were previously sold, reported German newspaper Berliner Morgenpost.

"We decided not to have the shoes sit in a display case with us. Rather, we wanted to make these two pairs available to fans as well — and to do something good at the same time," BVG's marketing head Martell Beck said in a statement.

The shoes originally sold at Adidas stores for €180 — a year-round ticket for the BVG normally costs €730.

BVG partnered with Adidas to make the shoes in honor of the public transport company's 90th anniversary.