Three villages were evacuated in the northern German state of Brandenburg as 400 hectares of forest went up in flames outside Berlin. The fire ignited World War II and Soviet munitions dumped in the ground.

The German state of Brandenburg, which surrounds Berlin, was dealing with one of the biggest forest fires in its postwar history on Friday as an area of around 400 hectares had begun burning the previous day.

The fire produced so much smoke that people in Berlin 60 kilometers away phoned emergency services on Friday morning, while Brandenburg locals heard explosions in the forest as old World War II munitions were set off.

Army helicopters, police riot trucks with water cannons, and firefighters from all over the state had been drafted in to beat back the flames. Brandenburg has seen 300–400 small forest fires in the last few weeks, with the causes of the fires still under investigation.

Over 500 people from three villages had to be evacuated on Thursday, with most able to find beds among acquaintances and holiday apartments in the nearby town of Treuenbrietzen, which meant that only around 20 people had to be put up in the town's sports hall.

By early afternoon on Friday, the fire had been contained enough for residents of one of the villages, Frohnsdorf, to be allowed to return to their homes. Brandenburg State Premier Dietmar Woidke appeared at the hall in person to give them the good news, though he warned that around 250 hectares of forest were still on fire.

But in the early evening, Woidke returned to the hall to tell evacuees from the other two villages, Tiefenbrunnen and Klausdorf, that they would not be allowed back home overnight. Residents would, however, be allowed a one-hour window to return to their homes to fetch any necessary belongings and take care of pets. "It can and probably will take days until the situation is safe," he said. This was, he added, the worst fire situation that Brandenburg had faced in 20 years, and that the neighboring state Saxony-Anhalt had offered emergency equipment including extra helicopters.

Despite the relief, and the solidarity displayed by locals, the fire had clearly affected the small community. Some of those who had come to the sports hall to get breakfast and information, most of them elderly, were in tears as they described the evacuation. There was considerable relief at the news that not a single home had been damaged.

Joachim Kaiser, who has lived in Frohnsdorf for 54 years, said he and his wife had been given about half an hour to pack essentials for the night, though he was full of praise for the rescue workers and the local authority's organizational acumen.

"We were really worried," he told DW. "We live right by the forest — I just need to take five steps and I'm in the middle of it. But I have the greatest respect for how everything was done." 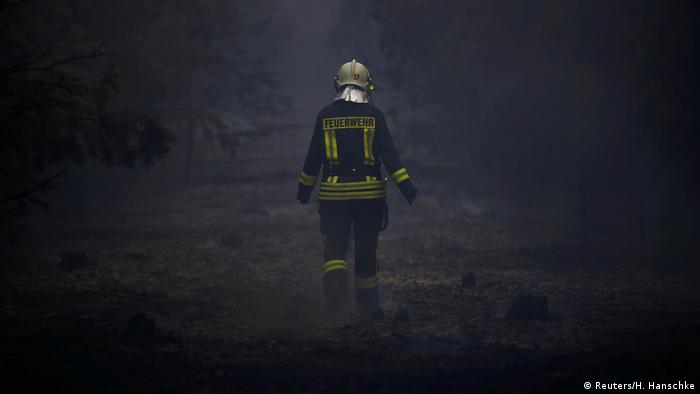 A firefighter at the scene of the blaze just outside Berlin

Kaiser also described how the first firefighters to arrive on Thursday afternoon used chainsaws to clear the path for the fire trucks, while other locals were concerned that the forest tracks would be too narrow to get access to fire.

"How are they going to do it?" one distressed man said. "There's not enough room. They can only do it from the air."

Another longtime resident, Herbert Zienicke, said it had been "very worrying" when he first noticed the smoke in the air at lunch time on Thursday. "I said to my wife, 'we really need to close the windows, there's smoke coming'," he told DW. "People were restless, standing on the street, talking, everyone asking each other what they knew. Then at about 5:30 p.m. the information came through that Frohnsdorf would probably have to be evacuated."

State Premier Woidke fielded a few press questions on Friday morning. Despite the relative calm among the handful of people in the hall, "the general situation remains very tense," Woidke told reporters. "The fire services are very worried that the wind is constantly changing, which could cause areas they think have already been extinguished to burst into flames."

Woidke described the effort shown by the firefighters as "almost super-human." He also had time to praise the people of the town, who were "helping where they can." "Farmers are making their irrigation trucks available to transport water, skilled laborers are calling us asking: 'what can we do?'," he said. "People are calling from all over the state to ask if they can donate." 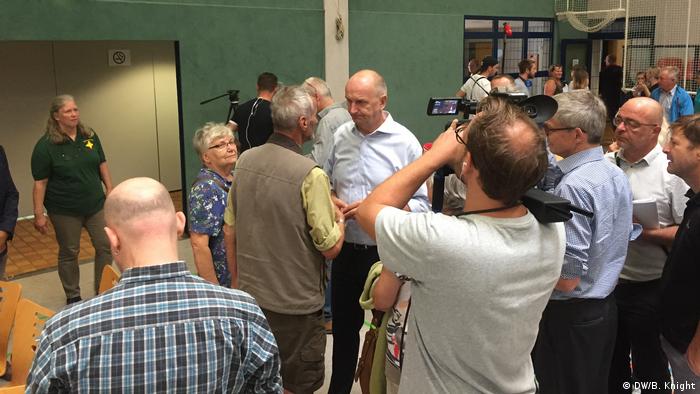 It was, everyone at the sports hall agreed, the worst forest fire since a particularly big one in the 1970s, though that had been further away from the town.

Munitions dumped in the forests during World War II, and subsequently by the Soviet Army, which once used the surrounding countryside as a training ground, posed a "huge danger" to the firefighters, said Woidke.

"We in Brandenburg are in a very special situation here," he said. "We have areas of around 100,000 to 120,000 hectares all around Berlin that have old munitions in the ground. Of course that is a huge danger in a forest fire situation because it stops rescue workers getting to the fire."

A rare forest fire near Potsdam, outside Berlin, has caused some World War II munitions to explode, hampering firefighters. The fire is now reported to be under control. (27.07.2018)

WWII munitions stored illegally by a German collector have blown up amid high temperatures, injuring no one, but causing a police operation. The collector said they were bought at a flea market. (30.05.2017)

A local mayor has said that while the region has often had forest fires, they have never been of this magnitude. The fire has spread to the size of 400 football fields. (24.08.2018)