Forest fire outside Berlin sets off WWII munition | Germany | News and in-depth reporting from Berlin and beyond | DW | 27.07.2018

A rare forest fire near Potsdam, outside Berlin, has caused some World War II munitions to explode, hampering firefighters. The fire is now reported to be under control. 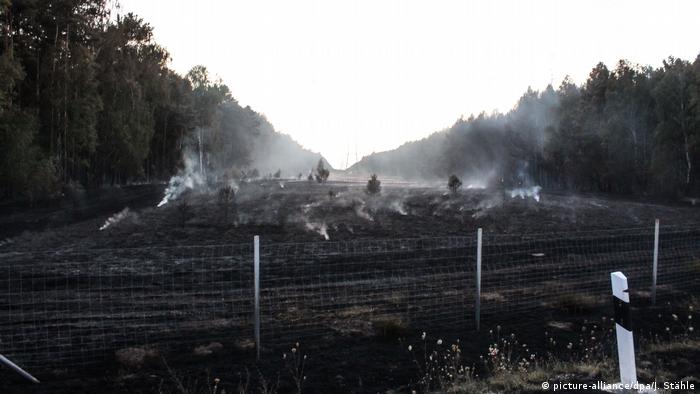 Firefighters in the northeastern German state of Brandenburg spent the whole of Thursday night subduing a forest fire near Potsdam outside Berlin.

"The danger has been allayed for now," local counsellor Christian Stein told Berlin's Der Tagesspiegel newspaper, before adding that the 200 firefighters had successfully prevented the fire from endangering nearby homes — with the help of a foam carpet acting as a barrier and police and military helicopters.

The fire eventually got to within 500 meters (550 yards) of the village of Fichtenwalde, near Beelitz, a small Brandenburg town famous for its annual asparagus harvest.

An evacuation of around 200 to 300 people had already been prepared, with authorities asking locals to pack clothing, medication, and personal documents on Thursday afternoon, but proved unnecessary. Local authorities have banned grilling in public areas and smoking in or near forests.

Local counsellor Wolfgang Blasig told public broadcaster RBB that a disaster had been "narrowly averted," while the state forest fire protection commissioner Raimund Engel said, "We're well prepared, but if we have multiple fires we'll have a problem."

Read more: How to prevent cooling from warming up the world

The operation was made more difficult by winds and World War II munition buried in the forest floor, which caused several explosions.

The current northern European heat wave has also triggered several fires in Sweden, Greece, and northern England in the past few weeks.

In Germany, the hot weather has caused shipping cargo on the River Rhine to be halved and threatened fish populations as water temperatures rise.

Meanwhile, urban police forces across Germany have taken to challenging each other via Twitter to use their riot control vehicles to water their cities' greenery.

The Berlin police tweeted about its own efforts on Thursday in response to an initiative from colleagues in Hamburg and then challenged police forces in Frankfurt, Munich, and Vienna to follow suit.

Japan has issued fresh health warnings amid temperatures of 40C (106F) that extremely hot days "are expected to continue until early August." Japan has recorded its highest ever temperature during the deadly heat wave. (23.07.2018)

Inside Europe: Deadly fires in Greece