Rescuers have discovered more bodies in gutted homes, raising the death toll to 81. US combat drones and surveillance aircraft were being used to determine whether Monday's fires had been started deliberately. 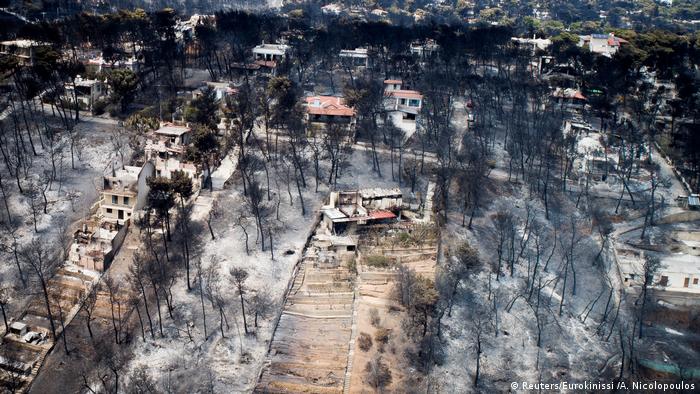 Searchers went house-to-house on Wednesday looking for more casualties in the aftermath of Monday's deadly wildfires near Athens.

They combed through the sea in a bid to locate people still missing after many fled to the water to escape the flames.

Officials also began the grim task of identifying bodies. With most of the corpses badly charred, identification of the dead will be challenging, experts said.

At least 81 people are now known to have been killed in the worst wildfires in Greece in more than a decade.

The fires, which engulfed homes and vehicles, started burning out of control on both sides of Athens on Monday, with the areas around Rafina and Kineta being the hardest-hit.

DW's Charlotte Chelsom-Pill, who is in Mati, near Rafina, said the blaze in the resort town was now out but dozens of people were still thought to be missing.

How are authorities responding?

Flags across Greece, including those at parliament, public hospitals and the ancient Acropolis in Athens, flew at half-mast after Prime Minister Tsipras declared three days of national mourning.

The Greek government had sought help in fighting the fires from the European Union.

What caused the wildfires?

Fires are not uncommon in Greece during summers when temperatures can reach 40 degrees Celsius (104 Farenheit).

The last time wildfires caused such a loss of lift in the country was in 2007, when 77 people died on the southern island of Evia.

Authorities have not ruled out that Monday's blazes could have been started by criminals out to ransack abandoned homes. Fifteen fires had started simultaneously in three areas around Athens.

Supreme Court prosecutors are investigating the causes of the wildfires.

Defense Minister Panos Kammenos said US surveillance aircraft were gathering footage to try to determine whether the fires had been started deliberately.

Greece: Many killed in forest fires near Athens

Major wildfires on either side of Athens are raging out of control, with at least 74 people reported dead. People evacuated to beaches and into the sea, where coast guard boats struggled to rescue them. (24.07.2018)