The baby dugong, which washed up in waters off southern Thailand months ago, has died from a stomach infection caused by swallowing bits of plastic. Marium's death once again casts a spotlight on plastics in the ocean. 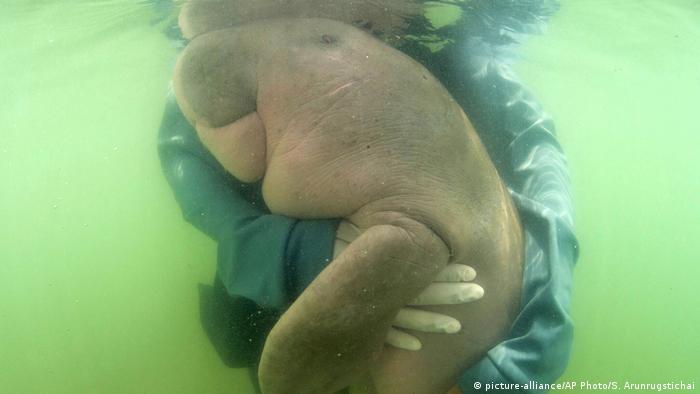 An 8-month-old dugong, which had won the hearts of many people after being found on a southern beach in Thailand in April, has died from an infection caused by plastic in her stomach and intestines, officials said on Saturday.

Marine biologists said the baby dugong's death was caused by a combination of both shock and indigestion.

The female dugong — a large ocean mammal — was named Marium. She gained celebrity status in Thailand after images of biologists rescuing and feeding her milk and seagrass went viral on social media.

According to Chaiyapruk Werawong, the head of Trang province marine park, Marium died just after midnight after going into shock as efforts to resuscitate her failed. "She died from a blood infection and pus in her stomach," he said, adding that small amounts of plastic waste were found in her intestinal tract.

The dugong is a species of marine mammal similar to the American manatee and can grow to about 3.4 meters (11 feet) in length. It is listed as a vulnerable species by wildlife conservation organizations.

Read more: Endearing but endangered: dugongs in the Philippines

Last week, Marium was found injured on the shore. Jatuporn Buruspat, the director general of the Department of Marine and Coastal Resources, told the Agence France-Presse news agency that she was allegedly being chased, and had been attacked, by a male dugong during the mating season.

Marium was brought in for treatment in an artificial sea on Libong Island in Krabi province.

"We assume she wandered off too far from her natural habitat and was chased and eventually attacked by another male dugong, or dugongs, as they feel attracted to her," Jatuporn said Saturday.

"She must have thought these plastics were edible," Jatuporn added.

"We could partially treat the respiratory infection but the obstruction of plastic rubbish ... could not be cured," veterinarian Nantarika Chansue said in a Facebook post, saying that the baby dugong's death should serve as a lesson.

The Department of Marine and Coastal Resources announced Marium's death on its Facebook page. The post quickly garnered more than 11,000 shares and thousands of comments mourning the loss.

Thailand's Natural Resources and Environment Minister Varawut Silpa-arcpha said Marium's death saddens the whole country and people across the globe. "Her death will remind Thais and people all over the world not to dispose of trash into the oceans," Varawut said at a news conference.

Images of plastic debris-strewn beaches and stomachs of dead fish full of plastic materials have sparked global outrage, with environmental activists calling for stricter action to deal with the environmental hazard.

Read more: Multinationals polluting oceans with plastic in the Philippines