Belarus: US to impose sanctions over plane diversion

The US has said it's working with partners in the EU on a list of punitive measures targeting key members of the Belarusian government. The move is a response to the arrest of a dissident journalist on a Ryanair flight. 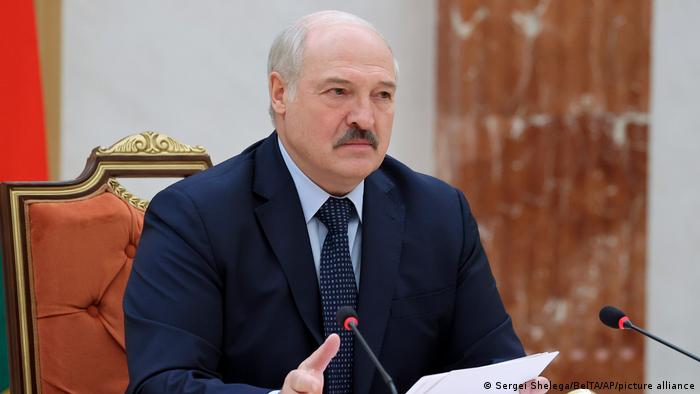 The White House on Friday said the United States will target officials and businesses in Belarus with sanctions in response to an incident last week during which Belarusian authorities forced a commercial flight to land in Minsk and arrested a journalist on board.

What are the new US measures?

Psaki said the US is working with the EU and "other allies" to draw up a list of targeted sanctions against key members of President Alexander Lukashenko's government "associated with ongoing abuses of human rights and corruption, the falsification of the 2020 election, and the events of May 23."

The US will also re-impose "full blocking sanctions" against nine Belarusian state-owned enterprises, which are companies that had been previously granted sanctions relief by the US Treasury Department.

Under the updated measures, people in the US will no longer be able to carry out transactions "with these entities, their property, or their interests in property."

The White House said these measures will come into effect on June 3.

The US Treasury Department is also developing a new executive order to give the US "increased authorities to impose sanctions on elements" of the regime, and "those that support corruption, the abuse of human rights, and attacks on democracy." This executive order will be reviewed by US President Joe Biden.

In addition to the sanctions, the White House issued a "do not travel" warning for Belarus to US citizens. It also warned US passenger planes to "exercise extreme caution" if considering flying over Belarusian airspace.

What happened with the plane in Belarus?

On May 23, authorities in Belarus forced a Ryanair plane to land in the capital, Minsk, citing a bomb threat. They sent a fighter jet to ensure that the passenger plane, which was flying from Athens in Greece to Vilnius in Lithuania, would land.

After landing, authorities arrested 26-year-old Raman Pratasevich, an exiled Belarusian dissident and blogger, who was on board.

He had left the Belarus in 2019, shortly before pro-democracy protests swept the country, which has been dubbed "Europe's last dictatorship."

The EU and Group of Seven (G7) wealthy economies — Canada, France, Germany, Italy, Japan, the United States and Britain  — have condemned the incident.

EU ministers met earlier this week to discuss a new round of economic and sector-specific sanctions for Belarus, as well as those against individuals linked to Lukashenko's government.

Russian President Vladimir Putin has promised to transfer the "conventional and nuclear versions" of the Iskander-M missile systems to neighboring Belarus in the coming months.