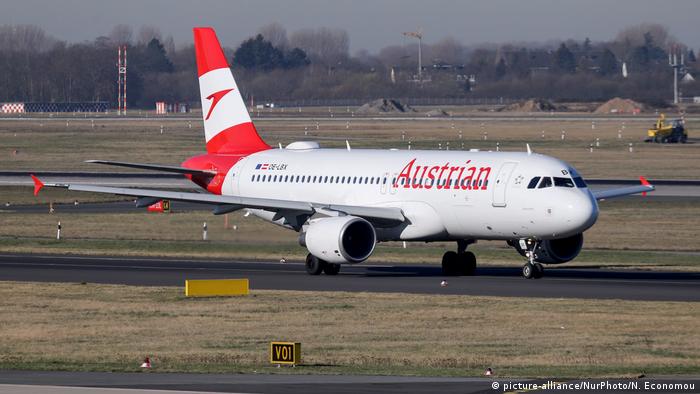 Austrian Airlines is a subsidiary of Germany's Lufthansa

Austrian Airlines said it canceled a cargo-passenger flight from Vienna to Moscow on Thursday.

Flight OS601 from Vienna was scheduled to arrive in Moscow on time, but the board at Domodedovo airport listed the flight as canceled. Earlier, the airline had refused to transit through Belarusian airspace on the way to Moscow.  The European Union has urged its airlines to avoid Belarus and its airspace following Sunday's forced landing in Minsk of a Ryanair plane and the arrest of dissident journalist Raman Pratasevich.

A representative of Austrian Airlines told the Interfax news agency that the new flight route needed to be confirmed with the authorities.

"The Russian authorities have not given us this permission," the spokeswoman was quoted as saying in the Russian-language report.

Austria's Foreign Ministry said Moscow's stance was "absolutely incomprehensible to us" and slammed the ban as a disproportionate response.

Vienna called on Moscow to clarify its position and added that all flights over and to Russia should be able to continue without problems.

Also on Thursday, EU foreign ministers in Lisbon vowed to continue to increase pressure on Belarusian President Alexander Lukashenko. Foreign ministers of the Group of Seven called for the "immediate and unconditional release" of Pratasevich.

The parents of detained journalist Pratasevich also urged the international community to help free their son.

"I want you to hear my cry, the cry of my soul. So that you understand how difficult it is for us now and how much we are experiencing this situation,'' Natalia Pratasevich, the reporter's mother, said at a news conference in Poland. "I am begging you, help me free my son.''

Kremlin is 'not in charge of controlling air traffic'

"The presidential administration is not in charge of controlling air traffic. We recommend you to address this question to our aviation authorities," Peskov told journalists according to Interfax.

Meanwhile, Belarusian national carrier Belavia cancelled flights to eight countries on Thursday. Belavia announced the cancellations were "due to flight bans from a number of countries," after neighboring Poland joined a growing list of territories that have barred its overflights.

"We regret that our passengers have to face this situation for reasons beyond the airline's control," Belavia said as it scrapped flights to Amsterdam, Barcelona, Berlin, Brussels, Frankfurt, Hanover, Kaliningrad, Milan, Munich, Rome, Vienna and Warsaw until Oct. 30.