Security officials in Belarus have raided the homes of several independent journalists as part of an ongoing crackdown. University students have been imprisoned for protests. 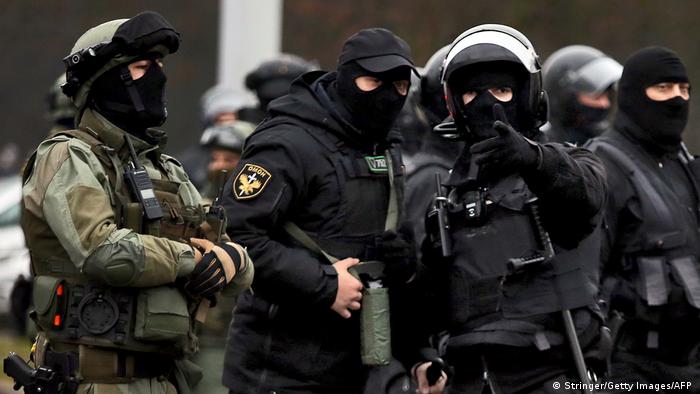 Belarusian police on Friday carried out a third successive day of raids across the country against journalists and human rights activists.

The raids follow searches by the country's notorious KGB earlier this week of offices of a dozen human rights, news and opposition groups.

The swoops appear to be the latest in what opponents of President Alexander Lukashenko called a new crackdown.

Who are the latest targets?

The Belarus security agency, that is still called the KGB, like it was in Soviet times, arrested 32 journalists in Friday's raids for what it called "extremist activities."

The broadcaster Radio Free Europe/Radio Liberty on Friday said security services had searched the home of the head of its Minsk bureau, Valentina Zhdanko.

Other journalists who work for the outlet also reported raids, with at least one of them arrested and taken for questioning.

Meanwhile, three journalists working for the opposition channel Belsat said their homes had been searched, as did an independent journalist based in the western city of Grodno.

"The authorities are using an entire arsenal of repressions against journalists — intimidation, beatings, searches and arrests," said Andrei Bastunets, of the journalist's association.

Also on Friday, a teacher and 11 journalists were sentenced to two and a half and two years in prison respectively for organizing protests last fall.

Belarus in new standoff with EU

"Such a crackdown is completely unacceptable," said Bachelet, accusing Minsk of showing "blatant disregard... for their obligations under international human rights law."

Lukashenko earlier this week vowed to "find and bring to justice" all of his country's "wretched NGOs."

The authoritarian leader — who has ruled the former Soviet republic since 1994 — sparked mass protests by claiming to have won a sixth presidential term in an election last year.

That drew condemnation from the West, whose leaders say the vote was not free or fair.

The European Union's foreign policy chief, Josep Borrell, called the repression "a systematic and well-orchestrated campaign... to silence all remaining dissident voices... in Belarus." He added that the EU was "ready to consider further restrictive measures in line with its gradual approach."

Lithuania says Belarus is using migrants as a weapon