Massive anti-government rallies swept the nation in 2020. Europe's "last dictatorship" is cracking down on dissent in a bid to maintain control. 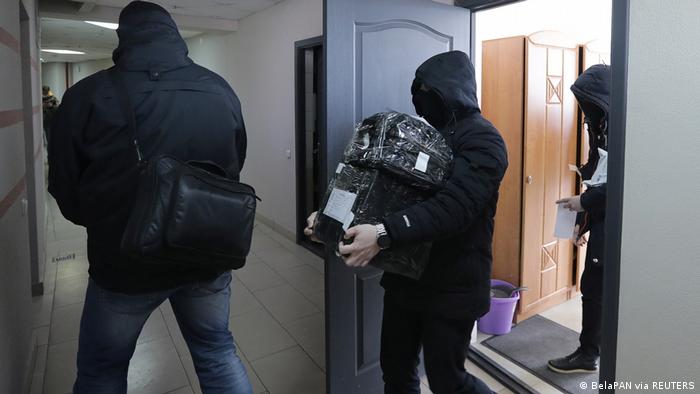 Police in Belarus carried out more than 20 raids on the homes and offices of journalists, human rights activists and trade union members on Tuesday. The raids were part of an investigation into mass anti-government protests, officials said.

The former Soviet nation has been gripped by weekend protests ever since strongman President Alexander Lukashenko claimed victory in a disputed election on August 9, 2020.

But authorities clamped down hard on the public resistance, detaining tens of thousands of demonstrators and opposition members. 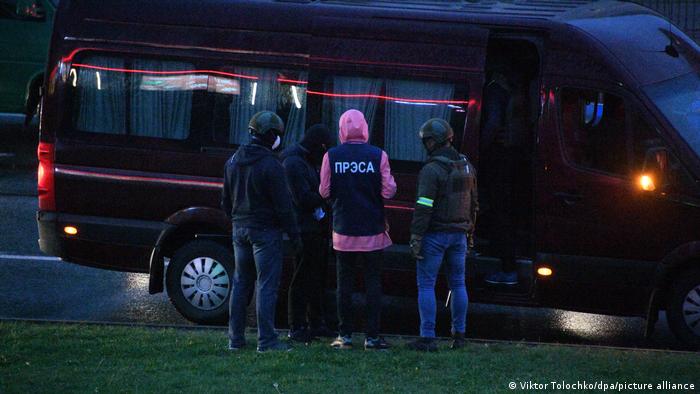 The home of Belarusian Association of Journalists (BAJ) chief Andrei Bastunets was raided. According to the BAJ, Bastunets was detained by police, but later released.

The human rights organization Viasna also said it was targeted. Authorities seized phones and other devices, and several members were detained, the organization said in a statement.

Peter Stano, EU Spokesperson for Foreign Affairs and Security Policy, commented on the raids to DW, criticizing the actions against activists and journalists as a "complete violation of their fundamental freedoms, human rights and the rule of law."

He said that the continued law-enforcement crackdown "is unacceptable. Hundreds of politically motivated trials have taken place. Belarusians have been denied the most basic rights, including the right to fair trial and the right to humane treatment in custody," Stano continued.

Since the "fraudulent" August 2020 elections, "hundreds of documented cases of torture have been collected to date," Stano said.

Belarus's Investigative Committee, a body charged with probing major crimes, said they were part of a probe into the "organization and preparation of actions that grossly violate public order."

"As part of a preliminary investigation to establish the circumstances of the financing of protest activities, investigators initiated searches on organizations positioning themselves as human rights defenders," the Investigative Committee said in a statement.

Harassment through searches, arrests and criminal prosecution of journalists and human rights defenders, including Council of Europe (CoE) and UN partners is unacceptable, tweeted the CoE's Commissioner for Human Rights Dunja Mijatovic.

"Freedoms of expression, association and assembly should be ensured according to international human rights standards," she added.

"A sad new climax of harassment against journalists has been reached" with the raids, Germany's Journalist Union, the DJV said in a statement to DW. "The repression against independent media must end. Arrested journalists must immediately be released."

The government has come down hard on independent media during the anti-government protests.

Belarus canceled all accreditation for foreign journalistsin October 2020 in response to EU sanctions.

Police detained journalists a total of 477 times last year, according to the BAJ.

Two journalists were due in court Tuesday on charges of organizing and preparing protests. The charges can carry a maximum penalty of three years in prison.

Democracy is the only way forward says the EU

Responding to government actions, the EU has imposed sanctions against 84 individuals and 7 entities responsible for the on-going repression and intimidation of peaceful demonstrators, opposition members and journalists, as well as for misconduct of the electoral process, related Stano.

Though further sanctions could be adopted, "the EU firmly believes that only democracy, the rule of law and conducting free and fair elections in respect of the democratic will of the people of Belarus is the only way forward," said Stano. Only this "will guarantee the long-term stability and sovereignty of Belarus," he continued.

US: Trial delayed in George Floyd case 30m ago